The Dangers Of 5G

Our modern technology usually comes with unforeseen dangers.  Sometimes those dangers are known but simply ignored.  Simply put our society demands convenience and we don’t pay any attention to the ramifications of those demands. I have heard for years that there is a danger of radiation from cell phones, but we keep plowing forward into a area that has exhibited probable problems.

There are so many articles that have been written on this and there have been so many studies done on this subject that we ignore because the convenience of the technology has made us more efficient and profitable. On this site you will find articles of Child cancer, Buying and EMF Safe Property, wifi appliances and the effects of computers, monitors and wireless mice.[1]  One of governments encroachments in this area is their insistence on smart meters.  They have been known to cause health problems as well as feed information to them that is violation of our 4th Amendment.  I did a series on Smart Meters in 2017 which can be read here.[2] 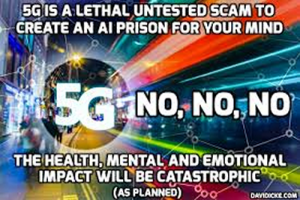 5G will expose us to more radio frequency: Data from 3 major cancer registries demonstrate increased incidences of glioblastoma multiforme (a  very  aggressive  form  of  brain  tumour)  in  the  frontal lobe,  temporal  lobe,  and  cerebellum, despite  decreased  incidences  in  other  brain  regions. Although  this  may  represent an effect  of diagnostic  bias,  the  incidence  of  both  large  and  small  tumours  increased  in  these  regions.  The cause  of  these  observed  trends  is  unknown.  So  said  Zada  (2012);  maybe  it  has  something  to  do with  mobile  phone  use?  Dobes  had  found  a  significant  increasing  incidence of  primary  brain tumours  between  2000  and  2008  (2011), including glioblastoma  multiforme (2011) particularly after 2006.  De Vocht reported (2016) that malignant neoplasms of the temporal lobe had increased faster than expected. A latency period of  10 years reflected the earliest latency period when this was  measurable  and  related  to  mobile  phone  penetration  rates,  and  indicated  an  additional increase  of  35%  during 2005-2014.  Bortkiewicz  (2017) carried  out  a  meta-analysis  of  twenty  four studies (26 846 cases, 50 013 controls) reported up to March 2014. A significantly higher risk of an intracranial tumour (all types) was noted for the period of mobile phone use over 10 years.[3]

The introduction of newer and stronger electromagnetic fields can have a serious effect on not just the human body but our environment, animals, plants and so on. Some people seem to be up to 100 times more sensitive to their biological systems being affected by  external  sources of  electromagnetic  fields,  either  at  low  (power frequency)  or  high  frequency (including  mobile  phone  communications  technology),  than  others  (Leitgeb 2003, 2007).  The condition  they  have  is  referred  to  in  a  variety  of  ways;as  electrosensitivity,  or  as  electrical sensitivity or hypersensitivity. This condition is referred to as ES throughout this article.

Human  beings,  and  all  other  living  creatures,  have  always  been  exposed  to  electromagnetic fields. The sun’s radiation levels  and  the  natural  earth  energies  are  what  the  human  being  has evolved  with  and  adapted  to.  So  the  sceptics  ask,  how  come  we  are  suddenly  talking  of  a sensitivity to electromagnetic fields when we have never reacted before?

Things have changed, that’s why.  The  density  of  electromagnetic fields  around  us  is  now  many hundreds  of  millions  of  times  the  natural  level  reaching  us  from  the  sun  and  other  sources.  We have not had the time even to begin to adapt to the radiation from our use of  electricity, mobile phones and telecommunications masts, and proliferating wireless technologies. [4]

We are always wanting bigger and better, which is not always bad but we should proceed with caution.  Who doesn’t want faster, bigger (or smaller), more efficient? Take wireless mobile telecommunications. Our current broadband cellular network platform, 4G (or fourth generation), allows us to transmit data faster than 3G and everything that preceded. We can access information faster now than ever before in history. What more could we want? Oh, yes, transmission speeds powerful enough to accommodate the (rather horrifying) so-called  Internet of Things. Which brings us to 5G.

Until now, mobile broadband networks have been designed to meet the needs of people. But 5G has been created with machines’ needs in mind, offering low-latency, high-efficiency data transfer. It achieves this by breaking data down into smaller packages, allowing for faster transmission times. Whereas 4G has a fifty-millisecond delay, 5G data transfer will offer a mere one-millisecond delay–we humans won’t notice the difference, but it will permit machines to achieve near-seamless communication. Which in itself  may open a whole Pandora’s box of trouble for us – and our planet.[5]  More studies can be found here that cover subjects such as mobile phone related hazards, hearing, tinnitus and a myriad of other things.[6]

If you’re really technical this site has a lot of articles concerning adverse biological effects or damage to health from Wi-Fi signals, Wi-Fi-enabled devices or Wi-Fi frequencies (2.4 or 5 GHz).[7]  If you haven’t noticed the government isn’t looking out for you on this. They are even demanding that you use the smart meters. We are on our own, which we should be, but we should have some protection from the government.  They don’t protect us from GMO products, in fact do all they can to not let us know what is in the food we eat which is the opposite of why we have the FDA.  They allow glyophosate, agent orange, to be sprayed on our food and on our lawns, which is what the EPA is there to stop, but they don’t. They won’t do anything about 5G either.  If anything is to be done, it will be up to us to do it.  I’ve always said, ‘Stay informed to stay free’ but now we have to stay informed to stay healthy.