The Deadly Contagious Virus Of Islam

The Disease of Islam

Risking the violation of political correctness, decades of closely and carefully studying Islam, has led me to the following observation: Islam is a socio-cultural viral disease that invades any vulnerable host with its malignancy, while simultaneously devouring its own adherents. 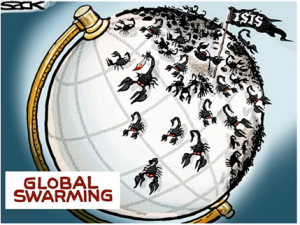 In other words, Islam is like a deadly, contagious disease. Once it invades the mind of its victim, this debilitating disease is capable of transforming him or her to a helpless pawn that has no choice but to execute what he or she is directed to do.

Of the reported 1.6 billion Muslims in the world, millions are already trapped in the terminal stages of this affliction, while millions of others are rapidly joining them. The people enslaved with the extreme cases of Islamic mental disease are highly infectious. They actively work to transmit the disease to others, while they themselves engage in horrific acts of mayhem and violence to demonstrate their unconditional obedience to the dictates of the Islamic cult of violence; for example, the Islamic State or “ISIS”

Islam like a mental retrovirus has mutated into numerous varieties and degrees of severity over the past 1,400 years. Everyone born in a Muslim family, as well as those who convert to Islam, contract a particular mutation of the Islamic virus. As is the case with all retroviruses, the Islamic virus burrows deeply into the person and erupts, from time-to-time with potentially devastating consequences.

The Islamic virus first divests the person of his most fundamental human attribute. It takes away his right to make decisions himself and absolves him and in return, of any responsibility for his actions rendered in blind obedience to it. 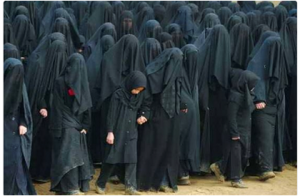 The founder of Islam, Mohammad, insured the faith would remain on its intended mission by providing it with its manual of murder and mayhem, the Quran. The Quran is the incubator of the virus of Islam, and Muslims are the carriers of this disease who communicates it to others while they themselves simultaneously are devoured by it.

Even a cursory glance at Islam clearly shows a history of lashing out at non-Muslim societies under the direct leadership of Muhammad, a practice that has remained on its mission to this day. This inherent divisiveness is clearly evident by the internecine violence within the ranks of believers commencing immediately following the death of Muhammad.

At the global level, the pathology and cognitive derangement systemic to Islam have given rise to the world’s most intolerant, backward, and impoverished societies.

It is in the very design of Islam to engage in violence. Muslims find ready justifications in the Quran–a book they believe authored word for word by the one and only creator of the universe, Allah–to do so. To a Muslim, anyone, even others who profess the same faith, can be a legitimate target of violence since there is no unifying Islamic doctrine, while the Quran is greatly amenable to self-serving interpretation.

It is indeed simplistic to contend that Islamic terrorism is Islam’s problem and that it is self-defeating or it will eventually defeat itself. Islamic terrorism is indeed that aspect of Islam that has lashed out toward the non-Muslim world from its inception. It is seen when the Islamic armies sallied out of the Arabian Peninsula to vanquish by the sword people far and near. It is indeed a great folly and a pathological denial of reality for the world to turn a blind eye to the ever-virulent acting-out characteristic of Islam, irrespective of its different forms and various degrees of its severity and duration.

As is the case with contagious disease, there is no minimal level of acceptable risk. The only acceptable risk with virulent Islam is its complete decimation. Otherwise, jihadism will raise its head time and again and inflict its deadly venom on its victims.

Islam itself is a vestige of a long-ago primitive people who lived and died by the sword. Muslims do not recognize the legitimacy of coexistence. They never have, and the Quran explicitly divides the world into two camps: The believers and the non-believers. And it is the sacred duty of the believers to cleanse Allah’s world of all non-Muslims.

The Virus Truly is Deadly

In short, Islam is indeed a deadly, socio-cultural communicable virus that is immune to general methods of treatments. The Islam virus has mutated into numerous forms immediately upon the death of its creator. This mutated disease shares only a common name, such as the term used for describing the common cold. In actual fact, Islam is about destruction within itself as well as the “other.”