The Democrats And Stealth Jihad

The relationship between the Muslim community in America and the Marxist Democrats is commonly described as a marriage of convenience, where Muslims will ally with leftist politicians, who will joyfully yield some of their authority to this group of enforcers so principled conservative politicians and Christians who advocate sane social policies are kept out of office. To acquire power has always been the goal of the Democrat party.

While America is in hibernation, Muslim organizations with the help of Democrats have been busy, 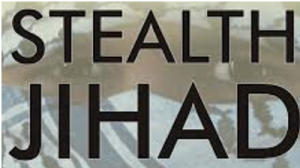 working “stealthily” to change America into what is called “soft jihad.”  Soft jihad is practiced where Muslims are not strong enough to unsheathe the sword of jihad, where the true nature of Islam is exposed and when the public would likely stamp them out.  A critical tool of soft jihad involves penetration of the American educational system, such as Da’wa, the religious duty of each Muslim to convert non-Muslims and strengthen the Islamic Ummah.

The Democrat Party has intentionally put America on a precarious path to lose its freedom and American values we have cherished for over 200 years.  We, not only must accept, but be as vocal as we can to declare the current Democrat Party and enemy of our country. This party is no longer the party of Kennedy.  It has become the greatest threat to our national security and our survival as a nation.

Question: Why do the Democrats support every radical group, back Islamic ideology, honor their holidays 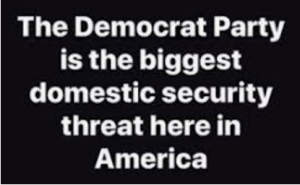 and customs, and promote Islam as “the religion of peace,” while they know that Islam is not a religion of peace? In fact, it is an ideology of death. The answer is quite simple: The Democrat Party stands with anyone who dislikes America and the Republican Party.  History has proven that once Muslims reach close to 10% in population, they institute Sharia law and adopt their own legal system – a government within a government. They also will be in a position of hard jihad.

While most Americans have been snoozing, Muslim organizations have been busy and working “stealthily” changing America slowly. Keep in mind that Islam operates by stealth when not yet quite powerful, just the way Muhammad himself operated. Then, gradually builds its power to the point that the soft approach no longer is necessary to subdue others and imposes its will.

The stealth soft strategy is presently playing out in the United States. Islam’s tentacles are expanding into the body of this free and welcoming nation. The total numbers of mosques, these warehouses of terror, have exponentially expanded. No one really knows the exact numbers of these terror centers, but it is still growing like a weed. Try to find one Church or a synagogue in the House of Saud! This 7th century mentality, with the help of our Democrats and some establishment Republicans have managed to increase their house of terror at least by 500% since the 9/11 attacks. Go figure!!

The left is chronically unhappy about America, because it is looking in the mirror and rightfully sees its own miserable reflection. As an example, for the past two years, these mentally retarded people known as the Democrats created the “Russian Collusion Witch Hunt Hoax” in order to impeach the President of the United States. The hoax was based largely on an anti-Trump “dossier” conjured from the fertile imaginations of two nefarious characters: ex-British spy Christopher Steele; and Fusion GPS Founder, Glenn Simpson.

Meanwhile, the Democrat lawmakers who never seem to miss an opportunity to advance their cause, sent a personalized letter to a the Council on American-Islamic Relations, a designated terrorist group in the United States for future fundraising and assist these terrorist groups to infiltrate our Congress.

Any time anyone arises to serve this great nation and aims to keep it on its course toward its glorious destiny, the left recoils. In the West, an unholy coalition of mentally-deranged suicidal-homicidal liberals, together with self-aggrandizing Islamic apologists, are doing their best to assist Islamists in the destruction of the existing order of freedom and liberty. To make matters worse, a vociferous clique of local leftists, “useful idiots,” with a suicide wish, are doing all they can to take the country with them to the grave they so earnestly seek.

When the Democrats and their new found allies don’t like what they hear they resort to ridicule, accusations and name-calling. In fact, they call everyone their favorite word “racist.” Wouldn’t it be wonderful if these people would, for once, abandon their primitive mindset and use a civilized method of dialogue?

If Muslims wish to live among civilized people, they must be encouraged to reject, if not Islam itself, one of its deadly derivatives, Islamism, which has become a sharp thorn, inflicting huge pain in our civilized society. They must be encouraged to combat radicalism. They must know that the free people of the world eagerly embrace them with open arms once they rise to the occasion and defeat Islamism.

We, in the United States of America must resist both Marxist Democrats and Islamists’ ideology with all we have. The survival of this country depends on that.