The Democrat’s Stealth Jihad Against America

For decades, the Democrat Party has shown by both words and deeds that they despise the U.S. Constitution while they bend over backwards to embrace Islamists, illegal aliens and anyone who hates America. The left is only interested in power and nothing else. Even if it means to sacrifice our national security and advocate open borders.

The liaison between American Muslims and the Democrat Party is frequently described as a marriage of convenience where Muslims will ally with leftist politicians, who will gladly cede some of their power to this group of enforcers so conservative politicians and Christians who advocate self-defense and sane social policies are kept out of office.

While America is in hibernation, Muslim organizations with the help of Democrats have been 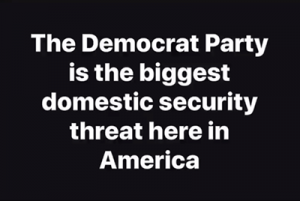 busy and work “stealthily” to change America in what is called “Soft Jihad,” in the United States. Soft Jihad is practiced where the sword of jihad is not advisable, where Muslims are not strong enough to unsheathe their sword, where the true nature of Islam is exposed and when the public would likely stamp them out. A critical tool of soft jihad, involves penetration of the American educational system, such as Da’wa, the religious duty of each Muslim to convert non-Muslims and strengthen the Islamic Ummah.

America is on a precarious path to lose its freedom and American values we have cherished for over 200 years. We must accept that the current Democrat Party is no longer the Party of Kennedy.  It has become the greatest threat to our national security and our survival as a nation.

Many Americans are confused as to why Democrats back Islamic ideology, honor their holidays, customs and promote them as “the religion of peace,” knowing that Islam is not a religion of peace.  In fact, it is an ideology of war.  The answer is quite simple: The Democrat Party stands with anyone who dislikes America and the Republican party. History has proven that once Muslims reach close to 10% in population, they institute Sharia law and adopt their own legal system.  A government within a government.

Some self-appointed prima donnas cover themselves with the shield of academic freedom. Academic freedom is like liberty—it can be abused often and abused greatly. That is the price of freedom. Yet, these abusers of freedom, the far left, will be among the first to be buried under the rubble of a free society’s collapse they work so doggedly to bring about. Muslims love our liberal politicians and will happily ally with them, who then will gladly cede some of their power to this group of enforcers,

I cannot emphasize enough the urgency of this threat. It is indeed urgent that we confront Islamic ideology and its expansionism, close all their chapters across America and declare the Muslim Brotherhood and its affiliates a terrorist organization. All of us, must pressure our government, at all levels, to abandon the practice of ‘political correctness’ and protect and safeguard it against a truly deadly assault that is Islamic ideology.

Sugarcoating Islam is universally practiced not only by leftist politicians and liberal media, but also by the self-described doctors of Islamic religion. They keep ranting about the importance of accepting things on faith, denigrate reason, dangle carrots and sticks, and demand unconditional surrender in return for guaranteed bliss and salvation. Use Jihad of the Sword when it can and use Soft Jihad until the sword can be unsheathed to finish the job. And don’t forget, the end justifies any and all means in Islam.

Regretfully, America’s fortress is no longer safe. We also need to keep in mind that the breach of “Fortress America” from the air on 9/11 is only the first installment of many more forthcoming heinous assaults — unless we abandon our complacency, stop relying on the invincibility of law enforcement agencies, and willingly make the sacrifices that will protect our way of life.

Knowing Islam intimately and having experienced its systemic savagery has compelled me to warn repeatedly of the deadly and imminent threat it poses to all non-Muslims.

For as long as the leftist officials bend over backwards to protect Islam as a endangered species, Islam will thrive and flourish. It is long past the time for our elected officials to wake up and stop their political correctness.