Home/June 2018, Opinions/The Destructive Internet Sales Tax And Those Who Promoted It

The Destructive Internet Sales Tax And Those Who Promoted It

All the world should be taxed —Caesar Augustus

The only difference between a tax man and a taxidermist is that the taxidermist leaves the skin. —Mark Twain

The power to tax is the power to destroy. —John Marshall – Chief Justice of the Supreme Court

What a pity we don’t have more justices on the Supreme Court today like we did with founding father Chief Justice Marshall.   He was the last chief justice who was born a British subject prior to the American Revolutionary War.  He was right…the power to tax is the power to destroy.  Oh, is it ever!  America’s taxes are out of control!

The recent high court decision in South Dakota v. Wayfair, Inc., which overturns an earlier Supreme Court precedent, will boost state revenues at the expense of consumers and sellers who have avoided sales taxes in the past. But the justices did not specify what types of exceptions states may impose to limit the burden on small businesses.

Chief Justice John Roberts dissented (his dissent well worth the read), saying the decision should be left to Congress, and was joined by Justices Stephen Breyer, Sonia Sotomayor and Elena Kagan.  I agree with Justice Roberts, this is a decision which belongs to Congress as they have the final say over regulation of interstate commerce.  The Court reversed the decision of Quill Corp. v North Dakota.

University of Tennessee Law Professor Glenn Reynolds commented, “The Supreme Court allowed states to tax purchases made online from out-of-state sellers. I seem to remember something about “No taxation without representation,” but apparently the majority (weirdly, Kennedy, Thomas, Gorsuch, Alito, and…Ginsburg) forgot that. The opinion is a real piece of work, even going full ‘You didn’t build that’ at one point.  Roberts’ dissent is right on the money, pointing out that such a dramatic change to the internet economy could have far-reaching consequences, and that Congress is much better suited to address the issue.”

In this instance, stare decisis (Latin for “to stand by a decision”) was discarded and obviously not of interest to the five justices who overturned the precedent.  How I wish  they would do the same with Roe v Wade, and NYTs Corp. v Sullivan.

No sooner does Congress do something great like passing a tax reform bill that is already paying dividends for millions than members argue and promote a way to muck it all up.  Not only is this more expensive for customers, it is a massive expansion of state taxing power and a complex and costly new mandate on businesses, and our President endorsed it. [Link] The Hill reports that more than 90 percent of every dollar spent on retail still winds up in the cash registers of brick-and-mortar stores.

The idea of internet taxes isn’t a new one. The 1992 Supreme Court decision (Quill Corp. v North Dakota) stated that a business must have a physical presence within the state in order for the state to collect sales tax when someone purchases from that business.  This was the ruling, and basically it had always been this way.  Years ago, we had catalogues that came via snail mail and if the company had no presence in the state, you did not pay taxes on your orders.  It’s been this way since I was a young bride and probably much earlier.

Legislation was introduced in 2012 to “level the playing field” via the Marketplace Fairness Act, so that local businesses didn’t have “unfair competition” because of the local taxes. Leveling the playing field was another euphemism for helping big box stores and destroying small internet businesses.  The Marketplace Fairness Act fortunately never left a Senate committee.

Former Tennessee Governor, and now Senator Lamar Alexander, tried to sneak a law passing an internet sales tax into the National Defense Authorization Act (NDAA) in early December, 2012. Senators Dick Durbin (D-IL), Mike Enzi (R-WY), and Lamar Alexander proposed a version of the Marketplace Fairness Act as an amendment to the NDAA.  The Senate voted to close debate on the defense bill and proceed to a vote without considering the tax.  Thank God!

Quill v. North Dakota represented a rare instance where the Supreme Court properly interpreted the Commerce Clause. Thanks to the Quill decision, the Internet remained a tax-free zone until now, though some states required consumers to later pay taxes on products they purchased online. This freedom has helped turn the Internet into a thriving and dynamic sector of the economy, to the benefit of entrepreneurs and consumers.

Now that status has been changed by an alliance of big business and tax-hungry state governments seeking new powers to force out-of-state business to collect state sales taxes. Far from updating the Constitution to fit the needs of the 21st century, the National Internet Tax Mandate is a throwback to 18th century mercantilism.

The National Internet Tax Mandate also flies in the face of the original purpose of the Commerce Clause and sets a dangerous precedent. Contrary to modern political thought, the Commerce Clause was not intended to grant Congress unfettered regulatory power. Instead, it was meant to enable Congress to guarantee free trade among the states by ensuring states could not impose onerous regulations or taxes on out-of-state businesses. By giving states the power to impose their sales taxes on out-of-state businesses, the National Internet Tax Mandate flips the Commerce Clause on its head.  Link

Taxation Without Representation is Tyranny.

The Supreme Court decision may be like Valentine’s Day candy for big-spending governors, but it is a chocolate-covered sucker punch for the American people. Those of us who still value low taxes and fiscal responsibility at every level of government will need to join in to save internet small businesses. The politicians who support this mandate and do nothing for the little guys will hopefully receive thorns, not roses, from the American people.  With over 10,000 city, county, and state sales taxes in America, the costs to very small internet businesses are astronomical and untenable.

Online sellers would have to keep track of each state and locality’s definition of what constitutes a taxable good. They would also have to stay up-to-date on thousands of various filing and registration procedures, threshold amounts and sales tax holidays just to remain in compliance. That suffocating deluge of red tape will close businesses, kill jobs and increase the cost of goods to customers.

The operations of small businesses are different than large retailers, and state tax actions targeting them raise additional legal questions that are not addressed by this decision. Congress needs to step in and provide clear tax rules, with a strong small business exemption, to help small businesses take advantage of the internet to grow and create local jobs.

This really is Taxation Without Representation. 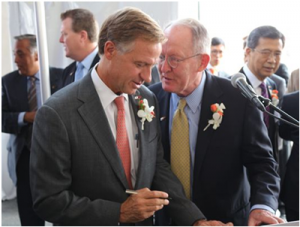 It was Tennessee’s neo-con Republican Governor Haslam who started the ball rolling for internet taxes when he was elected in 2010.  He got together with his good friend, Senator Lamar Alexander (R-TN).

On February 14, 2013, neo-con Trotskyite Senator Lamar Alexander (R-TN) joined fellow lawmakers in reintroducing a bill that would allow all states to require online retailers to collect sales tax just like their “Main Street” rivals, all at the behest of his friend Bill Haslam.  Governor Bill Haslam also spread his desire for internet taxes via the National Governor’s Association. New Jersey’s Governor Chris Christie was on board early in 2014, as were many other governors who wanted and needed more taxpayer dollars in their coffers. The State of Tennessee has billions in rainy-day funds, but they always want more.

Haslam’s 2010 campaign for Governor claimed he was a conservative Christian.  He is anything but.  Thrilled to be invited to the Obama White House, Haslam eagerly joined with Education Czar Arne Duncan to completely destroy Tennessee’s public education.  And Governor Haslam’s good friend, Sen. Lamar Alexander helped Obama lock in common core in America’s public schools. Link 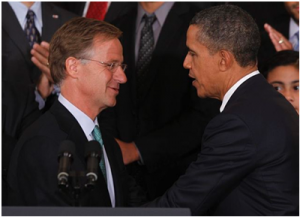 Our Governor promoted Agenda 21 in Knoxville when he was Knoxville City Mayor and then throughout the state when he became Governor. Link

Last year the governor raised our gasoline tax by six cents a gallon for regular and 13 cents for diesel. The Haslam family owns Pilot Oil and Flying J. The gasoline tax monies collected by the stations do not have to be turned into the state for 45 days, and companies like Haslam’s make beaucoup bucks on the interest every month while holding these funds.  Another little monetary plus for his family owned business.

Back in April of 2013, FBI and IRS agents executed sealed search and seizure warrants at Pilot Oil Flying J (PFJ) headquarters in Knoxville, TN as part of an investigation into one of the largest family-owned companies in the United States. Billionaire Jimmy Haslam, brother of Governor Bill Haslam, is the company CEO in addition to owning the Cleveland Browns.

The investigation revolved around the application of rebates to a small group of PFJ trucking company customers and how the small truckers were cheated.  None of the Haslams were charged.

This Scotus decision has hurt all of middle America, and regrettably it’s unlikely it will ever be overturned.

P.S.  Thanks to all the wonderful folks who support NewsWithViews with monthly donations.  CEO Paul Walter publishes articles daily that cover every facet of American life with research in politics, religion and worldwide events.  Every writer works to inform our readers all because of their love of our nation. Please remember NewsWithViews with your monthly donations and tell your friends to sign up for the daily emails.  You can donate here.