“According to socialist Democratic presidential candidate Elizabeth Warren, Facebook and other tech giants such as Google, Twitter, and Amazon should be broken up. In an ironic twist, Facebook immediately validated the senator’s concerns by taking down her Facebook page soon after she called for Facebook’s dismantling.”

“Although it pains me to say this, Warren is right.   In fact, in all likelihood, that’s one area where many conservatives would agree with the socialist-leaning Massachusetts senator.  After all, it’s an established fact that Mark Zuckerberg, CEO of Facebook, along with Jack Dorsey, the CEO of Twitter and many other social media platforms actively and regularly censor conservatives.  It’s not even up for debate at this point. Facebook has admitted its bias.”

“To put it in blunt terms, if you’re a conservative or libertarian, especially a successful and significant one, the statist technological potentates in Silicon Valley don’t like you.  Literally, it’s personal with them.  More to the point, they hate your point of view and will often find ways to prevent your message from being published.  That’s just who they are.”    James Gorrie, Epoch Times 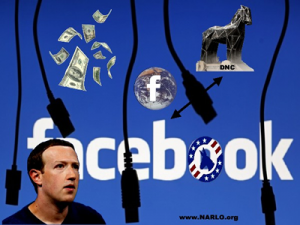 Most of the employees of the three major social media companies and their founders are products of our liberal colleges, not to mention being subjected to three generations of social Democrat indoctrinations in public schools and academia.  That they lean left en masse should hardly be a shock.

Facebook, along with Google and Twitter, the DNC Social Media Trojan Horse, are determined to use their platform and their power and influence to lead America directly into Democrat socialism and purge conservatism from the body politic through direct censorship and massive left-leaning propaganda.  Is it any wonder that millennials are going for socialist Bernie Sanders?

Even knowing this we finally decided to join the masses by creating a Facebook page for the National Association of Rural Landowners, after being urged by many people to do so.  We linked the Facebook page to our website (http://www.narlo.org/) and linked several pages of our website to the Facebook page.  Within a few hours, Facebook blocked our account and started requesting additional information.  We provided the information but it was ignored and by the next day they had disabled our account.

Not wanting to take this lying down, we sent a Certified – Return Receipt Requested letter, under our corporate letterhead, to Mark Zuckerberg at Facebook’s Menlo Park, CA corporate offices, describing our displeasure and strongly suggesting they should be broken up under anti-trust laws.  As you will see, we sent copies to the Facebook board of directors, as well as to the chairman and ranking member of the House Judiciary Committee.   A copy of our letter follows:

Gentlemen, or ladies as the case may be:

Finally, this morning, Democrat-controlled Facebook disabled our account without giving any reason.  But then we know the reason.  Our company is a conservative organization that has been serving the American rural landowner for at least 13 years.  The word “conservative” is obviously the prevailing reason behind the disabling.  There can be no other explanation.  Further, it fits right in with the Democrat-controlled Facebook disabling, or shadow-banning, thousands of conservative Facebook accounts all across America.  Your mission statement is a sham and an outright lie.  We’ve read your statistics.  The Democrat-controlled Facebook Company should be broken up under anti-trust and hopefully the Congress will get off its dead butt and get the job done.  But we won’t be holding our breath.

National Association of Rural Landowners, and

Now we aren’t so naive’ as to expect our puny efforts to have any effect, or force the Congress to take action.  We just couldn’t let the issue die without voicing our anger over what is blatant, in-your-face censorship.

Perhaps some of you have experienced the same treatment from Facebook.  You are welcome to send them a letter to the above address.  If tens of thousands of conservatives loaded up Facebook’s corporate mailbox, or millions cancelled their Facebook account, maybe they would get the message.  Corporations only understand a huge drop in their bottom line.

The heavy-handed control of information and the news by Facebook, Google and Twitter is just another form of socialist Democrat corruption.  If you really want to put an end to this and other forms of political corruption, click HERE.

NOTE: Do you have an old cell phone collecting dust in a drawer somewhere.  NARLO can use them.  If you would like to donate your old cell phone, click HERE.