If that body (Congress) be ignorant, reckless, and corrupt, it is because the people tolerate ignorance, recklessness and corruption. —President James Garfield

Equal and exact justice to all men, of whatever persuasion, religious or political. —President Thomas Jefferson at first inaugural address

Justice is the end of government. It is the end of civil society. It ever has been and ever will be pursued until it be obtained, or until liberty be lost in the pursuit. —President James Madison, Federalist No. 51, February 8, 1788

The Russian collusion investigation was a coup…brought to us by those within the Obama administration and his Department of Justice (DOJ).  Indications point to Obama as the director of this insurrection. It was a conspiracy, it was criminal activity with several violations of U.S. Title 18 code; the most shocking violation of the Constitution in criminal activity in the history, not just of America, but of a western government.

Much of this rises to the level of treason, as well as sedition, as it was a clear conspiracy.  There should be indictments especially when the reality is that the collusion was on the Democratic side and the contrived dossier came from Russian intelligence. These people need to be indicted, charged, and sentenced.  If they’re not, then our Constitution is nothing more than a sham.

The Marxist movement within the DNC is in control right now.  The “regressive” goals of the Marxists fully match what the democrat left is promoting today.

Eliminating our sovereignty is one of their top goals. In order to turn this country into a globalist Marxist government, three things must be destroyed. They have to change the Constitution, especially the first and second amendments.  As Marxists, they despise and target Christianity and want it destroyed because it underlines our Constitution and faith in our Creator mentioned in the Declaration of Independence.  And, they must destroy the very founding principles of America…our culture.

All three of these goals are coming to fruition and this rises to the level of treason.

Mueller Shouldn’t Have Taken the Job

Robert Mueller should never have accepted the appointment of Special Counsel for an investigation into Russian Collusion.  He knew from the very get-go that the dossier was a pile of schmutz, yet it is never mentioned in the final Mueller report.

Victoria Toensing, of diGenova and Toensing Law Firm, stated in her recent WSJ article that, “Justice Department regulations authorize appointment of a special counsel when the attorney general ‘determines that criminal investigation of a person or matter is warranted.’”  She goes on to say that Rod Rosenstein who was then attorney general because of AG Sessions’ recusal, disregarded the criminal conduct requirement and authorized a broad and vague counterintelligence probe, directing the special counsel to investigate “any links” between the Russian government and the Trump campaign.  This was unprecedented and gave a blank check to Mueller, and his gang of Hillary supporting democrat attorneys, the right to go after anyone or anything related to President Trump.

Toensing explains in detail the changes that are needed in the regulations governing the appointment of special counsels. “The rules were written by the Clinton Justice Department in 1999 after Congress declined to renew the law providing for the appointment of independent counsels.”

Her final statement in this important article is, “Mr. Barr’s Justice Department can amend the regulations without Congress, just as Janet Reno’s department wrote the rules two decades ago.  The democrats will scream and yell, but when they control the executive branch, they’ll love the clarity.”

The weaponization of the intelligence community and other government agencies created an environment that allowed for obstruction in the investigation into Hillary Clinton and the relentless pursuit of a manufactured collusion narrative against Trump.

A willing and complicit media spread unsubstantiated leaks as facts in an effort to promote the Russia-collusion narrative.  Link 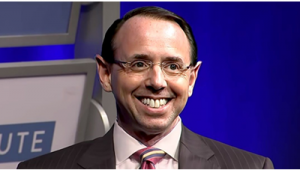 Rosenstein is retiring as of May 11, 2019, and Barr has said, “Rosenstein served the Justice Department with dedication and distinction. His devotion to the Department and its professionals is unparalleled. Over the course of his distinguished government career, he has navigated many challenging situations with strength, grace, and good humor.”

Oh, Right AG Barr, the man who gave a blank check to Mueller and who allowed this improper, illegal, and unparalleled investigation of a sitting president is a devoted professional. This is the same man who protected the Clinton/Obama people, silent on her illicit emails and who signed off on FISA warrants from the bogus Trump dossier, who wanted to use the 25th amendment against the President and offered to wear a wire to record our President.

Excuse the hell out of me, but this is pure hogwash and I hope Barr knows it.

Lt. General Michael Flynn was the first of their targets for good reason and was set-up by the FBI, by Obama, Sally Yates, Andrew McCabe, Peter Strzok and others.  He never lied to anyone, including VP Pence who I believe was instrumental in working with the FBI to eliminate General Flynn.  Fear of Mike Flynn was of top concern.  He is an expert on China, Iran, Islam and our intelligence community and had to be dispatched. Many were involved in eliminating this brilliant veteran from helping our President.  He should be freed of this horror his family has lived through for over two years.  Please help defray the millions in legal debts by donating to whatever you can to https://mikeflynndefensefund.org/.

Paul Manafort was investigated by the DOJ in 2014 and they found his conduct not prosecutable.  But the resurrection of the evidence by Mueller’s team has destroyed him because of his four-month position as campaign manager with candidate Trump.  He spent nine months in solitary confinement because of democrat appointed judges when apparently multiple murderers, Charles Manson and Richard Speck, weren’t even put in solitary confinement.

Investigators accused Manafort of lying in court despite the fact that he denied candidate Trump’s prior knowledge of the June 9th, 2016 meeting he attended with Kushner and Donald Trump Jr. with a Russian lawyer, Natalia Veselnitskaya.

The same goes for Jerome Corsi and Roger Stone who have been pressured to sign a plea deal falsely attesting to being conduits to Julian Assange.  Roger also needs help with his legal defense fund.  Both he and General Flynn have lost their homes.

The end of the special counsel’s probe shattered the Democrat’s claim of Russian conspiracy.  Of course, we all know where the real Russian conspiracy lies, but main stream media will never divulge the truth.  Americans are more interested in the economy, illegal immigration and health care than this spurious investigation of our President.  Don’t forget that the left not only hates Trump, but they hate everyone who voted for him.

And what is in this final report is as revealing as what is not in the report…there is nothing whatsoever regarding a mention of the fraudulent and manufactured Steele dossier.

The dossier, characterized by Former FBI Director James Comey under oath as “salacious and unverified,” consisted of opposition research compiled by a former British intelligence officer and commissioned by the Hillary Clinton campaign.  This piece of garbage was created by Hillary Clinton and the DNC; and Hillary’s campaign manager was pushing the fake Russia story at the DNC convention the very same day the FBI launched the Trump/Russia investigation. Link  And yes, DNC lawyers met with the FBI on Russia allegations before the surveillance warrant. 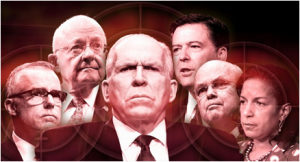 Comey was the catalyst that started this when he showed the Steel dossier to the President and then leaked it to the press.  When James Comey was questioned by Congress, he answered, “I don’t know,” “I don’t recall,” and “I don’t remember” 236 times while under oath. But he remembered enough to write a book where he comes off as sanctimonious despite Amazon’s five-star promotion.

James Comey claimed that the Mueller report was deficient.  However, Comey’s statement on Hillary Clinton’s unauthorized home email server that allowed the Chinese to intercept Clinton’s server and classified documents in real time was more than deficient!

The FBI has admitted that those illicit emails from Clinton’s server were also found in the Obama White House.  Yes, Obama knew!  E.W. (Bill) Priestap, assistant director of the FBI Counterintelligence Division, made the disclosure to Judicial Watch as part of court-ordered discovery into the Clinton email issue.

Where Were Whistle Blowers

VP Pence says that he was deeply offended by Strzok and Page for their talk of infiltrating his transition team.  I don’t hear him being deeply offended by what has happened to the President, to General Flynn, to Paul Manafort, to Roger Stone, to Papadopoulos, or to Jerome Corsi.  This “shadow president” wants more than anything to be the leader of the free world.  Surely the Koch brothers and Dick and Betsy DeVos will fund his campaign for President, just as they’ve funded him from the beginning of his political days.

Our new former Bush attorney general is being excoriated for standing by the President, when in fact, he seems to be standing by the law.  Do I trust this long-time friend of Robert Mueller?  Not yet.  I want to wait and see what he does legally.  So far, he’s been honorable, but I cannot give him credence as a man who would stand by the “rule of law” until the perpetrators of this conspiracy are brought to justice and until those who committed crimes are indicted.

The leftists are accusing AG Barr of a “coverup” and “exoneration,” but the real coverups lie with all of them and Obama’s DOJ, not to mention Robert Mueller who never investigated the dossier pack of lies.  He obviously had no interest in the coup perpetrated by the very FBI which he led from 2001-2013…the last two years under Obama who kept him past the 10-year term via Congressional approval.

Mueller avoided opening the true can of worms…the Steele dossier, and actually covered for his FBI.  He even kept Strzok on his investigation payroll for six months after the Strzok/Page emails became known.  As Kimberley Strassel said in a recent Fox interview, Mueller was to investigate Russian interference in the election, but he never looked at the fact that the fake dossier may have been disinformation from the Russian government.

Strassel asks in her WSJ article, “How did Mr. Mueller spend two years investigating every aspect of Russian interference, cyber hacking, social media trolling, meetings with Trump officials, and not consider the possibility that the dossier was part of the Russian interference effort?”

Todd Starnes reports that many advanced placement students across the fruited plain will be using an American history textbook that depicts President Trump as mentally ill and his supporters as racists. The textbook, published by British owned Pearson Education, is titled, “By the People: A History of the United States.” It was first exposed by radio host Alex Clark in 2018.  Pearson promotes common core testing and corporate school-to-work education.

And all of this was brought to us by the Democratic Party’s nominee, Hillary Clinton, who stole the nomination from commie Bernie, stole debate questions, had the FBI bury evidence against her, financed a fake dossier, weaponized the FBI by spying on her opponent, outspent her opponent, and still lost to a man she called incompetent.

Why isn’t she in prison?