Corey Johnson, a Florida teenager allegedly enamored with ISIS, the Oklahoma City Bomber, and white supremacist groups, is in police custody after cutting the throat of a 13-year-old boy during a rampage at a birthday sleepover.

Interim Palm Beach Gardens Police Chief Clint Shannon alleged during a news conference and press statement describing the bizarre sequence of events: “Our understanding is he had converted to Islam and had been watching violent videos online.” He had been on the FBI and Jupiter police radar screen since at least 2017 and was allegedly about to be arrested for a threat to a foreign school.

According to Chief Shannon:

In a story appearing locally in Florida on Saturday, it was reported.

A self-proclaimed ISIS sympathizer accused of stabbing three people, one fatally, in Palm Beach Gardens, Florida was already being investigated by the FBI and local police before his attack. According to the American Military News, the FBI was in the process of “discussing pending federal criminal charges” against him one week before the stabbing. 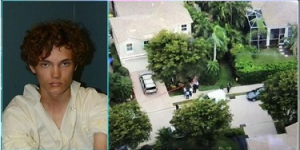 Corey Johnson, 17, was arrested Monday, March 11, for the multiple stabbings of three people during what was supposed to be an innocent birthday party sleepover. The self-described Islamic terrorist killed 13-year-old Jovanni Sierra and seriously wounded Elaine Simon, 43, and her 13-year-old son, Dane Bancroft.

According the AMN report, Johnson proudly proclaimed it was his Islamic faith that had inspired his bloody attack. He also claimed that he read verses from Islam’s holy book The Koran before he arrived at the home hosting the sleepover.

The suspect, Johnson, boasted of his knowledge of Muslim dogma that helped “to give him courage to carry out his intentions.”

“As if this killing weren’t bad enough, it comes at a time in Florida in which there was a high school shooting-spree leaving more than a dozen children and adults dead, and on Saturday a tragic and deadly bridge collapse on the campus of Florida International University in Miami. The three incidents occurred within days of one another,” said Det. 1st Grade Linda Travis-Bixby, a homicide and forensic science expert.

“What I find most troubling,” said Det. Bixby, “Johnson’s radical Islam beliefs coupled with his propensity for violence were known to school security, police and even the FBI. Also, it strikes me as odd that his incident never received 10 percent of the bridge and school rampage cases covered by the national media.”

However, one national source, Fox News,  did report that Jupiter Police, Palm Beach County School District police and the FBI previously received “intelligence gathering” on Johnson that prompted an investigation into his “alleged violent tendencies.”

Palm Beach County School District Police said that Johnson’s behavior was troubling as early as middle school. Johnson allegedly made anti-Semitic and anti-homosexual statements to students at school. School police officials admitted that they received information on Johnson and his “violent tendencies,” and that he also had “spoken about inappropriate places to bomb” and he “is a White Supremacist. 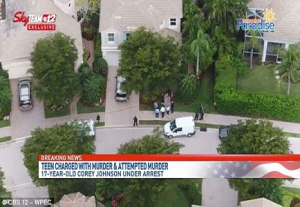 When Johnson originally grabbed the attention of law enforcement officials, they claim that officers investigated him by tracking his social media activity and movements, as well as interviewing members of his family.

“Sounds to me as if the so-called ‘premier law enforcement agency’ dropped the ball again. Perhaps President Trump will re-examine his list of ‘swamp dwellers’ that need removal from the FBI, ATF, DEA and other crimefighting agencies,” advised former police chief and director of security Joseph “G.I. Joe” Bovanna. “What we need are supercops to fight the terrorists, organized crime groups, illegal alien drug gangs and others. What we don’t need are Ivy League lawyers who are beholding to the radical left,” said the Marine veteran Bovanna. [Link]