The Feminization Of American Boy Scouts

My memories of the Boy Scouts still remain vividly even though I’m 90 years old. Boy Scouts had a moto and an oath. The moto is: BE PRAPARED. Be prepared in mind by having disciplined yourself to be obedient to every order, and also by having thought out beforehand any accident or situation that might occur, so that you know the right thing to do at the right moment and willing to do it.

THE OATH IS: On my honor, I will do my best. To do my duty to God and my country and to obey the Scout Law: To help other people at all times. The goal is to keep myself physically strong, mentally awake and morally straight. (Nov. 28, 1917)

So what is wrong about moto and oath? Not a damn thing and I want to keep it that way. It’s not so easy when out in the wilderness where there lurks a specter composed of enemies so powerful that the face and purpose of my country is rapidly being converted to the New World Order where God, religion, unborn babies are legally aborted and morality is no longer recognized as a sin. The political script of taking over a country was Valdemar Lenin’s. The formula is to provide handouts to the proletariats to make them dependent and train children from infancy that the state is god and communism is the only solution where the country collapses economically and politically to a level of the third world.

The Boy Scouts are not girls as one with any brain would conclude. Girls are built different, thi nk different and definitely affect boys once they enter their realm where boys strive to be men of character and of purpose to fulfill their moto and oath as destiny. What then is the purpose of the new leaders of Boy Scouts of America? Their purpose is to attack the citadel of what men are supposed to be of high and noble character and morality to be men, as achievers, as leaders a species apart of what they appear to be today. The present board that reformes the Boy Scouts have the same goals as Leninists to destroy convention; to disrupt society at every level, toinoculate with poisonous venom a population of robots that are only loyal to government by edict.

Once a female is in their midst, the rough and tumble of the male species becomes modified, the goals are bent to accommodate females, the same as those in the military where environments bend to meet different standards. It’s no secret that naval aircraft carriers having 5,000 mixed crew members aboard ship, living for months on end in confined living accommodations result in large numbers of pregnancies every time the carriers go out to sea. The cost is enormous; positions must be replaced, medical care requires extended leave; loss of trained technicians to civilian life is more wasted money that could be spent to rebuild our forces. This travesty is repeated over and over again. On our submarines, special quarters for females increase operational costs and increase tensions unless the women on board have the same type of traits that males must to withstand what is really a cluster phobic type environment. Recruiting for submarine duty requires personality traits where one can get along with others under the most strained conditions. There is only a small minority who has that special kind of psychological mentality.

In the Army those females who volunteer for combat positions experience bone breakage during training far in excess of males.

It doesn’t take much of an imagination to conclude that in the Boy Scouts, once the door is wide opened, the trans-gender homophobes and all the rest of the products of abnormal deviates enter the once sacred sanctuary where men are really men. One can now envision lace sewn on men’s shorts beneath skirts as acceptable and normal.

The fundamental plan of control blossomed as far back in the United States as the Reconstruction period when the Democratic Party used its muscle enforcers, the Klu Klux Klan, to keep blacks on the plantations. Those who rebelled were strung up on trees. Today, green card aliens vote illegally along with legal citizens who are black, but all party members must vote the party position in the primaries when their members have more voting while the general population mostly ignore voting in the primaries.. The reason for this establishes a numeric plurality which favors their party. They are however, able to vote in the general elections where their majority of voters already outnumber their opponents on the right.

Any member who violates the primary restriction are declared disloyal to the Party and selectively single out through illicit government manipulation rules to prohibit grants and welfare supplemental income or general welfare payments such is the power of the left who illegally discard the Constitution and bypass opposition by simply ignoring it. The Obama Administration ignored laws and implemented rules of his own choosing to punish whoever doesn’t fit the plan. The neocons within the Republican Party are really posing in mufti. They work to use the left to meet globalist goals.

But the Democrat Party, the Party whose center is the Communist Party, is not the only participant in the attack of our Democratic Republic. The Wilson Administration revealed an awakening call. Woodrow, in the last days of his administration, expressed guilt and a confession when he admitted that “I have betrayed my country.” He said that there is a power so great of which I dare not speak. He obviously meant that there is a power so great that he is afraid to speak about it without consequences including assassination. What Wilson didn’t identify, but fully understood, was the massive influence of the banking industry whose political purpose is to control the world’s currencies through the means of one world government.

One of the first power brokers of the banking establishments was Averell Harriman’s main Wall Street connection for German companies and the varied U.S financial interests of Fritz Thyseen who was a financial banker of the Nazi Party until 1942. The Trading With the Enemy Act (enacted on October 1917 classified any business transactions for profit with the enemy nations as illegal and any funds or assets involved were subject to seizure by the U.S government. The declaration of war on the U.S by Hitler led to the U.S. government order on October 20, 1942 to seize German interests in the U.S. which included Harriman business interests under the act.

Throughout the 1930s, Prescott Bush, father of George Herbert Walker Bush, was president of Harriman’s bank in Germany and up to the implementation of the Trading Act; Prescott provided support for the Nazi as well as the communist government under Stalin’s brutal control. Avril Harriman was first to fund and provide the financially weak Soviet Government with a cement factory. This probably was a reason that throughout the 30’s, even before his appointment as the U.S Ambassador to the Soviet Union, he had unlimited access through the iron gate of the Soviet Union. 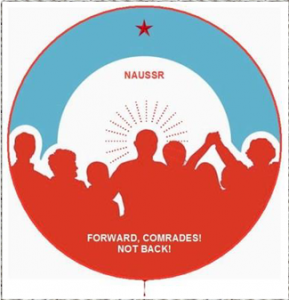 The assets confiscated by the U.S. government for the duration of the war, were never used to help pay for the war. They were returned afterward: UBC was dissolved in 1951. Thus is the example of power of U.S. major banking interests within our country.

We who love our country face a toxic world of deceit. It is not only Communism, but a select group of multi billionaires who attend the Devos meetings in Switzerland. Their enormous wealth provides the money supply to a multiplicity of America’s enemies within. Their goal is to incorporate as many countries as possible in the New World Order whereby they will have the ability to control currencies using the power structure of the Hague of unelected judges that make a mockery of nationhood.

“Forward, Comrades! Not Back!”

America and the World on the Brink of Global Communism

1. From ‘Hope & Change’ to ‘Forward!’ –
2. ‘Forward!’: A Hardcore Communist Maxim with a Long History –
3. Obama & Friends Seem to Get Ready for a Revolutionary Breakthrough –
4. The Deeper Reality of Communism: Pitch-Black Satanism! –
5. The Dire Warnings from Communist Defectors 30 Years Ago –
6. Mikhail Gorbachev’s Shocking Blackmail Speech of Dec. 10, 2011 –
7. Skip-back to 1987: Gorbachev’s Propaganda Book, ‘Perestroika’, Had It All Revealed Already! –
8. Some Final Thoughts, prior to and after the 2012 US Presidential Election –