“Life is a fight, a fight to stay alive and a fight to keep others from taking your life or your liberty from you!” — Ron Ewart

Many of our readers are aware of our difficulties with the IRS and the articles we have written describing those difficulties, along with just how corrupt the IRS has become.  We will cover more on that issue, later in the article.  Hopefully, President Trump’s Tax Cut and Reform Act of 2017 will cut the IRS off at the knees, or at least slow it down.  We’ll see. 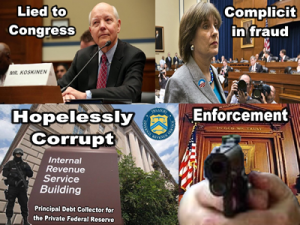 shall be uniform throughout the United States.”  (Article I, Section 8, Clause 1 of the U. S. Constitution.)

But alas, the taxes collected in accordance with the Constitution were not enough and the bankers that loaned vast sums of money to the United States government, were uneasy about their investments.  Congress, pressured by the bankers, capitulated to their lobby and the 16th Amendment was born in 1913 that created the Federal Reserve and the Internal Revenue Service under a progressive tax rate system, where higher earners pay a significantly higher tax rate, a direct violation of the equal protection clause of the U. S. Constitution.

We are told that the Federal Reserve was created to smooth out the peaks and valleys of our economic system, as prior to the 16th Amendment bank runs and failures were common.  Perhaps there may be an element of truth to this argument.  However, the real reason for the 16th Amendment was that the bankers needed a steady, determinable source of re-payment to secure their loans and what better way to do it than to tax the income of all Americans and to create an agency that puts the fear of God into those Americans to insure compliance of a so-called voluntary law, even if it violated the Constitution.  This could be called, “security for a loan at the point of a gun where the government holds the gun and your head is where it is pointed.”    That is how the Cosa Nostra does it.   Pay up, or we’ll break your leg.

Since 1913, the government and the IRS have grown exponentially in both enforcement power and manpower.  They have become arbitrary, capricious, arrogant and hopelessly corrupt.  Americans no longer are the master but have reversed the role with government and have become the servant.  To give you a rough idea of government growth, take a look at the following statistics in just the last twenty years.

In 2016, the IRS raised $3.333 Trillion in taxes, spending $11.7 Billion, using 78,000 employees.  The taxes raised in that year equaled $10,288 for every man, woman and child in America.  In contrast, in 1987, (just 20 years before) the taxes raised per person was $3,627, on total taxes of approximately $886.3 Billion.  In just 20 years, taxes to run the government, collected by the IRS, have increased 376 percent.  Taxes per capita have increased 284%.  (Source: IRS)  In the same period the Gross Domestic Product only increased by 100 percent.  Even allowing for inflation, the questions raised by these statistics are numerous.  There can be no doubt.  Government is exploding and the “tax man cometh.”  (This massive increase in spending, in just 20 years, can be laid directly at the feet of the Democrat Party and the financially flawed Progressive ideology that uses the Public Treasury to buy votes to maintain political power.)

To collect all this “dough” from the duped American taxpayers, the IRS just had to get more aggressive.  But the IRS has now gone beyond aggressive and has become arbitrary, capricious, arrogant and corrupt.

The operations of the IRS have spawned thousands of books, essays and articles on just how bad it is and has caused probably hundreds of thousand of court cases since 1913 that have landed thousands of taxpayers in jail and many more unnecessarily paying billions in fines and penalties.  The IRS makes mistakes all the time.  It has been estimated that the IRS sends demand notices, liens and taxes-due errors to at least 10,000,000 taxpayers every single year.

Many books have been written describing why individual Americans don’t owe taxes, in a strict interpretation of the Internal Revenue Code.  If you read their arguments you would tend to believe they are right.  One such author, Pete Hendrickson, wrote a book called “Cracking the Code.”  His method, described in his book, shows how to get back all the money you paid to the IRS.   Apparently, using that method, many so-called non-taxpayers (as Pete calls them) have gotten their money back.  However, Pete’s wife spent 18 months in jail for daring to challenge the IRS.  The story is much more complicated than that, which we won’t go into here, except to say in this case, the IRS used judicial brute force to throw an innocent lady in jail, probably seeking revenge against her husband.

However, many other authors who have told Americans they don’t owe taxes under the code have landed in jail as well.  One Irwin Schiff died in jail for daring to challenge the legality of the tax code as applied to individuals.   Some get away with these legal challenges, others do not.

On the other hand, we have never taken that tack.   It is too dangerous because the IRS is fickle.  It will prosecute some folks, but ignore, or let others go.  The IRS is all-powerful.  Why take the chance?  But that doesn’t mean you shouldn’t challenge them, especially when they are wrong and they are wrong all the time.  We have challenged the IRS numerous times on their errors and have prevailed, except for the following event.

Back in 2013, the IRS started seizing 15% of our Social Security (SS) benefits for an alleged penalty from Calendar-Year 2011.  We challenged the penalty three days after receiving the Notice of the penalty with an Affidavit and followed up with a Notice of Default and Dishonor 30 days later.  We had been successful against the IRS using this method, at least five times before.  In the past, the IRS never responded to our Affidavits, they just issued a NO TAX DUE notice.

But this time, since the C/Y 2011 penalty was significant, the IRS decided to ignore our Affidavit and began seizing the SS benefits.  Before we could again challenge the seizure, we had to wait until the seizure was done.  That took over two and half years.   After the two and one half years past and the total penalty paid, we were required to file a Claim for Refund with the Secretary of the Treasury if we wanted our money back.  We filed one Claim for Refund with the Secretary and then filed a follow-up Claim for Refund two months later.  We never heard from the Secretary of the Treasury about our Claim.  Nevertheless, we still had to wait another six months after filing the claim before we could file suit in U. S. District Court against the IRS to obtain a refund.  These purposely imposed and excessive wait times are designed to inhibit any challenges to the IRS.

So in mid December of 2017, we filed our lawsuit with the U. S. District Court.  A little over a month later we received notice from the court that they were denying the issuance of the summons and dismissed our claim because the court said; “we failed to state a claim for which relief can be granted.”  This is the great cop out by Courts to weed out lawsuits, especially from pro se litigants.

The court either ignored or refused to look at the secondary issue in these cases and denied our argument.  But we weren’t going to lie down and play dead for the court in docile submission.  We filed a Motion in Rebuttal to their denial and dismissal.  You can read our Motion in Rebuttal HERE.  You will find the Motion both educational as well as entertaining.

Now our Motion in Rebuttal probably won’t get the Court to change its mind, but we had a field day in telling the court what they could do with their order.  Upon learning that the specific judge and the Clerk of the Court were negligent in filing the proper paperwork to establish their authority in the past, in the Motion we questioned the judge’s authority and requested, under an FOIA request, that he send us a certified copy of his Oath of Office and Appointment Affidavit, required for every judge.  Sure, we are tickling the tiger’s tail, but we get some perverse pleasure from it.

The point we would like to make here is that if people won’t challenge the government, whether it be the IRS or a whole laundry list of alphabet soup federal, state, or local agencies, the people can expect to be used and abused by government.  If you challenge government when they are wrong and you win, you will feel emboldened to challenge them again.  You will feel like you are in control and you are not a slave or a subject of government.  In fact, you may even feel like you are sovereign.  If more people did this, there would be a lot less using and abusing of the people by government.  Sadly, most people would rather capitulate to government than take on Goliath.  There aren’t too many “Davids” in the general population.  But then there never were.

In contrast to the non “Davids”, we are fighters.  As advocates for rural landowners the National Association of Rural Landowners has been fighting government for over 12 year on behalf of American rural landowners, providing advice, tools and other services.  Individually, we have been fighting the government (especially the IRS) whenever they raise their ugly heads and we have been showing others how to do it.  If you don’t fight, you can expect to be run over.  If you like being run over by government, that is your burden to bear.

Most everyone knows that the government, especially the IRS, has become arbitrary, capricious, arrogant and corrupt.  With new revelations coming out every day about FBI and DOJ agents FIXING the Hillary Clinton investigation, the corruption grows ever more apparent.  It will only get worse ….. IF WE DO NOTHING.

“Without knowledge, experience and a broad point of reference you cannot know the truth, much less be aware of reality, nor will you have the skill set to defend against your enemies.”  — Ron Ewart