History fails to record a single precedent in which nations subject to moral decay have not passed into political and economic decline.  There has been either a spiritual awakening to overcome the moral lapse, or a progressive deterioration leading to ultimate national disaster.  —General Douglas MacArthur

Humanism is not new.  It is, in fact, man’s second oldest faith.  Its promise was whispered in the first days of the Creation under the Tree of the Knowledge of Good and Evil: “Ye shall be as gods.”  —Whittaker Chambers

The billionaire Koch brothers are purveyors of Dark Money to politicians and entities they wish to influence in causes true constitutional conservatives would find appalling.  Here is a list of 2016 candidates who received Koch funding.  Some are influenced, some are not.

Just who are the Koch brothers and where is their Dark Money most persuasive? You will be surprised, but first let’s take a closer look at their beliefs and organizations, the latter of which cannot be covered in one article. 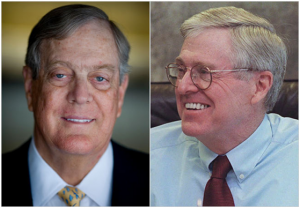 The Koch brothers (pronounced “Coke”) David and Charles – are the billionaire co-owners of privately held Koch Industries. As two of the richest people in the world, they are key funders of the moderate Republican infrastructure.

Koch Industries, Americans for Prosperity, and the Koch family foundations have been longtime members and financiers of American Legislative Exchange Council (ALEC). The Koch brothers strongly support ALEC’s promotion of a new Constitutional Convention.  The State Policy Networks (SPN) which are mini-Heritage Foundations in each state are also top beneficiaries of Koch funds. SPN and its member think tanks are major drivers of the ALEC-backed corporate agenda in state houses nationwide, with deep ties to the Koch brothers and the national right-wing network of funders.

Many Koch funding vehicles are set up as nonprofit trusts rather than not-for-profit corporations, an unusual step that reduces their public reporting requirements.

The Koch brothers’ affiliations are with the Deep State and Dark Money, and their disdain for our President is only too obvious despite several of their adherents being in the Trump administration. Charles Koch once likened the contest between Donald Trump and Hillary Clinton to being asked to choose cancer or a heart attack.

David Koch is on the board of Trustees of Rockefeller University. Phyllis Schlafly called the Rockefellers and their ilk the kingmakers.  “Highly placed New York kingmakers,” she wrote, “work toward ‘convergence’ between the Republican and Democratic parties so as to preserve their America Last foreign policy. . .” And haven’t we seen this today with those who fought Phyllis’s endorsement and the election of President Trump.

Koch is also on the board of Earth watch Institute, an environmental, sustainability, Agenda 21 group and the board of the globalist new age Aspen Institute formerly headed by now deceased new age environmentalist Maurice Strong.  Strong, Club of Rome member, devout Bahai, founder and first Secretary General of United Nations Environmental Programme (UNEP), was the driving force behind the birth and imposition of UN Agenda 21, now UN Agenda 2030.

Stem-cell research is supported by the Kochs and David also signed onto an amicus brief for the supreme court supporting gay rights and gay marriage.  Running as the Libertarian Party vice presidential candidate in 1980, David Koch backed a platform calling for the full legalization of abortion.

The billionaire Koch brothers latest ad campaign for amnesty shows they are open border, mass immigration, and mass amnesty for illegal aliens, despite opposition from the American people.  The ad pushes amnesty by using the words of the Washington, D.C. political establishment, which is unified not only on mass immigration, but also on endless free trade, and foreign interventionism.  House Speaker Paul Ryan is with them. Koch money even supported Andrew Cuomo as Governor of New York, who has publicly stated, “America has never been great.”

A campaign launched by Freedom Partners, Chamber of Commerce, Americans for Prosperity and the LIBRE Initiative, all groups funded by Charles and David Koch, will consist of advertisements, lobbying efforts and grassroots organization. This is a multi-year, multi-million-dollar campaign to tout free trade and oppose tariffs, and to once again defy our President’s goals.

The Claude R. Lambe Charitable Foundation (CRLF) is one of three Koch family Foundations; this one was controlled by Charles Koch. He created the foundation in Wichita in the early 1980s with funds from the estate of his friend Claude Lambe. For the past three decades, CRLF has often spent millions annually to provide a regular infusion of cash for groups pushing the agenda favored by Koch. This includes millions of dollars, cumulatively, provided to the American Legislative Exchange Council (ALEC), the Heritage Foundation, the Federalist Society and some state-based think tanks operating under the State Policy Network (SPN) banner.

The Claude R. Lambe Foundation (CRLF) was dissolved in 2013, further limiting what little is publicly known of which groups receive money controlled or directed by Charles Koch.

The Searle Freedom Trust, was founded by David Searle, who made millions from aspartame marketed as NutraSweet. They are major funders of the neo-con rightwing which includes ALEC, the Goldwater Institute, the Heritage State Policy Network, and 64 state-based think tanks that produce academic reports, talking points and more to advance ALEC’s agenda, and their promotion of a Constitutional Convention.

The National Journal also reported in September 2013 that David Koch himself had provided an $850,000 personal check to the Americans for Prosperity Foundation in 2003.  David Koch provided the Massachusetts SPN think tank Pioneer Institute, with a $125,000 personal check in 2007. Both of these documents were public, although unexpectedly so. Link  Pioneer is heavily tied to Willard Mitt Romney.

In recent years, the Heritage Foundation has also received funding from Donors Trust and Donors Capital Fund, including $53,300 in 2010 and $69,850 in 2012. The Koch brothers have donated millions of dollars to Donors Trust through the Knowledge and Progress Fund, and possibly other vehicles.   Donors Trust, like all donor-advised funds, can offer privacy to clients who do not wish to make their donations public.

Searle Freedom Trust contributed $3,636,000 to Donors Trust and Donors Capital Fund between 2009 and 2013.  The Center for Public Integrity exposes a number of Donors Trust funders, many of whom have ties to the Koch brothers. One of the most prominent funders is the Knowledge and Progress Fund, a Charles Koch-run organization and one of the group’s largest known contributors, having donated nearly $9 million from 2005 to 2012. Other contributors known to have donated at least $1 million to Donors Trust include the Richard and Helen DeVos Foundation, Donald & Paula Smith Family Foundation, Searle Freedom Trust, Lynde and Harry Bradley Foundation, and the John M. Olin Foundation.

Since its inception in 1999, Donors Trust has been used by conservative foundations and individuals to discretely funnel nearly $400 million to like-minded think tanks and media outlets, especially ALEC and the SPNs.

Donors Trust is considered a “donor-advised fund,” which means that it divides its funds into separate accounts for individual donors, who then recommend disbursements from the accounts to different non-profits. Funds like Donors Trust are not uncommon in the non-profit sector, but they do cloak the identity of the original donors because the funds are typically distributed in the name of Donors Trust rather than the original donors. Very little was known about Donors Trust until late 2012 and early 2013, when the Guardian and others published extensive reports on what leftist magazine Mother Jones called “the Dark-Money ATM of the conservative movement.”

Americans for Prosperity, an organization founded and funded by the Koch brothers, received nearly $9.5 million from Donors Trust and Donors Capital Fund from 2010 to 2012. Link

According to the organization’s tax documents, in 2011, Donors Trust contributed a total of $86 million to conservative organizations.

Many recipients had ties to the State Policy Network (SPN), a wide collection of conservative state-based think tanks and media organizations that focus on shaping public policy and opinion. In 2013, the Center for Media and Democracy released a special report on SPN.

Rich States, Poor States: ALEC-Laffer State Economic Competitiveness Index is an annual economic competitiveness study authored by economist Dr. Arthur Laffer, Stephen Moore, chief economist at the Heritage Foundation, and Jonathan Williams, Director of the Tax and Fiscal Policy Task Force at the American Legislative Exchange Council. Until recently, little information was available about the funders of Rich States, Poor States, but tucked in a cache of ALEC internal documents obtained by the Guardian in December, 2013, was a spreadsheet (PDF pg. 40) that showed for the first time that Rich States, Poor States is funded by the Koch’s Claude Lambe Foundation, as well as the Searle Freedom Trust.

Kochs dark money spending is not to Make America Great Again, but aims to destroy our 1787 Constitution. The two key founding documents in American history are the Declaration of Independence and the Constitution. The first explains why we exist as a nation. Not only does the Declaration mention God four times, most importantly, it says that our rights come from the Creator.

The Koch brothers masquerade as conservatives while financing the destruction of America, our Constitution and our duly elected president. This article has simply skimmed the surface of the Koch brothers financial influence. There’s more to come.

P.S. Journalists at NewsWithViews spend hours researching and writing articles to keep us abreast of the truth in politics, religion, education, health and more.  It is an offering to help save our beloved country.  Our CEO works tirelessly to bring new articles daily into hundreds of thousands of homes.  Websites are a costly venture and the left would love to see us fail, but our avid readers have kept us in the black.  Tell your friends to sign up to receive the daily articles.  Monthly donations are especially appreciated, but every penny helps us.  Donations can be made here.