Home/November 2020, Opinions/The Lies of the Left-Wing Media in Georgia Face-Off

The Lies of the Left-Wing Media in Georgia Face-Off

The uncensored leftist media is so naked in their lies and tactics. This week I was used for click bait in a smear campaign designed to hurt Republican chances of winning the two Georgia US Senate run-off that takes place on January 5th and will decide who controls the US Senate.

The Daily Beast Reports that a group with TIES to Roger Stone has posted this PHONY WEBSITE which advocates voters write -in Donald Trump – a website designed to siphon votes from Senator Kelly Loeffler and Senator David Purdue in the vital upcoming runoff elections is the tell. It’s a fraud! The group “The Committee for American Sovereignty” which I worked with in 2016 is moribund with no activities since 2016. They deny the website bearing their name is theirs. It’s a set up. A smear based on my, shall we say, broad notoriety.

A Statement from Committee for American Sovereignty Lawyer Paul Jensen to the Daily Beast: 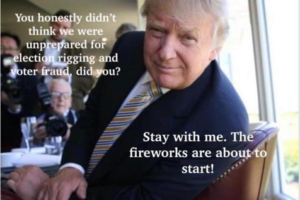 The Left is so DISHONEST.  Even after they know that the Committee for American Sovereignty did not post the crude website urging Trump supporters to write Donald Trump’s name in in the Georgia US Senate runoff January 5thto retract their claim in their HEADLINE or lead and bury the denial and mock the clear evidence of the motives or origin of the site as being to benefit to the Democrats when it’s so obvious as some kind of conspiracy theory and a little research shows that the domain is owned by someone in Canada. The Daily Beast has no proof the Committee for American Sovereignty posted this bogus site because they didn’t!

No one I am associated with and no one I know posted this website attributed falsely to be “tied to me.” I know nothing of this site! But my name draws click on the World-Wide Net with this crap.

Facts be damned, SALON now doubles down and reports the same LIE as the Daily Beast.

The extreme language and open bigotry of the homepage of this “dirty tricks” website designed to siphon votes from Senator Kelly Loeffler and Senator David Purdue in the vital upcoming runoff elections is the tell. It’s a fraud! A Democrat DIRTY TRICK. It stinks.

There is no benefit to ANY conservative or Republican here.

Here is the Daily Beast story revised since the Committee for Sovereignty’s lawyer contacted them to tell them their story was inaccurate after the publication of a Gateway pundit story pointing out some of these facts but retracting NOTHING.

The Daily Beast’s claim that they contacted me for comment and I did not respond is False!

It’s not only voter suppression. It’s a dirty trick and they’re using my name is click bait while completely misrepresenting my strong public support for both Republican candidates for the Senate in Georgia.

Here is the SALON story. Salon also made no attempt to call me for comment.

Can CNN be far behind?