The Midterm Elections: What Is At Stake?

Mid-term elections are just around the corner. Once again, politicians are doing all they can to get our votes. As always, the Democrats promise their base everything and more.

Polls show that many Americans are very happy with the President’s economy and where the country is headed. That is good news.  The poll also contained additional good news for Republicans heading into the November midterm elections: Seven out of 10 GOP voters told CBS that they prefer a candidate that the president supports.

Again, this is America where the voter is king. And when one is king, he needs to be a wise king. Sadly, the Democrats have been far too busy sabotaging every achievement President Trump has made. Their actions are unprecedented in the history of our republic. It is as though they purposely work with our enemies just to oust Trump from office.

This upcoming November election has become the most important midterm election in our history. Faced with many ruthless enemies on all sides bent on our destruction, we either stand and fight or cut and run hoping that the enemy will not pursue us to our graves. Once again it is decision time. We would do well to recognize that short-sighted people with short memories are prone to make terrible choices, even when they have the best of intentions.

So, let us refresh the voters’ memories to help them in making wise decisions. The vote you cast will 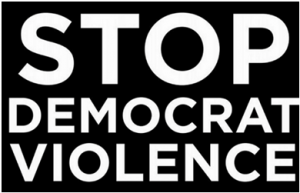 not simply replace one politician with another. At this point in time, every vote has great existential implications. Like a wounded snake, the left is desperate and is willing to do anything to disrupt our democratic process in order to grab power. They are no longer the party of Kennedy. That Democrat Party is dead.  The left has become so disoriented that they are now calling 63 million Trump voters “Nazis” and extremists. But why?

Whether we like it or not, we are truly in a war of survival of this great nation. The situation has become so dire that we no longer can negotiate co-existence—live and let live—with the left.  There is no argument or discussion with the insane.

It is always more prudent to go with the facts than fiction. Democrats are now clearly revealing exactly who and what they really are. They are no longer hiding behind facile words and mischaracterizations.

Free people must decide their priorities with foresight and wisdom and shy away from shortsighted simplistic solutions. It is by far more prudent to face the implacable Democrats on the march now than to cut and run. There is no safe place to run. The Left is calling Trump voters “Nazis” and we’re the extremists? With all the madness, we are witnessing from the left, rest assured, it will result in their own demise. Stay positive, remember our best weapon is the voting booth. They couldn’t stop Trump and they won’t stop patriotic Americans!

A New ad recently released by the Republican National Committee is attacking the left by claiming that liberals have become “unhinged.” Yes, the left has become unhinged. And in the process, they’ve proven how crude, crass, classless, and deprived of values they really are.

Democrats are confused as how to get their power back, caught between catering to a base that is seething with anger toward President Donald Trump and appealing to voters in Republican-leaning parts of the country who they’ll need to win control of Congress.

Historically, in every midterm election since the Civil War, the president’s party has lost, on average, 32 seats in the House and two in the Senate.

However, Republican voters are typically more reliable and more loyal than Democrats in non-presidential elections, making it less likely to see the kind of downfall Barack Obama experienced during his two midterm elections in 2010, when his party lost the majority in the House, and in 2014, when they lost the Senate.

Many American are eager to know who the next generation of leaders in the Democratic Party will be? Pelosi and Schumer? Elizabeth Warren? Bernie Sanders? I don’t see a farm team over there that would make any Republican operative pessimistic about the GOP’s chances moving forward and winning both the midterm elections and the 2020 Presidential election.

Well, you can’t beat something with nothing. Democrats ineptness and refusal to look inward at their own shortcomings, have no choice but to accept the popularity of President Trump and his victory in November and beyond.

In this election, we must be serious, our highest priority is the preservation of this nation of the free. We have done what it took in the past and we must do what it takes now and, in the future, to safeguard liberty.

Defeating Democrats is only the first phase of many.  The encroaching Islamism in this generation is America’s greatest challenge. We must meet the threat and defeat it. The alternative is to suffer the fate of Europeans, many of whom are voting with their feet: fleeing to other lands and abandoning their ancestral homes to Islamists.

Don’t be fooled by the accusations leveled at this country by the incurably sick leftists at home and America’s ill-wishers abroad.  America is not perfect. Yet, it is the very best hope for a humanity struggling to find its humanness. America is worth defending.

Vote for the candidate who is not going to cut and run in the face of radical Democrats or Islamic jihadists.