The accusations, innuendos and falsities against Donald Trump regarding Russian ties began over a year ago during the 2016 campaign. The narrative that anyone who challenged Hillary Clinton was a Russian agent exploded when the Democrats in collusion with the corporate media started the insane accusations that anyone who defended Donald Trump was affiliated with the Russians.  Bernie Sanders was even accused of having dark connections with the Russians because of his honeymoon in the Soviet Union. Rep. Adam Schiff, on the Tucker Carlson Show, accused him of being a Russian agent because he rejected the Trump, Russian collusion as it lacked conclusive proof.

I believe, based upon all the documented evidence, the Trump-Russian facade was originated by the Democrats to conceal their history of on-going illegal Russian dealings, not only throughout the campaign, but during Hillary Clinton’s term as Secretary of State.

There is also the exposed cover-up regarding the fabricated Dossier concerning the “Pee-Pee Gate” conspiracy.  That’s when the Democratic Party, in collusion with Director Robert Comey’s FBI, jointly committed election fraud by paying a Russian agent over $15 million to manufacture a preposterous account against Donald Trump involving a hotel room that President Obama supposedly slept in. 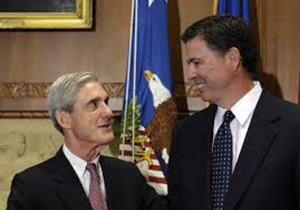 Five months after the ex-director of the FBI and Special Counsel Robert Mueller was appointed to lead an investigation against Donald Trump, he has found absolutely nothing pertaining to a Trump, Russia collusion or any other criminal or unscrupulous activity.

Mueller handpicked his Federal Grand Jury out of the DC swamp.  This group of 90% Clinton voters would indict and convict a Trump ham sandwich of too much mayonnaise and send it to prison for life, if they could.

Sometime in September, after Mueller was unable to discover any incriminating evidence pertaining to Trump, Russian involvement he altered his tactics.  He convinced the Grand Jury to compose illegal, parallel construction indictments and he used these to threaten Trump associates and friends throughout Washington DC with prison time in, exchange for exoneration if they would fabricate some kind of Russian narrative involving Trump.  We know this, because of those who came forth and exposed Mueller’s unethical tactics.

It was during this time that Mueller had interrogated Manafort, Trump’s campaign manager. He was also threatened with a Grand Jury indictment per Mueller’s request. Fortunately, Manafort is a standup guy and refused to lie against Trump.

So now, 2 months later, Mueller brings forth indictments, with an announcement that he will release them on Monday.

These are the reasons Trump accused Attorney General Jeff Sessions of being a traitor for unnecessarily and improperly recusing himself from heading this fake Trump-Russian-collusion investigation and causing it to fall into the hands of Trump-hater Mueller.

Robert Mueller was the bagman for Hillary Clinton who brokered the State Department’s treasonous sale of 20% of US uranium to the Russians with Obama sealing the deal from the White House. For brokering this deal, $200 million was transferred to the Clinton Foundation.  This we learned from Wikileaks, with the whole deal detailed in Hillary’s emails.

Every one of them expected Hillary to win the Presidential election.  Had Hillary won, none of this would have been a threat, since the heads of all the prosecuting departments; the FBI, the US Attorney General’s office and the US Court system are co-conspirators in this, or previous crimes committed by this criminal faction of the US Federal Government.  These departments were, and the majority is still run by Obama implants, which just as Obama hold no regard for justice, fairness or truth.  However, to their chagrin Trump was elected President, who’s not one of their criminal cabal and truly wants to “make America Great again”. Trump’s election reversed the direction of Washington DC and sent the corrupt elements in the Democrat and the Republican Parties scurrying for the darkness like roaches hiding from the light. Since this election, these same criminal elements have unsuccessfully tried to pin their crimes on Trump.  This is why he is hated and fear, and must be eliminated.

Uranium is the main ingredient for making bombs and thanks to Clinton, Mueller and Obama, America’s uranium is now being sold by Russia to any U.S. enemies like N Korea, Iran, or the highest bidder.

Muller’s also eyeball deep in 2 or 3 other illegal deals between the Clinton’s, Robert Comey, Loretta Lynch, Barack Obama and Eric Holder.  HSBC has been caught 3 times unloading pallets of hundred dollar bills out of Simi trucks, laundering money from the Mexican drug cartels for pennies on the dollar.  Bill Clinton had appointed Lynch as State Attorney General, Mueller was the FBI director in charge; Comey was on the board of the bank, HSBC. Lynch gives them a slap on the wrist fine and no jail time, on three different busts, and each time business continues as usual. Comey gets his cut from the profits, Mueller gets his, the Clinton Foundation get theirs, and Lynch gets hers.

Here’s the other link to this gang of criminals.  Eric Holder was the Obama’s appointed US Attorney General at the time.  He started Fast & Furious, selling guns to the Mexican cartels laundering their drug money through HSBC, so they could kill off all of their competition, making them the only dealers in Mexico.  That way, all the drug money would be channeled through HSBC banks and a bigger take down from the US Federal criminal cabal that runs our country.

Over a hundred-thousand Mexicans were murdered that year including a Border Patrol agent.  After ballistics, the gun that killed the Border Patrol agent was traced back to one of the guns from Holder’s Fast & Furious.  That was the evidence that started the investigation to the crimes above and the reason Eric Holder was forced to resign.