Persian or Iranian civilization and its culture undoubtedly has marked a significant era in the history of the world. In addition, to get a better picture of how the events ensued, we need to briefly address Persia’s history and unravel some of its perplexing names and origins, both before and after the Islamic period.

For many historians, it is difficult to imagine the survival and continuity of Persia, knowing full well the avalanche of assaults by extremely powerful and ruthless armies during its tumultuous history. Professor Robert Payne  has eloquently described this paradox:

“There are good reasons for the continuity of Persian features and Persian character. Invaders have swept over the land: Arabs, Mongols, Greeks, Turks, and Scythians. They came in floods, stayed for a little while, and then the floods subsided, leaving the original Persians unharmed.”

He continues: “The Persian Empire swallowed up the Babylonian and Assyrian Empires, and went beyond them. It was the greatest empire the world had ever known, and for two centuries its capital was the capital of the world. Today only the core of this empire remains. But the Persians, who rarely regret the past, do not believe the glory has departed. Speaking quite confidently, as though it were the most natural thing in the world, they will say: “Glory lay over this land from the beginning.” 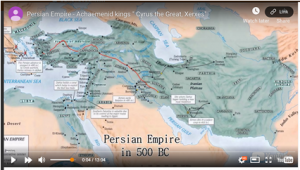 “For them Persia is far more than a country: it is a place of splendor, where the gods dwell and the ancient heroes still walk in the land, where the remote past and the immediate present live side by side. For them all other lands are disappointing, for the sun does not shine so brightly elsewhere and there are almost no buildings beyond the boundaries of Persia which shine so brightly as their blue-tiled mosques.”

According to Bernard Lewis

“Iran was indeed Islamized, but it was not Arabized. Persians remained Persians. And after an interval of silence, Iran reemerged as a separate, different and distinctive element within Islam, eventually adding a new element even to Islam itself. Culturally, politically, and most remarkable of all even religiously, the Iranian contribution to this new Islamic civilization is of immense importance. The work of Iranians can be seen in every field of cultural endeavor, including Arabic poetry, to which poets of Iranian origin composing their poems in Arabic made a very significant contribution. In a sense, Iranian Islam is a second advent of Islam itself, a new Islam sometimes referred to as Islam-i Ajam. It was this Persian Islam, rather than the original Arab Islam, that was brought to new areas and new peoples: to the Turks, first in Central Asia and then in the Middle East in the country which came to be called Turkey, and India. The Ottoman Turks brought a form of Iranian civilization to the walls of Vienna.”

During my generation, Iran was overall a modern and secular country. Islam was not an important aspect of life to most Iranians. Islam was performed for only special occasions such as burials, weddings and by a very devout Shi’a minority Muslims, during the month of Muharram, specifically, during the days of Ashura and Tasua.

Forty years has passed since the Islamic invasion of 1979. Today, many Iranians are incorrigibly disaffected from the fraudulent and oppressive Islamic rulers. Although Islam was imposed on the Iranian people some 1,400 years ago, Iranians deeply value their own ancient non-Arab identity and have never fully surrendered to Arab culture.

Today, Iranians have finally awakened and search for their roots and identity. Some people have thanked Ayatollah Khomeini for this enlightenment. For revealing true of Islam, not the figment of their imaginations about Islam. Many have already started to refer to this period as an era of Persian renaissance or awakening.

Historically, Islam has always contradicted Persian values, costumes, traditions and culture, as is evident from the glorious pre-Islamic Iranian festivities and celebrations such as Nowruz. The current anti-Islam movement in Iran in recent days has gained serious momentum, especially among the younger generations who are savvy and aware of world events via the Internet.

These brave and young enlightened Persians hold the key to break the chain of Islam that was wrapped around the necks of their forefathers many years ago with the sword of Allah. They were forced to pledge their loyalty with an oath to Allah’s book –the Qur’an– the same charter that they held in one hand while slashing the throats of tens of thousands of innocent Iranians and yelling joyously “Allah is the greatest.”

Free and civilized people must understand that it is not easy to reach the peak of freedom overnight. It takes great vision, effort and courage to ascend from the pit of Islamic slavery to the peak of emancipation.

Iran has always been a diverse empire. From the dawn of its inception to its current existence, diversity has always been its strength. They are the people who have given Iran its enduring strength and continuity throughout the ages. Those natives include Persians, Azaris, Kurds, Balochis, Turkmen, Gilakis, Mazandaranis, Lurs and more. For millennia, these Iranian patriots have all pledged their allegiance to Iran as an idea and a country that they all have shaped and contributed to its lofty culture and beauty. Iran has been a unified nation for thousands of years. I can attest that many Iranians consider themselves to be the spiritual children of Cyrus the Great and adherents to his Charter—the first Charter of Human Rights—that clearly proclaims equal rights and is worthy of the beliefs and practices of all people.

The Birth of Persia

Some 2,500 years ago, the Persian Empire ascended to power and became an Aryan (Iranian) Monarchy. Cyrus the Great (Cyrus II), an Achaemenian King founded the Persian Empire in the sixth century BCE by the unification of the two Aryan tribes, the Medes and the Persians. In that medieval era, Persia controlled an empire that stretched from Europe’s Balkan Peninsula in the West to India’s Indus Valley in the East. It was the largest empire the world has ever known to that point.

Since Arabs lacked the letter P in their Alphabet, Persian or Parsi became Farsi, an Arabized version. The word Farsi is in fact inaccurate nomenclature. Linguistic scholars recommend it not be used. But, unfortunately, Farsi has become part of the lexicon of the free world today and it is used by both Iranians as well as non-Iranians. The earlier exodus of Zoroastrian migrants who fled to India after the Arab invasion of Iran, now use the authentic name of the word ‘Parsi’ as their ethnic group name.

The current Parses or Persians who live in India are the true Persians who were forced to flee Persia in the seventh century to save their lives, culture and religion. They came to India with nothing, but now they are the wealthiest minority. They have always lived in harmony with the local host and assimilated well. They educated themselves, created wealth, supported their own community and helped others.

In contrast, Muslims, wherever they go, loot, murder, rape and plunder. They have ruled Iran for centuries, during which, they oppressed other religions with brute force. They were always in conflict with the hosts, cutting the hand that fed them! They burned the most valuable Iranian books and detested any other kind of education, barring reading of the Quran.

Many people and media assume Persia no longer exists and it is now referred to as Iran. The terms Iran and Persia are often used interchangeably to define the people from Iran. I believe Persia should continue to be used for historical purposes in order to connect Persia to its glorious antiquity. In 1935 AD, Reza Shah notified other countries to refer to Persia by its native name, Iran. However, map-makers and writers overlooked this formal request and continued to use Persia as the formal name instead of Iran. The name Iran has always been used among the natives and it was nothing new. Iran means the land of the Aryans. The name Iran has gone through evolutions as well. From Airyana or Airya or Aryans and other names and finally Iran. Even though not all Iranians are Persians, but both names Persia and Iran have become synonymous to include all the residents in Iran.

Before the Islamic invasion (Revolution) of 1979, most Iranians were uninformed as to the core values of Islamic ideology simply because they could not read Arabic. So, they created their own version in their minds. Regrettably, in the seventh century AD, the Persian Empire (Sasanian Dynasty) lost the war to the Bedouins of the Arabian Peninsula in the Battle of Qadisiyyah. Why they were defeated is a long story. For years Iranians resisted and fought back, but no avail. With that defeat, the Islamic creed was imposed on an enlightened, tolerant and free people at the point of a sword.

Zoroastrianism, the original Iranian religion, was not an effective barrier against the radical and backward religion from the Arabian desert

In 1979, the world witnessed another Arab-Islamic invasion on the peaceful nation of Persia. As we mentioned earlier, most Iranians never knew of Islam’s true nature. But after the 1979 Islamic Revolution, it opened their eyes to the Ayatollah Khomeini’s version of Islam: violence, executions, mutilations, torture, rape, harassment, forced hijab, Islamic dungeons and more. They finally tasted the real Islam.

In the past forty years, many Iranians have begun to reject Islam in its entirety with its exclusionary and oppressive dogma. We call on decent and tolerant people of the world who celebrate gender equality, race amity, and liberty for all to join us in once and for all defeating the scourge that is Islam.

Many Iranians continue to abandon the slaveholder Islam: they break loose from the yoke of the exploitive clergy, renounce Islamic dogma, purge the discriminatory and bizarre teachings in the Quran and the Hadith, and leave the suffocating tent of dogmatic Islam for the life-giving expanse of liberty.

Dr. Jason Reza Jorjani, one of the pioneers and leading intellectuals of the Iranian Renaissance movement, in his powerful presentation, sheds light in a rapidly growing movement of Persian revival.

In short: The Persian awakening has already begun. Islamdom is at a crossroad. Millions in Iran, a hugely important force of sustaining and fanning the Islamic fire, have already turned and are turning against the Islamic credo. They and the rest of the world need to hear the voices of secular decent people who are in league with them and can help to put Islam, the very spawning swamp of the deadly virus that makes for jihadists, out of business.