Skip to content
Home/January 2021, Opinions/The Problems Biden-Harris and Their Congress Won’t Solve In 2021

We elect our presidents and Congresses to fix, repair and solve our national problems.  As we enter 2021, however, we will discover that they won’t solve any of our major problems in the next 52 weeks.  Why is that?  Answer: they didn’t solve those problems in the past 52 weeks.

What problems need fixing, but won’t get fixed?

First off, we’ve been at war in Iraq and Afghanistan for 20 years at $6 trillion in spending.  We’ve accomplished nothing to secure our freedoms or ensure our safety.  Both countries remain ‘goat herder’ third world nightmares with no foundation for any kind of civil or 21st century advanced societies.  Yet, the new president and Congress will continue spending something like $4 billion every 30 days to keep those ‘forever wars’…forever.  Note that since those two wars started in 2001, 114,000 active duty and retired military veterans committed suicide.  In other words, we killed more of our own BECAUSE we allowed those wars to cause insanity in our own troops, enough so, that those kids killed themselves.   But you never hear about such an insane number of suicides by the mainstream media.  But you can count on the Military Industrial Complex boys to talk Biden and Congress into continuing those wars.

Second, we’ve been battling to secure our borders for 30 years from the Mexican, Central America and Asian invasion…well, we citizens have asked, begged, protested and marched to secure our borders from an excess of 25 million migrants who have jumped them since 1990.  Have you seen one bill, one president or one Congress stop the onslaught of all those people?  E-Verify?  Enforce US Code 8, Section 1324? Actually guard the borders? Arrest illegal employers?  Nope!  Instead, you pay for their kids, education, housing, food, medical and babies.  Do those people in Congress take that money out of their $180,000.00 a year salaries?  Good luck with your guess.

In fact, Biden expects to grant amnesty to every illegal migrant, and in fact, all of DACA, and then, all of the migrants marching toward our southern border as you read this column.  Instead of solving the problem, Biden promises to enlarge it, expand it and encourage it. Expect more drugs, anchor babies and criminal syndicates to rampage throughout America’s cities and our kids.

Third, since Reagan with his Trickle-Down Economics in the 1980’s, our national debt jumped from $3 trillion to $26 trillion in 2021.  Do you see one single Congressional Critter attempting to pay it down, stop it from growing or solving it for the American taxpayers?  As Mark Twain said, “Suppose you were an idiot, and supposed you were a member of Congress…ah, but I repeat myself.”

Fourth,  have you traveled to Seattle, Washington with 6,000 people living in tents in the city streets and under bridges?  How about the 11,000 homeless in tents in San Francisco?  What about the 62,000 subsisting in tents Los Angeles?  They leave needles, human waste and trash all over the streets.  Repeat that in Chicago, Miami, Houston, Denver, New York City, etc., with no solution in sight. 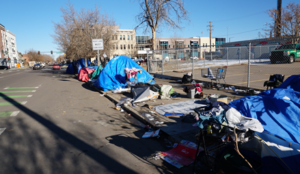 On Saturday, January 2, 2021, my wife and I traveled to downtown Denver to see no less than a small portion of the estimated 10,000 homeless slumming it in tarp tents, nylon tents, rags, grocery carts full of junk, debris for blocks on end, needles, human waste, stench of filth, drug-addicted kids lying on the cement, cardboard mattresses and worse…yet the Denver City Council actually won’t do anything to clean up those slums.  I took 50 pictures of what we witnessed. Just sickening beyond comprehension. I did the same in LA on my West Coast bike trip in 2018. You can’t quite get your mind around 62,000 homeless living in the streets…with no solutions by the elected elite like Nancy Pelosi, Maxine Waters and/or Gavin Newsome.  They let those conditions continue as they toast their friends at parties in Washington DC.

(City of Denver with 10,000 homeless living in tents. Hundreds of trashed tarp tents and junk line the streets of Denver, Colorado, January 2, 2021) Photography by Frosty Wooldridge

Fifth, we’ve got a dramatic and nasty racial crisis in America. We’ve got angry Black people burning, looting, rioting and creating mayhem in our streets.  Instead of solving the problems of Blacks, it’s all festering, smoldering, and growing like a boiling caldron with the wood being thrown into the fire.   We tried to solve it with the Great Society, with WIC and ADC and Affirmative Action…along with BET, Black Caucus, Hispanic Caucus, American Negro College Fund and dozens of other remedies. Result?  Ain’t working folks!

We’ve got 7 out of 10 Black babies born out of wedlock.  We’ve got over 1.0 million Blacks in prisons.  We’ve got massive Black illiteracy in Chicago, NYC, Miami, LA and elsewhere…with no solutions.  Even the Black Caucus can’t solve it or dozens of Blacks in public offices.  If you take a stroll down the streets of Southside Chicago, you’ve got a pretty good chance of being shot by a stray bullet. 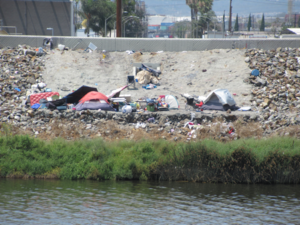 Sixth, while we spend $750 billion annually on wars 10,000 miles away, our infrastructure rots, decays and crumbles.  Around 700 water mains break 24/7 in the USA.  “It is estimated that an average of 700 water mains will break in cities and towns across North America in an average day. Corrosion and rot are the main causes of infrastructure breakdowns.”  (Source: www.waterworld.com)

Instead of money and jobs to fix them, we fight useless, aimless, inane and insane wars that cost us 114,000 American soldier suicides in the past 20 years.  Something must be seriously wrong with your presidents and Congresses to continue such insane wars. (Source: www.stopsoldiersuicide.org ,  Veteran suicide will account for more than $221 billion in public costs. Since 2001, more than 114,000 veterans have died by suicide.)

Seventh, while we now have in excess of 12 million unemployed, our Congress imports 120,000 legal immigrants every 30 days.  That’s legal and illegal and they add up to over 1.5 million annually.  Please help me understand the ‘logic’ , ‘reasoning’, ‘rational’ for such stupidity, moronic choices and sheer lunacy of Congress to do that to us.

Why would they do that when our cities suffer insufferable vehicle congestion, their skies polluted with horrific toxic air pollution and everyone faced with being compacted like human sardines in a sardine tin?

Eighth, we’ve suffered massive loss of small businesses from the Covid pandemic, but Congress floods us with 1.5 million immigrants that have to be fed, watered, housed, educated, and medicated while we, the American taxpayers are getting our asses kicked through a financial brick wall.  What are those “idiots” as Mark Twain would say, doing in Washington DC?

Nineth, this report only scratches the surface of our problems. We’re enduring a political, economic, racial, environmental and sociological riptide the likes that have never been experienced before in history.

Wouldn’t it make sense to create a national conference of the finest economic, community, racial, environmental, climate, engineers, immigration, and population experts in this country to come up with solutions?  Why haven’t those people in Washington DC tried such an option?  We need plans, solutions and actions.  Not more horsefeathers!

As we slog our way into 2021, it’s more than frightening that our own elected representatives make our situation worse, not better.  By the end of another 365 days, it will be worse, not better.  Oh, before 2021 is over probably within six months, President Biden will be assigned to an assisted living resort while President Harris takes over and leads us down the same insane path as her predecessors.

As Mark Twain said, “Suppose you were an idiot, and supposed you were a member of Congress…ah, but I repeat myself.”