The Real America And Her God Loving Patriotic Citizens

My definition, the definition that I’ve always believed in, is that esprit de corps means love for one’s own military legion – in my case, the United States Marine Corps. It means more than self-preservation, religion, or patriotism. I’ve also learned that this loyalty to one’s corps travels both ways: up and down. —Chesty Puller

Patriotic Americans receive devastating news every day…news that either makes them give up, or makes them fight even harder.  We have to keep in mind that God is always in control…He always has been, and He always will be.  And He tells us to think on the good things.

This article is about the good things … those things that represent the true American spirit of patriotic and God-fearing citizens who love this country and will fight for her to their last breath.

Huey Pierce Long Jr. (August 30, 1893 – September 10, 1935), self-nicknamed “The Kingfish,” was an American politician who served as the 40th governor of Louisiana from 1928 to 1932 and as a member of the United States Senate from 1932 until his assassination in 1935. He was a Democrat and an outspoken populist.  Had he not been assassinated, he may well have become President rather than Franklin Roosevelt.

When Huey ran for Governor of Louisiana, he made promises to the people.  One of those promises was that if the rural communities gathered enough signed petitions requesting electricity, Governor Long would make sure they received their requests.  My friend Joe told me the true story of how his grandfather gathered the signatures and gave the petitions to his son, Joe’s father. 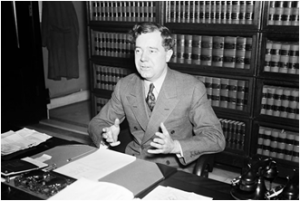 Joe’s parents were married in the mid-1920s, and they lived in a rural Louisiana community.  Joe’s young father delivered those petitions to Governor Long.  Since Joe’s Dad lived on the other side of the Mississippi River, he had to walk several miles to the ferry, wait for it to come, and then ride it across the river and then walk a good distance to the State Capitol Building.

Back then you didn’t have to go through secretaries or wait for appointments, and Joe’s Dad simply told the secretary he needed to see the governor.  He told Governor Long why he was there and that he had the signed petitions requesting rural electricity. The Governor picked up the phone and called someone and told him that he wanted electricity distributed for these rural citizens.  Joe’s dad could hear both sides of the conversation, and when the Governor was told they couldn’t do it, Huey cussed him out and said, “I made a promise to the people, and God Dammit, you do it.”

Joe’s father thanked the Governor, made the long trek back to the ferry, and then the long walk back home.  When he was sitting down for dinner, he looked out the window, and there were the trucks coming with all the equipment and the poles to string electric lines.

That’s how our government worked back then when politicians kept promises and Americans knew they could count on most of them keeping their word. Rural Louisiana was blessed with electricity.

In 1936, a year after Huey Long was assassinated, the Rural Electrification Act was passed which provided federal loans for the installation of electrical distribution systems to serve isolated rural areas of the United States.

On Yom Kippur October 6, 1973, the Holiest of days in the Jewish calendar, a coordinated surprise attack came against Israel. To demonstrate how much Israel was up against: 180 Israeli tanks faced over 1400 Syrian tanks; closer to the Suez Canal, a mere 436 Israeli infantry were poised to fight over 80,000 Egyptian soldiers, this even after Israel’s military buildup. The attacks by Egypt and Syria were backed by nine Arab states as well as one non-Arab state: The Soviet Union.

President Nixon was awakened at 3 a.m. with a call from Israel’s leader, Golda Meir.  She told the President that they desperately needed America’s help to defend their nation.  Nixon immediately heard the voice of his mother… “One day God will call on you, and you must be ready.”

The President knew that the only way to end the crisis and push out the Communist influence was to provide American arms to the Israelis in order to defeat Russian arms in the hands of the Syrians and Egyptians. Both Secretary of State Henry Kissinger and the President wanted to conduct the airlift, but according to CIA Director Vernon Walters, “Nixon gave it the greater sense of urgency. He said, ‘You get the stuff to Israel. Now. Now.’”

Things did not go particularly well for Israel over the next couple days, but as Israel started to push back the daily advances, the Nixon Administration initiated Operation Nickel Grass, an American airlift to replace all of Israel’s lost munitions. This was huge, planeload after planeload of supplies literally allowed munitions and materiel to seemingly re-spawn for the Israeli counter effort, 567 missions were flown throughout the airlift, dropping over 22,000 tons of supplies. An additional 90,000 tons of materiel were delivered by sea. According to Abraham Rabinovich, “While the American airlift of supplies did not immediately replace Israel’s losses in equipment, it did allow Israel to expend what it did have more freely.”

Richard Nixon’s role, and that of those within his Administration, in the Yom Kippur War has been credited with literally saving Israel from an onslaught of potentially devastating attacks. The President recognized the threat that an Arab victory posed, the “threat of victory by Soviet arms,” according to author Conrad Black. The Soviet government was the Arab world’s chief supplier of munitions, and was strategically attempting to spread its influence throughout the region.

Nixon stands out among presidents for taking the boldest risk for Israel: a much-needed arms airlift 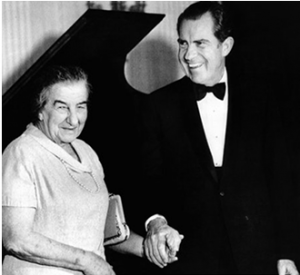 during the 1973 Yom Kippur War. An astonishing 567 missions by American aircraft (not to mention deliveries by sea and El Al flights) kept Israel fighting. Nixon ignored the counsel of Henry Kissinger, who wanted to allow the war to play out for a while longer to give Egyptian President Anwar Sadat the political cover he needed to make peace in its aftermath. The stakes were too high for Israel to play with timing, Nixon told Kissinger.

Nixon had little to gain and much to lose. He was in his second term and, in any case, the Republican was never going to win over the largely liberal Jewish vote. The airlift helped spur an Arab oil embargo, driving gasoline prices sky high. Preoccupied by Watergate and mired in Vietnam, and against the advice of his Jewish adviser, Nixon risked a new war with the Soviets to save Israel.

“Those were momentous events in world history,” noted historian Stephen Ambrose. “Had Nixon not acted so decisively, who can say what would have happened? The Arabs probably would have recovered at least some of the territory they had lost in 1967, perhaps all of it. They might have even destroyed Israel. But whatever the might-have-beens, there is no doubt that Nixon “made it possible for Israel to win, at some risk to his own reputation and at great risk to the American economy,” historian Stephen Ambrose said.

“He knew that his enemies would never give him credit for saving Israel. He did it anyway.”

A great quote from this much maligned American President was very telling, when he said, “Americans admire a people who can scratch a desert and produce a garden. The Israelis have shown qualities that Americans identify with: guts, patriotism, idealism, a passion for freedom. I have seen it. I know. I believe that.”

President Nixon saved our best friend in the middle east and he kept his promise to God and his momma.

At President Trump’s last rally before the mid-term elections, he was in Rush Limbaugh’s hometown of Cape Girardeau, Missouri.  Rush gave a rousing speech, and encouraged the audience to respond with all the slogans we’ve heard so many times.  Then as President Trump entered, Lee Greenwood sang his famous song, God Bless the USA.  Trump smiled, waved, and then embraced both men and shook their hands.

Several minutes into his speech, a woman close to the dais fainted.  Later we found out that she was diabetic and hadn’t eaten in a while.  President Trump asked if there was a doctor in the house and while she was being cared for, he asked for prayer from the audience. A physician came and the President was silent for eight minutes until the lady was loaded on a gurney and taken to an ambulance.  Trump said, “That’s one of our great people there.”

The audience watched as help came for the collapsed patriot and from the back of the crowd came voices raised in song.

In short order the entire audience joined in, singing the first verse of Amazing Grace.  A chill went up my spine and a tear ran down my cheek as I watched these remarkable American patriots sing that wonderful song while one of their own was helped by paramedics as our President waited and watched.

There are many more stories of America’s greatness, we all know that, but these three things from history epitomize the soul of this country, her people, and her greatest leaders, even with their faults and foibles.  As our Lord says, and as we must constantly do…think on the good things!