(True Conservative Pundit) I know, I know – I can hear the comments already.  Why are you writing about that loser Tiger Woods?  Is Tiger Woods the despicable human being that some on the Left make him out to be?

Tiger Woods received the Medal of Freedom and the media blew up like it was the end of the world.  Some said it was just not kosher because President Trump and Tiger Woods are friends and business partners (Tiger Woods designed a golf course for Trump). (source)

Then there were those who cited Tiger’s past indiscretions and his resulting divorce. 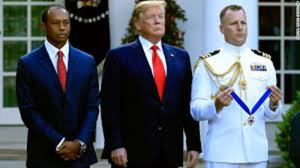 Tiger Woods was revered as the be all and end all in the world of golf.  One year after turning pro, Woods was ranked number one in the world and well on his way to fame and fortune.  Tiger was a cut above the rest of us.

Then came the reports of Woods alleged extramarital affairs and drug problems.  The fall from grace was quick and hard.

As if those issues weren’t enough to deal with, there were Tiger’s serious health issues.  Tiger Woods underwent knee surgery, and four back surgeries.

This writer does not in anyway condone Mr. Woods marital behavior, but to be fair, one needs to look at the entire package.

Imagine that at some point after being outed for cheating on your wife; allegedly using drugs and possibly alcohol, you were to return to playing professional golf.  You know the minute that you step out on the golf course that there are plenty of people who want to see you fail, and fail in a big way.  Everyone is talking about you, and most of that talk is NOT flattering.  The media has had a field day with your missteps and everybody knows your every failure and mistake intimately.

Can you even for just a moment imagine how tough it was for Tiger Woods to leave his home everyday, let alone step back into public life?  Tiger Woods who before was a star, and who could do no wrong – is suddenly thrust under a microscope and most of the attention is negative.  He knows many not only want him to fail; many even think Tiger deserves to fail.  Despite all this, Woods gets out on the course and does what he did best, he plays golf.

To add insult to injury – Mr. Woods also had to come back from some serious physical impairments.  Woods had issues with his knees, so he had knee surgery, BTW – recovery from knee surgery is not fun.  If you have ever watched golf, then you know how the back is twisted during a golf swing.  Now imagine you have had four back surgeries – one of which was a spinal fusion.  Do you suppose that this might affect your golf swing a little?

So it probably seemed like the world was out to get him, no one thought he could make a comeback, plus Tiger had to overcome the rather serious injuries he had received.

This writer cannot prove this obviously, but I think Tiger Woods “can do attitude,” his willingness to admit he did wrong and take responsibility for his actions while dealing with the horrendous amount of negativity and even hatred directed his way – combined with overcoming serious injuries along with equally serious surgeries, these then are the reasons that Trump awarded Tiger Woods the Medal of Freedom.

The Leftist hacks that made this award presentation all about the business relationship between Mr. Woods and President Trump are at best clueless, and at worst lying through their collective teeth.  Trump is viewed and labeled a racist and a hater by the media, so please tell me, who in their right mind would want to accept an award from Trump for business reasons knowing that this person would receive an incredible amount of flack for doing so? Would it not make a lot more sense to refuse the award in that case and avoid all the trouble?

This writer cannot condone everything Mr. Woods did, but at the same time I think given all that Tiger Woods overcame in order to once again become a champion golfer – well Mr. Woods was a good choice for this award and is an inspiration to others.

Everyone makes mistakes, something the Leftists seem to conveniently forget.  If the Leftist liberal whackos are looking for something or someone to condemn, why do they not condemn those who support the murder of helpless babies even on the day they are born?  Why don’t Leftists condemn defending and protecting drug pushers, killers, child molesters, and violent criminals in their sanctuary cities?

No, no, no, it is much more important to condemn a pro golfer who made some mistakes as well as the man who has done more for the U.S. than all the Politicrats combined – President Donald J. Trump.

All the best to you gentlemen.