To propose that the solution to Muslims killings of non-combatant civilian rests with Muslim leaders declaring anyone who does such a thing goes to hell is a product of a delusional mind or an ignorant naive dreamer unfamiliar with the fundamental bases of Islamic violence. Here are a few fatal flaws in this man’s pontification.

*  Muhammad is long dead. There is no one person, a pope-like, in Islam and has never been one the minute Muhammad died. Immediately after Muhammad died, Islam became ISLAMS and kept fractionating and continues to do so to this day. It is not too dissimilar to the death of the founder of a violent gang leader that spawns a whole bunch of contenders for the position that inevitably leads to infighting among the late gang leader’s top lieutenants.

*  Any Islamic leader worthy of his salt would neither dare nor want to issue such fatwa. It is like asking a slave-holder who is leading a very charmed life at the expense of slaves to free the slaves and start working the cotton fields to earn his bread.

*  Furthermore, even this leader who has bought into the system and has reaped the immensely-valued benefits of his position were to in fact give it all up and come up with the fatwa Prager wants, he would be immediately defrocked if not lynched by his own followers as heretic who had betrayed the explicit teachings of the holy Quran where it is repeatedly the faithful is urged to wage war against all kefir, civilians or not.

*  Islam is tantamount to violence. Violence is the lifeblood of Islam and it has been ever since the time of Muhammad in medina by Muhammad’s own examples and conducts.

*  Without violence of all types, Islam will undergo a slow death. Violence is in the fabric of this cult. Take away violence and you shut down the blood supply from the body of ISLAMS. Islam is violent not only against non-Muslims, it is violent against its own numerous sects and offshoots. Even within every sect and offshoot violence in most savage ways is practiced. Public lashing. Cutting of hands for stealing even a morsel of bread. Blinding convicts or hanging them. Stoning the so- called adulteresses. Castrating sexual offenders and hanging homosexuals.

The only answer to a cult born by violence seems to be death by violence. Something like what is going on daily in Iraq and Syria and to some extent in other Muslim lands. The non-Islamic lands will do well to keep this cult of violence out of their countries and let them practice their systemic violence among their contending sects in their own lands. 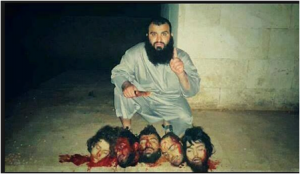 Here are a few rough thoughts you may want to polish, expand and include in a piece about Prager’s notion:

1. Muslim leaders advance to their positions of leadership in the Islam Inc.’s numerous subsidiaries by cleverly and ruthlessly navigating their way through the hierarchical labyrinth of cutthroat competition. Kissing up and demonstration of unconditional loyalty to the higher ups as well as undeviating total devotion to the charter of the corporation as defined and promoted by the particular subsidiary while vigilantly exploiting any opportunity for climbing up the next rung of the leadership ladder are prime requisites of staying in the game.

The individuals who attain high leadership position in Islam have invested their all with great acumen and gone through a tortuous ringer for years for attaining their positions.

2. The profession of clergy attracts a select segment of men. Men who have already significantly bought into the Islamic charter and its methods. As these men undergo formal indoctrination, a culling process takes place. Hundreds of thousands of these men, for a variety of reasons, do not advance very far. The great majority languish in lower ranks for the rest of their life. They are the drones, so to speak. They loyally keep working the rank and file Muslim believers at villages and towns, making them toe the line and pay their tributes and cash to their parasitic handlers who continue their highly successful smoke and mirror charade going. A significant number may leave the ordination altogether, for a variety of reasons, and begin earning their living like the rest of the people.

3. Another not unimportant complicating factor is that the Islamic leaders actually believe the entire Islamic package, as absurd as much of it may seem to non-Muslims. It is in human nature to start believing even the most absurd after having been preached to you by higher authorities and you, yourself, had parroted them repeatedly to others.

4. Millions of Shiites, for example, pilgrimage a well near the city of Qum in Iran to pay homage and tribute to the Shiite’s 12th imam claimed to be hiding there for over a thousand years. No one forces these millions to believe this patently absurd contention successfully hammered in their minds by the purveyors of Islamic fraud–the high divines.

5. It is also wishful thinking and outright naïveté to believe that Islam can be reformed. Islam is interested in reform only in reforming the rest of humanity to its charter of primitive savagery. Realism, not pipe dream, is needed in the Herculean effort to excise the Islamic cancer from the body of humanity. This highly invasive malignancy will not go away on its own. It is determined to devour every uninflected cell of the body of humanity.

6. No, Islam has never been a religion of peace. What we need to

do is demand that politicians, Islamic apologists, and paid-for media do not abuse freedom by lying about Islam. When these people portray Islam as a religion of peace, they are lying through their teeth. Just take a quick look at Islam’s history as well as what is happening today in the Islamic lands. Islam is not a religion of peace and it has never been. Islam is violent, oppressive, racist, and irrational at its very core. It is treachery for people to present it as otherwise, either out of ignorance or because of their own personal reasons.