There Are NO Blue States

Most Americans think we are headed into some form of “civil war” between BLUE and RED states, as the nation is divided, angry, and motivated to fight, more than at any point in our history. But the simple truth is, there are no BLUE states in the USA. There are only a handful of BLUE cities, all of them run and controlled by democratic socialists, and all of them on the verge of total collapse from gross mismanagement.

The fact is…that Biden victory is mathematically impossible, and there are no BLUE states in the USA. There are only BLUE socialist cities, and only a handful of them even matter, the worst cities in our country, by any method of measure. Do they really think BLUE city folks are going to move out into this RED country and take it over?

Of course, these are also some of the most densely populated cities in our country. What we are experiencing as a nation is what a friend at TNALC.org labeled “urban nullification,”wherein the views and interests of 84% of America is being controlled by the 16% major urban city populations, due to densely populated areas of the country, all of which have severe problems.

Again, these are all heavily democratic socialist cities and most, if not all, have the toughest anti-gun laws in the nation. Still, these cities largely occupied by America-hating Marxists are being entirely destroyed by gross mismanagement under democrat politicians. The safest place to commit a violent crime of any kind, is a “gun-free zone.” 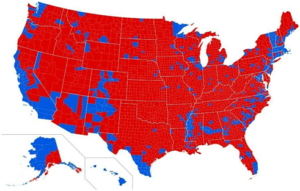 The BLUE specs on this otherwise all RED national map are the problem areas of our country. This is where most of the anti-American democratic-socialists live and vote, millions of them, illegally. These are the left-wing extremist zones that are responsible for driving our entire country into total ruin. These are the urban areas currently cancelling (nullifying) 84% of the nation.

Thanks to nine months of Obama’s puppet regime and their mismanagement on the national level, Biden and Harris have done more to convert Citizens into diehard Trump fans than another four years of Trump ever could have. More importantly, Biden and Harris are converting young public classroom educated socialists into future conservatives, thanks to their heavy-handed tyrannical insanity.

A “civil war” wouldn’t be much of a war, especially since all that RED territory is littered with Bible-reading gun-toting hunters and veterans, just about fed up with the tyrannical nature of those “tolerant liberals” busy trying to “cancel” everyone who isn’t just like them.

A second civil war? No…

But a collective uprising of all pro-American Citizens tired of being dictated to by mental midgets and public servants? YES! These BLUE cities are responsible for 90% of the election fraud in our country. Do we need a war to stop them from stealing elections in the future? Or do we just need to disqualify their districts due to their massive voting irregularities and election law violations?

Do we need to go to war to prove that no one has any right or authority to jab anyone with anything against their will? Or do we simply need to stand up together in mass and say “NO, not here!”

A war between the states? Why would we? There isn’t a single BLUE state anywhere in the country. They are all RED, except a handful of problem cities. How long could it take for RED BLOODED AMERICA to isolate these BLUE cities and let them collapse from the weight of their own decisions? Maybe that’s where we need walls…

If those BLUE specs on the map think they can cancel the rest of us, I issue this caution… Think hard, real hard, before you take that step. 84% of this country will not play with you. We’ve had it with Biden, Harris, Obama, Pelosi, Schumer, and all of you responsible for them. Chatter all you want but watch your step… FREEDOM is no game!

The conservative Right may hope and pray for peace, but the insane Left has declared war on 84% of America, like it or not. Personally, I like our odds… Evil makes war against Good, no matter how good people feel about it. Evil can only prevail, where good people do nothing to stop it!

“Silence in the face of evil is itself evil: God will not hold us guiltless.”These are famous words of Dietrich Bonhoeffer, a Lutheran Pastor who was killed by the Nazis for resisting the regime.