Skip to content
Home/Opinions, September 2018/There Are No Grand Solutions Without Grand Participation

There Are No Grand Solutions Without Grand Participation

During the Revolutionary War of 1776 there were around 2,500,000 inhabitants of the 13 Colonies.  At the height of the war around 80,000 militia and Continental Army soldiers actually fought the war against the British that had around 86,000 soldiers.  The 80,000 American soldiers represented just 3.2% of the total population.  Hundreds of thousands of Americans escaped into Canada.  At least one third were loyal to the British.  The rest of the population tried to ignore or avoid the war without any affiliation or participation.

What is abundantly obvious from all these statistics is that 80,000 Americans sacrificed their lives, their limbs and their minds to give birth to freedom for the other 2,420,000 ignorant, apathetic, or disinterested Americans who went along for the ride with little sacrifice.

In the intervening years since the first Revolution, America has grown in population from 2,500,000 to somewhere between 320,000,000 and 330,000,000, over a 100 fold increase.  Over half of that population is now dependent on government and leaning heavily towards socialism.  That dependent segment of the population appears to be un-apologetic about their desire for Big Brother government and in fact relish the prospects.  Most of these government-dependent people reside in large urban centers.  According to the U. S. Census Bureau urban inhabitants now represents 80.7% of the total population.  The trend on which way America is headed should be crystal clear.

But in what could be a violent contrast, millions of Americans still believe in personal freedom and 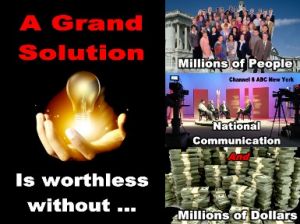 further believe that the U. S. Constitution is the Supreme Law of the Land, a Supreme Law that mentions nothing about socialism, much less government dependency.  Just the opposite is true.  These millions of freedom-loving Americans believe strongly in natural, God Given, unalienable rights, individual freedom, self-reliance and personal responsibility.  The contrast between these two groups of Americans is so stark that compromise or co-existence becomes not just problematic, but virtually impossible.  They are in fact oil and water that never mix.  Those that represent the people in government (politicians) are a direct reflection of the American mindset.  Thus, this stark contrast in mindset is why the U. S. Congress has become an impotent legislative body and an impediment to good government under the Constitution.

If this condition is allowed to proceed much longer without intervention, a violent war between the two sides is inevitable.

Of course many on both sides are aware of the conflict, but seem powerless to stop it.  Those dependent on government, or longing for growing socialism, want to see the status quo continue and expanded in their favor with more government handouts and benefits, without regard to where the money is coming from to pay for it all.  Those opposed to the status quo want drastic change and a return to American founding principles.  As the condition worsens this second group of Americans is approaching a violent solution.  Civil war could not just be an inaccurate prediction but the coming reality.

Those Americans that want to see a return to a Constitutional Republic are falling all over themselves with solution, after solution.  But each solution is doomed to failure because one, they are too small and fractured and two, they haven’t lined up the three vital components necessary to be successful.

The first component is a large enough group of people totally united and committed to the solution.  If 80,000 soldiers fought for and won freedom for 2,500,000 other Americans, that 80,000 represented 3.2% of the total population in 1776.  At the very least an equal percentage of the current population must be enlisted to fight for the return to a Constitutional Republic.  3.2% of the current population represents just over 10,000,000 people.  The difference between 1776 and 2018 is that those 10,000,000 united and committed people of 2018 can do the job without resorting to violence.

The third component of a successful and peaceful solution to restore the Republic is money and lots of it.   But money is a much more preferred ingredient to violence and the huge loss of life and property that would come from a civil war.

America is so wealthy, the amount of money necessary for a solution to be successful amounts to nothing more than providing a powerful, believable message and communicating that message to millions of Americans.  The powerful message is easy and the means to communicate the message is readily available everywhere.  But to communicate the powerful message takes money ….. and lots of it.  If just one tenth (1/10th) of those 63,000,000 voters that voted for Donald Trump contributed just a miniscule fraction of their annual earnings, the money to fund a successful solution and a return to America’s founding principles would pour in like water over a waterfall.

The hard fact is, we are being horribly outspent by the other side and they are winning simply because they found a significant money source.  Don’t be fooled.  The winning of this war is largely about money.

As we mentioned in our last article entitled: “Is the Future of America An Avalanche of Socialism“, we wrote:

“Until there is a massive mindset shift towards conservative principles, America has no hope as a free nation.  That mindset shift can only come from an emotionally powerful visual, audio and print message repeated over and over again.  Such an emotionally powerful message has the capability to overcome the generational brainwashing of millennials and middle aged Americans.  The fact is, you can’t change public policy unless you change the mindset of the masses, or those that represent them!  Short of this, all other mechanisms for change will eventually fail.”

That mindset shift can only be achieved by adopting the three components of a successful solution described in this article.  Anything less will not work.  The brainwashing and indoctrination of the American people towards socialism and collectivism by evil forces (Progressives, socialist Democrats) extends over at least three generations.  It is impossible to undo that indoctrination using American institutions that have already been infected. Fractured efforts by well meaning patriots with too few people, poor access to communication and feeble amounts of money, are doomed to failure.  The only peaceful solution to restoring America to the vision of its Founders in as short a period of time as possible, (2 election cycles or less) must be BOLD and external to corrupted American institutions.  The effort has to be emotionally powerful, meaningful, massive, overwhelming and repetitive.

Ladies and gentlemen, why would Americans sacrifice billions of dollars, massive military weapon build-ups and millions of men to free Europe in two world wars, but are not willing to sacrifice ANYTHING! to save America from committing national suicide by becoming a socialist, third-world nation?  Take that unexplainable quandary to bed with you tonight!

We’re starting a peaceful war here in America.  Do you have the courage to join us?  If you do, check out the three components to our peaceful war HERE and why they will be successful.

But as the title to this article implies, “There Are No Grand Solutions Without Grand Participation.”

Once again, without your participation, our BOLD and GRAND solution will be relegated to the scrap heap of long forgotten freedom movements dating back to the beginning of human civilization.  Many civilizations have tried, but most fail.  They fail because the masses are cowards, weak, broke and unorganized.  They would rather capitulate to power and tyranny rather than confront it with force.  Those brave souls that challenge power and tyranny are too few to win.  You cannot win a war (and we are in a war) without the three “M’s” ….. Men, Materials and Money.  Our solution provides the three “M’s.”