“Gun violence spiked over the Fourth of July weekend, with shootings reported in nearly every U.S. state that killed a total of at least 220 people and wounded 570 others,”  according to CBS News, July 5, 2022.

Highland Park, Illinois: Robert Crimo, 22, mentally disturbed throughout his teens with suicide attempts, saying that he would kill people with 19 knives he had accumulated, bought a rife with help from his father—and shot up a 4th of July parade with seven deaths and 30 plus wounded. 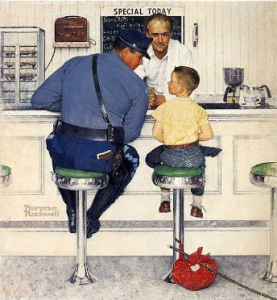 You can’t help but wonder—What happened to Norman Rockwell’s America?  He painted covers on the Saturday Evening Post Magazine that depicted a kinder, gentler and more civil America.  He painted kids going fishing with grandpa.  He painted girls dancing with their fathers with their feet on dad’s shoe tops.  He painted baseball games with something always uniquely American.

As a paperboy from age 12 to 18, I enjoyed his view of America. I also delivered the Jacksonville Daily News, North Carolina. Later, I also delivered the Atlanta-Constitution Journal seven days a week at 5 a.m.  Rockwell drew one cover shot of a paperboy outracing a dog nipping at his pants.  Well, I was that kid!  Dogs chased me all the time.

But I can tell you this—I never read headlines that we’ve seen since April 20, 1999, Columbine High School, Denver, Colorado, when killers Klebold and Harris shot the hell out of students and teachers.  Sandy Hook Elementary, December 14, 2012, some kid uses a rifle to blast two dozen little kids into oblivion.  Uvalde’s Robb Elementary just weeks ago, suffered a horrific slaughter of kids.

October 1,2017: That one guy in Las Vegas mowed people down at a concert in the park. He just sprayed bullets to kill 58 and wounded 489 people listening to music and drinking beer.  How did that happen?  What nurtured a mental nightmare that dwelled inside his skull?

A year ago, at a King Soopers where I used to live in Boulder, Colorado, suffered a Muslim immigrant who walked into the store and gunned down 13 people. He did it for Allah. I  could have been one of them.

Last week, two Mexican illegal aliens were stopped in Texas with 150,000 fentanyl pills in their car—to be sold all over the country. And, those pills could have killed upwards of millions of drug users. They were the ones that got caught. With over 107,000 opioid deaths last year, you might think Joe Biden would seal the borders.  Nope! That’s not on his list of “things to do.”

Something is going wrong in America that is beyond comprehension!

Over this past 4th weekend, how did 570 men shoot to kill 570 other people, and actually killed 220 of them?  I can’t even get my emotional and mental arms around that kind of killing.

Biden and company think it can be solved by stopping gun sales.  Psychologists and sociologists think up different societal glitches that need to be addressed.

At some point, American leaders, teachers, principals, educators, and parenting associations need to come together to figure out HOW raise our children to be productive, contributing and mentally healthy human beings.

In the meantime, my wife and I won’t be attending our Christmas Parade in Golden, Colorado this December, because we could be the victims of another Harris and Klebold who just decided to pick our town and that parade.  We attend movies at the matinees, so we won’t get shot at an evening showing with a lot of movie-goers. We never walk the malls for fear of being shot.  We don’t go to downtown Denver at the 16th Street Mall because, quite frankly, it’s dangerous with 10,000 homeless living right there in the streets.

This country faces some really nasty events in the near future.  We’ve got useless politicians who won’t prosecute criminals, an absolutely senile president who lacks any understanding of what he is doing, and his “handlers” are as incompetent as he is, and, to tell you the truth from my position…nothing is going to change for the better. Biden just allowed another 240,000 illegals to cross the border in June, and God only knows how many tons of fentanyl, cocaine, hash, heroin, meth and MJ.  Those drugs make people crazy, and they make them crazy enough to kill other people.

Norman Rockwell must be turning over in his grave wondering what happened to his America?  About the most I can do is repeat what Walter Cronkite said, “And that’s the way it is on July 7, 2022.”