Home/Opinions, September 2017/Those That Can Fix It Just Keep Kicking The Can

Those That Can Fix It Just Keep Kicking The Can 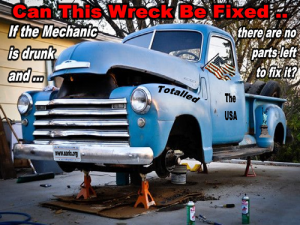 On November 8, 2016 the American people assessed the damage inflicted on the nation by years of collectivist mis-government and delivered a thundering verdict at the polls. The election of Donald Trump signaled the culmination of one process in our politics and the beginning of another.  What culminated was the growing disenchantment of the American public with shopworn practices generally called “liberal” but which in their devotion to big government and hostility to individual freedom are in fact illiberal and reactionary.

What began was a painstaking effort to restore America to the path of greatness from which it had been derailed by more than a generation of excessive government.  By creating an opportunity for such restoration, the election of Donald Trump was a marvelous beginning.  But it is crucial to stress that it WAS a beginning and that years of work and struggle remain before our liberties are once again secure.

The federal government of the modern era spends far more money and exercises far more power over our daily lives than our founding fathers could possibly have envisioned and far more than the average citizen of the present hour can possibly imagine.  And driven by the dynamics of the welfare state psychology, that spending and the accompanying power have been expanding at a giddy rate that is equally hard to fathom.

Most observers are now willing to admit, the end result of all this spending and government regulation has been a cataclysmic failure.  We have created such enormous and costly burden of government spending, taxes and regulation on the home front that we have crushed the productive vigor of the economy while feeding the fires of inflation and excessive increases in the money supply.

Simultaneously, we have seen a drastic weakening of our national posture oversees.  Despite the constant outcries that we hear about the military-industrial complex, the truth is that we have actually financed our recent binge of domestic handouts by siphoning money from essential military needs.

In all these respects, the task confronting the Trump Administration and the country can be summed up under a single heading:  “To reclaim control of the political system, the economy and the freedom of the average citizen from the elitists who have created all this enormous power and who, because so much of it is insulated from popular authority, still exercise tremendous influence on national policy.”

A major part of the problem is the sheer size of the federal government.  The central government has grown to such monstrous proportions that it has sucked the lifeblood from our states and local communities, profoundly changing the nature of our federal system.  But at the same time, it has become so huge that it is often beyond the control of federal officials – at least the elected ones.  To a degree that the average American only dimly comprehends, it runs according to its own momentum.

It is this enormous, rudderless federal government that is the basic source of our economic problems, i. e. run-away spending, confiscatory taxation and oppressive regulation, which together have crushed the life out of our economy.

Until President Trump is able to push his budget and tax rate cuts through Congress, the projected outcome will be a continually declining standard of living, the continued loss of jobs, more government intervention, higher inflation and the ultimate prospect of financial panic and collapse.

At first blush the reader of our column will be inclined to believe that this author wrote the previous passages, but they would be wrong.  We took these passages right out of a booklet by William E. Simon, Treasury Secretary under President Ronald Reagan.  The passages were written in 1980 over 37 years ago, in a short book entitled “A Time For Action.”  The only changes we made were to the date where we substituted November 8, 2016 in place of November 4, 1980 and substituted President Trump for President Reagan.  It’s an excellent short book and we encourage everyone to read it.

In 37 years nothing has changed except that the problems have grown worse ….. much, much worse.  For much longer than that, the Progressives and the fully embedded “Deep State” have thwarted any hopes of changing course.  So entrenched in their beliefs that they are “right” and their in-exhaustible lust for power, they are doing everything to impede or outright stop Trump from implementing his goals of America first, plentiful jobs, a healthy economy and peace through unbeatable military strength.  Their hidden goal is to destroy or discredit Trump by any means to the point that he will be politically impotent, if not forced to resign.  They have academia, the news media and a majority of the American people and now the entire sports community behind them to complete that goal.

This cabal of Progressives, academia and the news media attempted to do the same thing to President Reagan but were essentially unsuccessful, that is until the following four Presidents, at which time they became even more entrenched in America’s political system.  Under President Obama their entrenchment only strengthened.  The “System” they have created may actually be impenetrable.

The inescapable slide of America in the direction of all past countries, societies and cultures cannot be denied. What usually precipitates the destruction comes on the heels of three specific growing conditions.  The first condition is societal apathy, the second moral decay and the third, solidification of inflexible “Systems”, leading to rapidly increasing regulations, higher taxes and rising central government power.

People react to the seemingly impenetrable “System” by becoming more apathetic and resigned to the inevitability of the “System”, without considering the possibility that the “System” can be changed.  They feel helpless and impotent.  Or, maybe they are just plain lazy and the fight has gone out of them. But the reality is, it will take a great deal more effort to defeat the “System” than sitting on the couch watching “Dancing with the Stars” or Sunday Night football, hoping that someone else will do the job.

The “System” is an intertwined entanglement of interlocking national and international interests of commerce, finance and trade, accompanied by government enablers of the “System” in the executive, judicial and legislative branches. The tentacles of one interest are inextricably interwoven into the tentacles of all the other interests.  Finding out what drives one, leads to a complex maze of closed doors, backrooms and secret meetings.  All the sources are purposely hidden and camouflaged.  Traces to find the truth go down dead end paths, or are blocked by impenetrable obstacles.  Sources of the “System’s” power are elusive and they are anything but constitutional.  The “System” exists because of citizen apathy and survives, thrives and grows on the people’s money and special interest agendas.

Examples of the “System” are almost endless. Unions, socialists, environmentalists and the broad category of government, at every level, drive America’s public education (or should we say indoctrination) “System”.  Attorneys, judges, court clerks and tens of thousands of state and federal rules, drive the judicial “System”, such that if justice ever finds a court, it will have become a worldwide miracle.

Special interests, including internationalists, corporations, unions, socialists and environmentalists, drive federal, state and local governments and each is part of the “System.”  Corrupt politicians whose only priority is to get elected or re-elected, drive the legislative branch of government and are part of the “System.”  Even the good politicians, if that is not a contradiction of terms, will eventually be sucked into the “System” if they want to get re-elected.

The “System” gave us the 16th Amendment, the Federal Reserve, the Internal Revenue Service, the New Deal, Social Security, the Great Society, expanded welfare, free cell phones, Medicaid, Medicare and Obama Care with each one just another name for socialism.

The “System” brought Americans the suspension of the Gold Standard. The “System” gave us worthless money that is an instrument of debt, backed by nothing.  American currency is valueless, supported by a government-created mirage.

The “System” gave us a news media that is devoid of objectivity and now personifies a wholly liberal “System” bias.

The “System” gave us liberal colleges that now only espouse one liberal viewpoint and silences any other, sometimes violently.

The “System” gave us social justice, a liberal ideology that promotes and supports only the collective, never the individual or individual rights.  Under this ideology the U. S. Constitution has become virtually meaningless.

So you see ladies and gentlemen, this “Old Wreck” of a country is in dire straights.  Those sent to fix “her” are drunk with power and corrupt.   The essential parts necessary to fix the “Old Wreck” are no longer being manufactured and are out of memory.

If Trump is not successful and the cabal of Progressives, academia, the news media and over half of the American population (the “System”) take him down and regain partial political power in 2018 and full power in 2020, the “Old Wreck” of America will be impossible to repair.  As long as those that today have the power to “fix it”, keep delaying or kicking the can down the road, a future Reagan or Trump will never be elected because Americans keep allowing history to repeat itself over, and over, and over again in furtherance of their own demise.  As long as Senator’s Collins, Murkowski, Paul, Portman and McCain keep the Republican Party from completing any meaningful legislation, the Republican Party is impotent, if not dead and will be replaced by the other party at the next election.

Many of our readers lament that we describe the problems but never the solutions.  “What are the solutions?”  There are no peaceful solutions as long as the Progressives, academia, the news media and over half the American population are in the majority and control the political process.  That’s reality.  Is there another solution?  Sure there is, but it’s very messy and violent and the outcome may not yield the desired result.

Do you “AGREE” with our assessment?