Home/February 2018, Opinions/Time Is Ripe For Removal Of The Iranian Mullahs

Time Is Ripe For Removal Of The Iranian Mullahs

There were never any questions about the Islamists denigrating Iran and exulting Muhammad. These mullahs owe their very livelihood and very existence to the lucrative business that Muhammad launched for their parasitic and shameful existence. It is vital for these leeches to continue trumpeting the sainthood of their business founder driving all other competition out of Iran. Give these worms credit for paying homage to the source of their shameful livelihood.

The battle against these pseudo-humans is arduous and long. It is with the true sons and daughters of Iran and the rest of humanity with both integrity and conscience to fumigate these leeches from the body of planet Earth.

Iranians hope this new uprising, is not a repeat of 2009 when Obama threw a lifeline to the mullah’s regime by not supporting the Iranian people and in effect siding with the genocidal mullahs. These turbaned thugs were taking their final breath, completely broke, and the good old USA comes to the rescue releasing billions of dollars at the end of Obama’s second term while easing other sanctions. Hard to understand. 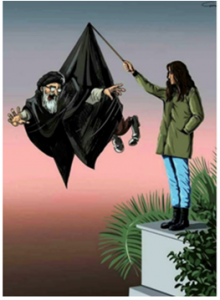 Iran is a land of beauty and love, but also a land of turmoil. At this critical crossroad in her history, this old nation, perhaps, the mother of all nations, needs all of you. This very rich culture has given the world many great scientists, in all areas, unparalleled poets, such as Rumi, Ferdowsi and Hafez.

Iran has the youngest and brightest and the most educated population of any country at this time in history. Iranians, like many other nationalities, have been struggling to achieve the liberty, justice and freedom that are being enjoyed, mostly, in western countries.

The current revolt may not lead to the immediate downfall of the regime, but we are witnessing the death throes of the Islamic Republic. Even if the uprising ends today, it is but one step in a long struggle to achieve a more representative, democratic and popular government.

Iran’s Islamic leaders were surprised by the scale and location of the protests that first erupted over economic grievances on Dec. 28, and then quickly turned political and spread to more than 130 cities and towns – many of them long considered conservative bastions of regime support.

What we are observing in Iran now should not be viewed as a selective outcry, but rather a work in progress, a hybrid momentum that started in 1999 and led by students who later became involved in the Green Movement. They are belatedly joining the current unrest, which is evolving to include new social classes of people who were not at the center of previous protests.

As has been reported, there will be two massive rallies in Iran going head to head on February 11, 2018. One, by the unarmed Iranian people in every city and town across Iran, fighting for freedom and liberty. The other rally will be led by the brutal and heavily armed Islamic Revolutionary Guard Corps (IRGC) and the Basij forces (a paramilitary terrorist organization) and their paid supporters on the occasion of the 1979 victory of the Islamic Revolution in Iran.

As usual and sadly, the IRI will completely disconnect the Internet, including Instagram, Telegram, the country’s cell phone towers and other methods of communication, in the fear the world will witness the true reality and the real conditions in Iran.

The Islamic Republic has stationed revolutionary and militia troops to actively and deliberately prevent anyone from any demonstrations or objections against the totalitarian regime. They are planning to silence people by any means available to them.

Meanwhile, the regime’s propaganda (media) machine and their allies in the west, the Washington Post and New York Times among others, will broadcast only the IRI’s version of events.

Time has arrived to end Mullahs reign of terror. We Iranians and Iranian-Americans in spirit—free people of the world–greatly cherish individual liberty and freedom, where the mind is imbued with enlightenment, and every individual by virtue of being born human is afforded measured freedom. It is within the open expanse of liberty that each and every person can be at his or her best. And when the individual person is at his best, humanity is as well.