To Ignore Principles Is To Invite Chaos

Human newborns, no matter what culture or geographical location, are very much like computers with empty hard drives.  You can fill the hard drive with truths, (say a well-written program that can be an excellent tool) or you can dump garbage into it and have it produce gibberish.  Babies are also like sponges and they absorb everything that their five senses ingest, either good or evil.  Babies are not pre-programmed for good.  They can be molded into any type of human their handlers want them to be.  If babies are left to their own resources, should they survive to adulthood, they become the sum of all of their inherited characteristics and all of their experiences and how their mind processes those experiences.  We have previously described this process in our “Little Black Box” Theory. 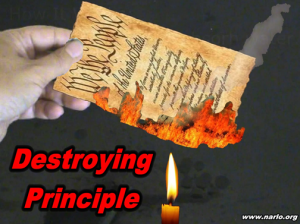 But babies are not responsible for whom or what they become, their parents and their teachers are.  That is a huge responsibility that way too many folk take lightly.

So we as parents and teachers have a choice.  We can instill solid “principles” of right and wrong, self-reliance, discipline, compassion and responsibility in our charges, or we can instill incarnate evil, dependence on government and everything in between.  Or, we can allow them to be brainwashed, as is happening in our public schools and colleges today.  But if we do nothing, the outcome of our children and what they will become is unpredictable, as they will be subject to random influences.  Under random influences, a child has the possibility of becoming a Hitler, a George Washington, or a derelict, depending upon the principles, or lack thereof, that have been recorded on their “hard drives”.  But whatever we do, or don’t do, for or against our children, can have a profound effect on history and future generations.

A couple of thousand years ago, a set of moral “principles” were handed down to the peoples of the time.  “Principles” that have stood the test of time and that have been the bedrock of at least two major religions whose heartbeat started in and near Jerusalem in what is now Israel.  Those principles have been the fabric and foundation that have kept these religions alive and going strong, for well over 2,000 years.  Splinter religions that strayed from, or significantly altered the “principles”, fell by the wayside and disappeared from view, or became ineffectual fringe elements, or outcasts, or cults.

Countries and cultures are a great deal like the minds of young babies.  They can either establish a set of strong principles to govern them selves, or allow them selves to be subject to random influences, or worse, in their apathy and indifference, allow their governors to usurp unlimited powers.

There is an inviolate law of nature that was set down by scientists of the 19th century as the second law of thermo-dynamics.  It is called the law of entropy.  In simple terms the law states that any entity, any living body, has only one path from present to future and that path is from order to disorder.  A body with heat, in time, loses that heat.  A cell or cells in an organism eventually wear out and die.  The orbits of planets and moons ultimately decay and they sometimes crash into their suns, or their host planets.  Suns, like our own, use up their energy and in time, burn out, expand into red giants and then collapse into very dense white dwarfs.  Even our Universe may be headed for what scientists call heat death, where all heat is dissipated to nothingness and only deep cold is left.

But like many laws, there are some exceptions.  It seems that there is another mysterious force at work in our Universe, wherein order emerges from chaos and instead we get the opposite of entropy.  Massive supernova explosions of giant stars spew out elements, billions of miles into the surrounding void, elements that are manufactured in the bowels of the dying star from nuclear fusion.  Over time those elements coalesce into huge clouds of gas and the gas clouds then begin to collapse under gravity and form new stars that heat emerging planets, upon which on some, life is born.  Thus, from the death of a star, from order to disorder under the law of entropy, comes order in the form of new suns, planets and life, and in some cases intelligent life.  All life and inanimate matter on earth is made up of the elements that were manufactured in massive star supernovas.  And by some operation of principle, or law, those elements assemble themselves into objects with form and purpose, like stars, planets, rocks, water, plant and animal life.

On Earth, at least, a plant rises up out of the moist, rich soil from a tiny seed no bigger than a few grains of sand.  Its journey through life is preordained.  It cannot sway from the goal set for it by its genetics, chemistry and biology.  Those limits are its “principles”.  Somewhere along the way a bud forms on the end of a stalk or tendril of the plant and in but a few days, erupts into a splendor of color and a soft, enticing shape; each plant having its own unique form.  Deep inside the flower, which it has now become, lies the makings for its offspring and with a little help from other creatures, the chemical means to allow it to reproduce.  Soon it is visited by a host of flying insects and birds and from that embrace and the ultimate distribution of the contents of its interior, the seeds are sown for a new generation of the species.

In contrast, human beings of Earth are far different than the plant, even though they too come from a seed.  Humans possess what all plants and most, if not all animals, do not possess.  Humans have pre-programmed into them volition, free choice, an ego, an id, a will to determine their own direction, their own future.  But humans, without adherence to sound principles, invite chaos and can wander aimlessly, without purpose, or create havoc among the rest of the population, like Hitler, Stalin, or Mao.  Many of these hapless souls become easy pray for governments looking for votes ….. or slaves.

As we go about the business of work and play in America, as we sit at the dinner table with each member paying more attention to the electronic device in their hand than to the people at that table, as we seek mindless television entertainment, as we indulge in destructive behavior or mind altering drugs, as we ignore what is happening in the world around us, or holding accountable those that govern us, we are ignoring the principles of our freedom and we are allowing this generation to descend into the chaos of slavery, which then impacts all future generations.  How can the people act against tyranny if they are unaware of, or choose to ignore, a clear and present danger, from foreign or domestic enemies, especially domestic enemies?

It is written that eleven score and twenty-one years ago, ‘our founding fathers brought forth on this continent a new nation, conceived in liberty’, in which the unalienable rights, granted to us by our creator, were codified into a set of “principles” under our Constitution.  ‘And to secure these unalienable rights, governments were instituted among men, deriving their just powers from the consent of the governed.’  (How many of you feel you are giving consent to the government?)

‘Now we are engaged in a time’ of contentious conflict, confusion, turmoil and division, amongst our own people, severely ‘testing whether that nation, or any nation so conceived and so dedicated, can long endure.’  But without adherence to and the defense of the “principles” upon which this great nation was founded, the law of entropy will surely lead us from order into chaos and we shall crumble and decay into socialism, despotism, or a dictatorship, as have all past nations who toyed with freedom throughout the history of man and lost it.   The future of freedom is in our hands, but only if we fiercely adhere to the principles handed down to us by the brave and courageous men and women who forged America, in a time of turmoil, conflict and confusion.

Author Don Porter recently wrote:  The United States was established as a society of individuals who were free, by and large, to engage in any occupation or economic enterprise without the government interference of regulation.  A society where people through their own efforts could accumulate wealth in amounts unlimited by government interference.  They could do with that wealth as they pleased, spend, invest, save, donate it, or throw it in the river if desired.   It was the Founder’s belief that America could do more for the rest of the world by giving them an example of how a nation could prosper through a society of individuals free from government interference in their lives, living free and governing themselves, a way of life in which the government had very little power to tax, regulate, or take care of them except protection from foreign intervention.

My plea to every American all over this great nation of Individual Freedom, is to educate and enlighten ourselves to what is happening to America by the direction the people of this Socialist movement is taking us.  We must awaken ourselves and recognize the ominous signs of the sinister and threatening danger, which these people and their backers are attempting to implement upon the people of this Free Republic.  The real danger is ignoring the Constitution and becoming a nation of people whose lives are regulated by them through our Federal Government.

“To Ignore the Principles” contained in the U. S. Constitution and the intent of the framers “Is To Invite Chaos” into our lives.  We assembled some of those basic principles in our “18 Principles For Freedom” document.

But as we have said before, these are just meaningless words if no one believes in them, or are unwilling to act in their preservation and defense.

Who among you will “Preserve and Defend” these principles?