To Kill A Free Nation, Take Over Public Education

“We begin with the child when he is three years old.  As soon as he begins to think, he gets a little flag put into his hand. Then he follows the school, the Hitler Youth, the SA [SA= German Assault Division] and military training.  We don’t let him go. And then when adolescence is passed, then comes the Arbeitsfront, [labor party] which takes him again and does not let him go until he dies, whether he likes it or not.”  —Robert Ley, Nazi labour chief, 1938

In an article we penned a few years back entitled, “Our Little Black Box Theory”, we wrote:  “The fact is, a freshly born human being is nothing more than a giant sponge that absorbs everything that it hears, sees, smells, tastes, or touches in its immediate environment and all that it absorbs is, for the most part, locked into its “Little Black Box” for the rest of its life. [including everything it learns and remembers from school]  The person is a slave to it, but is not aware that they are a slave, because it defines who they are.  They can be nothing else.” 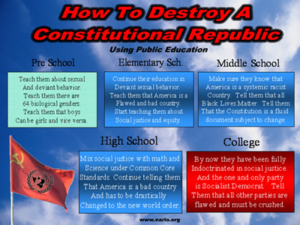 Essentially, it is very easy for a parent, a special interest group, or a government to literally manufacture any type of human being they want.  The Chinese Communist Party has taken this one step further by manipulating the DNA molecule to create so-called “super” human beings, or in their case “super” soldiers.  Babies and elementary and adolescent humans are soft and malleable and can be molded to possess certain characteristics containing the pre-determined attributes of its teachers, just like Hitler did.

The forces that are influencing our public schools are global.  Just the other day we received an e-mail from “Discovery Education”, a global entity that provides alleged educational curriculum in digital format to school systems all over the world.  What do their curriculums contain?  Who writes their curriculums?  They don’t say and we could find no sources that would tell us.  Nevertheless, “Discovery Education” has a huge presence in America’s public education.  Have you heard of them?

We had never heard of  “Discovery Education” before and decided to investigate further.  No matter where we looked, we could not find the people or the money sources behind “Discovery Education.”  The e-mail we received from them was celebrating Human Rights Day.  The e-mail was laced with social justice and equity, both socialist-globalist terms.  The e-mail also had a section on “unlocking the power of testimony to counter hate,” a program created by the USC Shoah Foundation centered around testimony from the Holocaust.

“Discovery Education” even has videos on “Social and Emotional Skills.”   One such video allegedly “equips students with the skills necessary to reduce stress and create ‘Sustainable Happiness’ by providing curriculum and standards-aligned resources.”  Ever heard of the word “sustainable” before?  Of course you have.  It is right out of United Nations Agenda 21.  Liberals love this word.

We did learn that that “Discovery Education” just purchased “Mystery Science” for  $140,000,000.  Where did “Discovery Education” get $140,000,000?  George Soros maybe?  “Mystery Science” provides digital and video science information for K-5 children.  Are the videos they provide totally science objective, or do they inject social biases into the information?   Is Climate Change included in their videos?  Of course it is.  “Mystery Science” is also heavily represented in America’s public education system and provides science information to highly vulnerable elementary school children, a very good place to cement information, true or not, in their “Little Black Boxes.”

This doesn’t even include the socialist textbooks you will find in almost every classroom.  That is a whole other subject in itself.

But then along came Common Core State Standards (CCSS).  We received a math teaching document about CCSS a while back and what we read made the hairs on the back of our neck stand up.

Here are some excerpts from the document:

“All students are entitled to quality instruction within an equitable learning environment, designed to meet their specific learning needs.”

What stood out from this sentence was “….. an equitable learning environment“.  We wondered, “what does that mean?”  Reading further it became clear what it meant and it had nothing to do with math.

“Promoting and supporting equitable practices for students is a complex process and is best supported when your collaborative team examines several factors.  The National Council of Supervisors of Mathematics’ (2008) position statement on equity recommends that mathematics educators:”  [NOTE: Only educated idiot psychologists and sociologists can make something a complex process]

This so-called mathematics-teaching document finished with:

So then we decided to look into the National Council of Supervisors of Mathematics (NCSM).  We started with their mission statement, which reads:

“NCSM envisions a professional and diverse learning community of educational leaders that ensures every student in every classroom has access to effective mathematics teachers, relevant curricula, culturally responsive pedagogy, and current technology.”

One of the items contained in the mission statement was the continuing liberal theme of  “equity”.

“Motivate mathematics leaders to maintain a life-long commitment to provide EQUITY and access for all learners.”

We had to look up “pedagogy” as it was a totally unfamiliar term.  Pedagogy simply means the art, science, or profession of teaching.  Digging a little further we found a description of modern pedagogy:

“Modern pedagogy has been strongly influenced by the cognitivism of Piaget, 1926, 1936/1975; the social-interactionist theories of Bruner, 1960, 1966, 1971, 1986; and the social and cultural theories of Vygotsky, 1962. These theorists have laid a foundation for pedagogy where sequential development of individual mental processes, such as recognize, recall, analyze, reflect, apply, create, understand, and evaluate, are scaffolded. Students learn as they internalize the procedures, organization, and structures encountered in social contexts as their own schema.” [brainwashing]

The words that caught our eye in the above Karl Marx-inspired mission statement and the definition of modern “pedagogy” are “social interactionist theories”, “social and cultural theories” , “social contexts” and “equity.”  The words “social” and “equity” are recurrent themes in everything we read about Common Core State Standards.  These words come right out of United Nations policies, parroted by liberals and you won’t find them in the U. S. Constitution.

Hidden deep within all this “mush” is covert pandering to Blacks, Latinos and the LGBTQ community who evidently have trouble keeping up, or don’t fit in well due to significant cultural differences.  This “social-equity” plan is to bring everyone down to the lowest common denominator, lowering overall achievement standards.  Could this be why American education ranks fourteenth out of forty countries?

It is obvious to an objective reader that public education has become socialist indoctrination, not what we used to know as reading, writing and arithmetic.  If you are wondering why the kids of today lean heavily in a socialist direction, one never needs to go any farther than what they are learning in our public education system.  It is no wonder that so many parents are choosing private schools for their children these days, if they can afford it.

DO YOU STILL WANT TO SEND YOUR KIDS TO PUBLIC SCHOOLS?

If you are wondering why almost the entire 4th estate (journalism) has succumbed to this socialist mantra and will do everything in its power to stifle any other ideology, they are products of public school and college socialist indoctrination.  If you wonder how the Deep State got started, most government employees are graduates of our liberal colleges where greater and deeper socialist indoctrination takes place.

Older Americans over 70 know what is happening because they have a perspective that spans the major socialist shift in public education.  One fairly astute old timer responded to one of our articles with this:

“I am an 80-year old farmer.  I have a B.A. degree in History.  I have been watching for many years America’s decline into Socialism but never dreamed in just one fraudulent election that America would be taken over by Communist style Socialists.”

“Shortly after the election and the immediate coronation by the national media of Joe Biden, I wrote a letter to my children and grandchildren that the ‘Bolsheviks will be coming for your land, your savings, your Constitution, and your Bill of Rights.’  The letter was answered with gratuitous responses that were intended to assure me that everything would be just fine because their Universities, NBC, and CBS told them so.”  [The result of public education socialist indoctrination]

“The average American citizen has no idea what plans are in store for them. They have given up their constitutional consent and sovereignty for the false narrative of collective egalitarianism. Your article was greatly appreciated but I’m afraid the American individual who values freedom is a relic of the past.  Our forefathers would never put up with what’s going on today in the streets, the courts, or in the halls of Congress.”

“Many argue that an election was stolen but I submit that in doing so the left has stolen our Republic. The only true America is the America in my memory as a young man.  Alexis  de Tocqueville warned us, ‘The American Republic will endure until the day Congress discovers that it can bribe the public with the public’s money’”  Thomas Sowell has written that if Biden/Harris are elected America will have crossed a line of no return.”  [Sowell could very well be right]

“My only regret is that I am now too old to do anything about it.”

Millions of American old timers feel just like this one does but they are too old to get involved, or unable to articulate their concerns in one form or another.  It is up to the young ones to save liberty, but the young ones have been brainwashed in a public education system that was pre-programmed to kill a free nation in just a few generations ….. by socialist Democrats.

If there is an answer to this national dilemma, it may be contained in the truly American story of Athens, TN.  The fraudulent election of 2020 is reminiscent of what occurred in Athens, TN on August 1st, 1946.