Home/December 2017, Opinions/To Resign With A Slap On The Hand Is NOT Enough! Prosecution Must Commence

To Resign With A Slap On The Hand Is NOT Enough! Prosecution Must Commence

“Regardless of what branch of government, office or party affiliation, the law applies to each and every one of us!”

We all must keep in scope that the purpose of government is to “restrain men from sin” (breaking the law), enforce God’s standard of “right and wrong” and to “maintain order.”  Knowing this, how does one accept what is happening in American Government in the present?

Recently, Al Franken (D-MN) simply chose to resign after being accused of inappropriately touching multiple women before and after he was a senator and photos are easily accessible.  An Ethics Committee investigation was already underway. 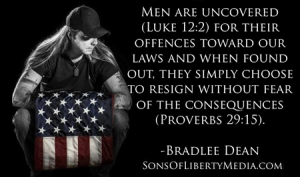 Conyers, who represented the Detroit area for 52 years, yielded to mounting pressure from representatives to step aside as a growing number of female former aides accused him of unwanted advances and mistreatment. He has denied wrongdoing.

Arizona Republican Rep. Trent Franks announced in a statement Thursday night that he will simply resign from Congress at the end of January, after the House Ethics Committee said it would investigate allegations against him of sexual harassment.

Wow, they are uncovered (Luke 12:2) for their offences toward our laws and when found out, they simply choose to resign without fear of the consequences (Proverbs 29:15).

A mere slap on the hand is a signal of encouragement to the next violator of law in line to do the same in their criminal endeavors (Luke 22:48).

The last to resign amid a scandal was Sen. John Ensign (R-NV), in 2011, who quit during an investigation by the Ethics Committee into his affair with a former campaign staffer who was married to a Senate staffer.

Before that, Sen. Robert Packwood (R-OR) resigned after being recommended for expulsion amid accusations of sexual abuse in 1995.

Going even further back, Sen. Harrison Williams D-NJ) resigned in 1982 after being recommended for expulsion after a bribery conviction. This list of criminals is only the tip of the iceberg.

Here is a list of federal politicians convicted of crimes!

Where have the American people accepted the notion that public servants, who have been placed into public trust and have transgressed American laws, must simply resign after their criminal violations rather than face justice as to the laws they broke, as if to suggest that this will somehow appease the crime?  It only encourages more crime.

There is a higher trust placed in the individual that serves “We the People.”

Therefore, if they violate that trust by breaking the law, then there is a higher consequence that they must pay for their transgressions.

The President, Vice President and all civil officers of the United States, shall be removed from office on impeachment for, and conviction of, treason, bribery, or other high crimes and misdemeanors. – Article 2, Section 4 US Constitution

Asking them to resign is like hiring a banker that turns out to be a bank robber, and then after their crimes are discovered, you ask the bank robber to simply return the money and go find another job. He will merely go to another bank and then repeat the crime all over again.

You do not ask for a resignation.  You fire him and call the police and have them prosecuted to the fullest extent of the law for the crimes committed. We should be deterring the crime, not encouraging it (Proverbs 16:6).

Americans need to understand that where justice is left off, it will create repeat offenders and so it has and will continue to do so unless the remedy is applied (Isaiah 26:9).

If this is not done, it will destroy this country, regardless of wh0 the guilty party is, for Justice guards American liberties (Isaiah 51:4).