To Russia With Love, Part 2

What Is The Russian NeuroWeb and Why Should Americans Worry About Russia, Facebook, and the Future of Education and Machine Learning?

The deep ties of US tech companies to Russia’s SkolKovo indicate there are far more problems than cybersecurity. At issue seems to be preparations for a futuristic world society. But, preparing the world for what? It all has to do with education, machine intelligence and big data.

Neural interfaces are engineered devices designed to exchange information with the nervous system. Brain-targeted teaching using a brain-machine interface (BMI) can be described as a direct communication pathway between an enhanced or wired brain and an external device.  This is definitely a controversial issue. 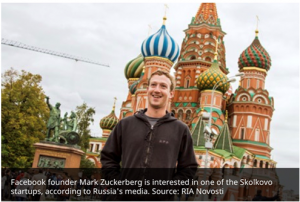 The Invisible Empire Made Up of Men of Evil Genius.

Facebook’s founder Marc Zuckerberg visited Moscow in 2012 with the purpose of skimming Russian talent from SkolKovo to the United States. Russians feared that there would be a brain-drain of scientists flocking to America. (Source🙂 There had been a conspiracy theory floating around about Zuckerberg’s Facebook being originally funded by the CIA to gather personal data on millions of people for the U.S. government. Well, if that’s true, with the added technology of Russian neural-brain interfacing along with his DARPA executive, there is much more on his plate than mere Facebook likes and dislikes. (Source🙂

In April of 2017 Zuckerberg unveiled Facebook’s augmented reality system – and confirmed rumors the firm is developing a ‘mind control’ brain interface. Zuckerberg took to the stage at the firm’s annual F8 developer conference at the San Jose McEnery Convention Center. The mysterious Menlo Park “Building 8”, headed by former Defense Advanced Research Projects Agency (DARPA) chief and Google executive Regina Dugan, signed agreements with 17 universities, including Stanford, Harvard and MIT, to speed up progress on new research projects, and will be paid a fee by Facebook. ‘Building 8’ is working on mind-reading technology hiring ‘brain-computer interface engineers’ to develop advanced BCI technologies applying ‘machine learning methods’, including encoding and decoding models, to neuroimaging and electrophysiological data. What does Zuckerberg have in mind? (No pun intended.)

Who Is Pavel Luksha?

Extensive research being done by Russian SkolKovo scientist Pavel Luksha and his team is a key to expanding these neurological brain interfaces and a universal system of coding. The NeuroWeb (Source🙂 agenda for the entire universe compiled by Pavel Luksha creates a preliminary futuristic roadmap for the Global Education Future in the year 2035. Pavel Luksha aligns his NeuroWeb toward a global/neuroscience architecture for education. “Scary” doesn’t even come close to describing Pavel’s future road map.

Education is the focus of this “game changer” for “reengineering” the future according to Russian scientist Luksha. Preparing nations for this change includes technological/neural/brain transmitters which will upload our thoughts and feelings into the cloud. This seems like fantasy.

However, we must ask ourselves why the trend of personality/psychological development is currently blended into classrooms of America, called soft skills standards and non-cognitive interventions. Is this why leaders want to de-emphasize the teaching of traditional academic knowledge? These psych techniques have already been legislated in the new education law in the US, called ESSA, Every Student Succeeds Act. Think about the specific “synchronized” standards (Common Core, affective standards, and computerized data elements via state longitudinal data systems replicated in 50 states) that could be transferred via BMI and analyzed by big data. It would not be difficult to standardize the entire educational system for both machine learning and personality development. That becomes more worrisome. Russia’s involvement with this global prototype means trouble. Who controls those standards and what are the objectives?

Was Common Core and all the psych programs legislated in ESSA, such as multi-tiered systems of support and positive behavior interventions, a prelude to “cleaning the slate”? Is this preparing American children to accept a more flexible world view? Luksha’s “rapid foresight” future map, through conditioning and changing human behavior via machine learning processes, seem to be exactly the goals of these futurists. Note this important fact: Changing the values of American children away from the old Industrial Age to that of a total digital world means calling for the end of the Gutenberg Era (with the invention of the printing press) of written media and its impact on society. This will leave old-fashioned parents and citizens totally behind.

The Russian Dual System of Work

Are big US tech investors in neural brain research designing a dual education system like that of the Russians – one for World Skills training, and another for kids with more “talent”? Will this two-track system be incorporated into personalized education plans for the future? Both Workforce Innovation and Opportunity Act and Every Student Succeeds Act work hand-in-hand as the legislation groundwork to create a diagnostic individual pathway moving the U.S. towards a dual work system. Thus, is this a different motive for GRIT research by University of Penn psychologist Angela Duckworth? Russian Pavel Luksha suggests a separation for educating the masses – those who are motivated, and those who are NOT motivated — leaders and followers. This suggests a Russian dual education system. His team of researchers focuses on why birds flock, why fish school, or why ants work together. The BRIC countries are all on board – Brazil, Russia, India, and China. (Source🙂

Basically Luksha’s “collective intelligence” comprises one leader and many followers in each instance. The difference is that leaders (kids with talent) are educated differently than the followers, skilled workers. The programmed individual pathway is controlled in this environment.

It is not a wild stretch of imagination to consolidate this type of schooling process. These controversial pilots are already in motion:

We should ask if Zuckerberg’s foiled quest to give the Internet to the entire world had bigger intentions than philanthropy, especially when he advanced his plans to put a satellite above Africa. “SpaceX’s launch failure destroyed our satellite that would have provided connectivity to so many entrepreneurs and everyone else across the continent,” as Zuckerberg strikes a bitter tone to the explosion that destroyed the internet.org satellite. The larger view from space would allow expanded Zuckerberg-funded services but with added data-mongering. (Source🙂

But not everyone is on the same page. Zuckerberg and Bill Gates may be learning that not everyone is going to agree to their agenda when last year “the Ugandan government ordered the closure of 60 schools – part of a network [Bridge International Academies] providing highly scripted, low-cost education in Africa – amid allegations that they had been “teaching pornography” and “conveying the gospel of homosexuality” in sex-ed classes. (Sources:, Source-1, Source-2, and Source-3)

What could possibly go wrong with free Internet for the world?