To Russia, With Love, Part 3

The World According to Luksha and Why Are Soviets Re-Engineering the Future?

In a dual education system, who determines who will be “educated” and those who will only be taught “functional literacy” in vocational services? The 1992 U.S. Department of Labor controversial SCANS Report, advocating controlling future “human capital” as each person’s assigned worth or 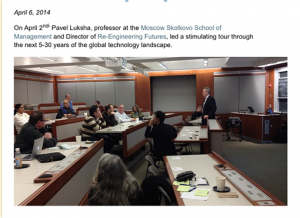 worthlessness to the economy, is coming to fruition. Luksha describes the new global digital world to MIT observers in the following links: (Source-1) and (Source-2)

At the GEFF conference (Global Education Futures Forum) held in Menlo Park, CA in April of 2015 Luksha explained in detail what he has to offer the world as far as what the future in education would look like in the year 2035. The key to accomplishing longterm economic goals, education and technology were the main focus. The following links to this roadmap explore their ideas. (Source-1) and (Source-2) and (Source-3)

Many goals , I’m sure, will not be so easily accomplished in America. In fact their “future map” shows that there are many ethical and legal questions that have not been thoroughly thought out to become a reality in the land of the free. However, the push for global “deliberative democracy” is moving forward unhampered and unquestioned.

But one very important issue for the world to understand when looking at this plan is that these secular-humanist scientists scour and scrub the world to make it free of religion, or to make it a more accepting world religion with flexible morality and worldviews. They quote Karen Armstrong speaking at a TED talk about the community helping to build a “Charter for Compassion — to restore the Golden Rule as the central global religious doctrine.” 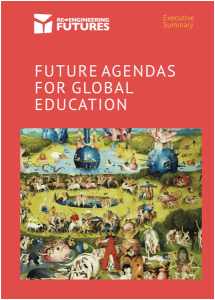 Values are to be taught by online virtual game apps that form common values, not churches. Child labor laws would have to be changed for the Mickey Mouse Club Law, legislation introduced for early intellectual labor, 10 years old and up. A Billion Student University emerges with IT companies consuming the roll as the leaders of the Global Education Market, not universities. The definition of a new “modernist family” will need “competent” parenting training, and a shift in the childhood model to a more flexible morality. This includes opening the door at a younger biological age to an ever expanding range of activities (education, business and political activities, sexual activity, right to access pharmacological “cognitive intensifiers,” etc. Well, are we ready for this? Does the Luksha agenda normalize all sexual activity like pedophilia, transgenderism, sexual predators, and homosexuality? Is there such a thing as a child’s consent to sexual activity?

(NOTE: The following link provided is a must read for the entire concept of Russian Futurist plans for America and the world.

The new family and a shift in the childhood model, page 60.

The extent of what the controlling factors are, and of which values gets implanted and who decides what that information will contain, will totally be controlled by top technology companies. This will curtail free and open sources of knowledge or scholars. We should question WHO is writing and analyzing the algorithms, and WHAT values and WHAT curriculum WILL be taught? Turning Western civilization on its head will ultimately convert moral, social, and aesthetic values to a more transformational acceptance of what is right/wrong, good/bad, or beautiful/ugly.  Western society will be scrubbed of social norms, ethical values, traditional customs, belief systems, or a moral compass. Sin is erased. I’m OK, you’re OK, or what kids say today…whatever!

What Does the Future Hold?

Elon Musk of TESLA is preparing to link human brains with computers in 4 years. “Artificial intelligence and machine learning will create computers so sophisticated and godlike that humans will need to implant ‘neural laces’ in their brains to keep up,” Musk said last year. Over the top? Maybe. (Source)

Bryan Johnson, the founder and CEO of neuroscience startup Kernel, is trying to hack the human brain. And Facebook investor Yury Milner envisions a global brain with collective intelligence. The Matrix may not be too far away. (Source)

It is all very clear. The real coverup concerns the intel from Russia that is being used by US tech companies. The future of our education would be intertwined with neural brain research. The Alife agenda (artificial life) will control human behavior and what information would be fed through the cloud-based Internet of things. Cathy O’Neil, Harvard Ph.D. warns of big data’s dark side in ‘Weapons of Math Destruction’ states overtly, “Don’t Trust That Algorithm?” (Source)

However, this is a warning: Whoever compiles the algorithms, (Google, Intel, Facebook, Tesla, Microsoft, Cisco) will decide what the standards will be and what information will be available to “download” into your brain. After all, an algorithm is an opinion, and the opinion of developers will determine the standard of what will be taught by machine learning, and what information will be provided and shared. Education becomes selective, conditioned, and discriminating in this new world order. (More on Algorithms in Part 4.)

This brief overview gives you the importance of understanding this controlled universal collective intelligence drafting the pathway to digital globalization brought to you by Hillary Clinton, Zuckerberg, and their Russian cohort, and other SkolKovo friends, like Pavel Luksha. This is a closer look at the Global Future Agenda of  transhumanism. Please read the entire synopsis of what the future will bring in the techno-religiousity, immoral future that is being portrayed merging humanity with technology while destroying the family. [Link]