To Russia, With Love, Part 4

Artificial Smartness: Computers Don’t  Remember Anything On Their Own.

Russian Influence? Who Controls What Gets Taught on Software in American Schools? Who Designs The Algorithms? Who’s Data Mining?

Machine learning was behavioral psychologist BF Skinner’s idea of learning machines, operant conditioning, and controlling behavior targeted toward a desired outcome. The Russians use gamification, or learn by playing, everything is done through a video game or app. You can think of a competency based Skinnerian process and synchronization of Common Core, combining the standards to the process, so that brains can be rewired by intertwining the two in video games. Let’s see how many parents volunteer their child for this experiment… or have parents been bypassed?

The Obama Executive Order 12866 that changed FERPA, Family Education Rights in Privacy Act, now allows personally identifiable data to be shared, data mined, and researched with almost anyone who wants the data…for free…without parental consent. Pennsylvania parents had exposed this agenda when I had researched state contracts and demanded the Governor place a moratorium on data mining Pennsylvania’s children. (Source🙂

The written agreements with 3rd party vendors to access your child’s data is huge. Your kids are a commodity and researched constantly, as exposed by an EdWeek article about Carnegie Mellon University’s Learn Sphere. Data mining, biometric analysis, and research on students without parental knowledge and consent may be violating privacy laws. (Source: http://blogs.edweek.org/edweek/DigitalEducation/2014/10/data-mining_research_privacy_NSF.html )

[Learn Sphere] “…may also include information on what Koedinger described as students’ “affective emotional states,” such as whether they are bored or frustrated, as gauged through either classroom observations or sensor technology that can detect an individual’s posture, their skin’s conductance of electricity, and more.”

“We’re increasingly operating outside the parameters of FERPA,” she said, referring to the Family Educational Rights and Privacy Act, a 40-year old federal statute that remains the primary law in place to protect students’ privacy.

“We talk about modern privacy as being about an individual’s right to control the information they’ve entrusted to others,” Barnes said, “but it appears [with LearnSphere] that students will lose significant control.”

Who qualifies as 3rd party vendors (SkolKovo, Carnegie Mellon, Facebook, MIT?) to have access to our children’s personally identifiable information? Parents must understand the imposing future of education. It’s not school anymore. It is pure surveillance, spying, and conditioning. We have proven that it is happening. But, are parents asking why? Do parents think these techniques are simply going to go away? Or do they think their child will not be affected by the bombardment of brain research?

So what should parents be thinking about Neural-brain software? We know that the US Army Research Laboratory designed an Adaptive Intelligent Tutoring Software and Instructional Management system with affective interventions to change personalities; i.e., the beliefs, attitudes, values, and dispositions of students. (Source)  We also know that software is continuing to be commercialized to move forward.

Why are our children’s emotions being regulated? Isn’t it OK to disagree with what is on your computer screen? Is that deemed a negative response? Because you disagree will your attitude be modified? Because it can be done, should it be done? What are the results? Who were the first guinea pigs? Where was the experimental research done? Bottom line, our children are NOT protected from the experimental brainwashing.

All About Algorithms and more….

Machine intelligence is “moulding itself around us by constantly mining and analyzing our data and then responding with automated suggestions, recommendations and micro-nudges toward certain kinds of behaviours and actions.”

“Yet, the role of big data in machine intelligence adds another level of complexity because “computers don’t remember anything on their own.” Rather than a neutral and unbiased product of computational processes and algorithms, big data is actually the product of many human hands, values, assumptions, and ways of thinking about the world, many of them held by the computing and data science specialists who have programmed the technologies and designed the methods and algorithms to collect and analyze the data.” (Emp. added) (Source) 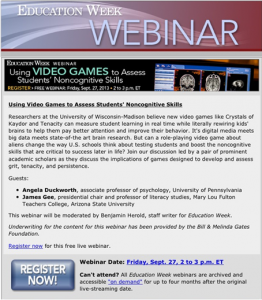 So the content of many video games and computerized curricula may not be what parents think. What are children learning and how do you define what SUCCESS means in the future? This Webinar held by EdWeek, financed by the Bill and Melinda Gates Foundation and “grit” psychologist Angela Duckworth, gives you a real look at what the objectives are. Who is defining what grit and character really is? What is the significance when the objective is to separate the motivated from the unmotivated as Luksha describes?

“So, when we hear that big data is the tutor of machine intelligence, we need to query not just the machinery itself, but all of the human systems of thinking, values, assumptions and so on that have gone into the production of the data informing it. As a recent book entitled “Machine Intelligence“ claims, the creation of “smarter-than-human AI” requires a massive “encoding of the entire system of human values for an AI: explaining them to a mind that is alien to us.” This would represent a monumentally complex pedagogical task of training machines to do what we want them to do and to share our values. As a result, questions about how machine intelligence, deep-learning algorithms, cognitive learning systems and artificial smartness are taught, and of who or what teaches them, using what methods, data and materials, and according to what educational theories, may become significant as cerebral schools develop in which such technologies are routinely deployed to interact with students.”

“How will human brains likely to be shaped and reshaped through interaction with such computationally brainy spaces at school? How we think and learn is partly becoming an issue of how machines have been taught to ‘think’ and learn, based on notions of the human brain itself as a big data-processor.” (Emp. added.)  (Source:)

Understanding how others vision our future, including Hillary, Zuckerberg, Gates, and Luksha, we must look closely at what is being fed to our children on a daily basis with machine learning and values/gaming brain changers.

The Sovietization of our schools might be sooner than you think. (Sources: Historical Record: Soviets in the Classroom, Edu-Gate; Charlotte Iserbyt.