Skip to content
Home/April 2021, Opinions/To Stop Mob Violence You Must Crush It!

To Stop Mob Violence You Must Crush It!

“What has violence ever accomplished? What has it ever created?  No martyr’s cause has ever been stilled by an assassin’s bullet.  No wrongs have ever been righted by riots and civil disorders.  A sniper is only a coward, not a hero; and an uncontrolled or uncontrollable mob is only the voice of madness, not the voice of the people.”   —Robert Kennedy

“The student who invades an administration building, roughs up a dean, rifles the files and issues ‘non-negotiable demands’ may have some of his demands met by a permissive university administration. But the greater his ‘victory’ the more he will have undermined the security of his own rights.”   —Richard M. Nixon

Every parent instinctively knows, or should know, that if a young child acts out, becomes violent, belligerent, or disrespectful, some form of discipline is in order.  And the discipline has to be the kind that gets the message across.  If no discipline is applied or if the discipline is not sufficient, the child will continue his or her behavior and that behavior will only get worse over time.    That’s the child that ends up committing crimes because he or she still believes that there are no consequences for his or her actions.  He or she then becomes a line item on a police rap sheet, or shot by police on the streets, black or white.  The fact is criminals are made from life’s negative experiences, not born.   (See: “Little Black Box Theory”) 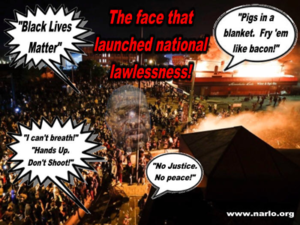 Males, especially young males, are the worst offenders of crime.  Females constitute less than 20% of arrests for most crime categories.  (Source: Gender and Crime, www.law.jrank.org)

But what makes the criminal in the mob that will riot, loot, burn and kill?  One source describes it this way:

“When a group of people has assembled because they’re emotional and angry about something, it only takes one act of violence to whip the crowd into a fury. Others will follow the initial rioter’s lead and begin destroying property or hurting people. A lot of research has been conducted into the mindset of a violent mob. Being part of a group can destroy people’s inhibitions, making them do things they’d never otherwise do. They lose their individual values and principles and adopt the group’s principles, which, during a riot, are usually to cause destruction and avoid detection.  Being in the midst of a mob can be exciting and powerful, and it can make people feel invisible — they are part of a huge group, and they won’t be detected or held responsible for their actions.”

However, in this day of cameras everywhere, picking out individuals from photos and videos in a rioting mob aren’t that difficult, especially during daytime hours.  Just ask the over 400 individuals that have been arrested and sit in jail for their participation in the January 6th occupation of the U. S. Capitol Building.

In contrast, more than 10,000 people have been arrested for the rioting, burning and looting in 140 cities around the country since the death of George Floyd at the hands of a police officer in Minneapolis on May 25th, 2020.  We were unable to determine how many arrested were actually prosecuted for their crimes and served or are serving time in prison.  Many prosecutors refuse to prosecute the rioters and let them go free.  Not so the Capitol occupiers.

What prosecutors are not doing with regard to the rioters, looters and arsonists is called permissiveness.   Mohammed Reza Pahlavi, the son of the last shah of Iran, used permissiveness in his description of where Western civilization is headed:  “Growing terrorism, permissive societies, democracy collapsing through lack of law and order.  If things continue on their present track, the disintegration of Western societies will occur much sooner than you think under the hammer blows of fascism and communism.  Freedom is not something that does not have a breaking point, and your enemies would like you to reach that point.”

In the last year, not only is crime on the rise because of the demeaning, decimation and de-funding of police departments in many of the major cities, we must endure constant protests, rioting, looting and burning in our down town areas by hard-core revolutionaries.  The mobs are growing in number, influence and power.  They mean to tear down our constitutional system of government, our culture and our way of life by violence and intimidation.  They mean to destroy the love and bonding of families, the very esssence of our existence.   Because of citizen apathy and police looking the other way, it’s working.

An article by the Three Percent Organization gave us a glimpse into what we can expect from these revolutionaries:

In one of the rallies that were held across the country, a young activist speaking at Black Lives Matter Plaza in Washington D.C. made it clear that there will be hell to pay for white America and issued a call for what sounded like a violent revolution.

According to the 21-year-old who was identified as Rahim B; “How much longer can we protest and march in the streets before we are ready, really ready, to get blood on our hands because one of these days, it’s going to have to come to that.”

Rahim B. also encouraged the looting which after going unpunished last year will be even worse this time around; “I don’t condemn who loot, I support them for looting. I support people who take matters in their own hands. If you want to set something on fire, go do that.”

Earlier in the week, BLM activist and prolific tweeter Bree Newsome defended rioting and looting to her followers; “I’m definitely in the camp of defending rioting & looting as a legitimate, politically-informed response to state violence,” she tweeted.

What is the mob’s rationale for doing all this rioting, looting and burning, the false flag of systemic racism, handed to them on a platter by socialist Democrat politicians, social media and the news media?  They have whipped Blacks up into an out-of-control frenzy.  Critical Race Theory, now taught in our schools as reverse racism against Whites, is part of their strategy.  In addition to violence, socialism policies and radical environmentalism are their legislative levers to effect the changes.

NOTE:  Most Blacks shot by white cops have a significant criminal history, or on drugs, resisted arrest, or endangered the lives of the cops or the general public.  The Black population in U. S. prisons is double any other race and more than five times the White population.  That disparity cannot be explained by racism.  Is it any wonder that cops, White or Black, encounter Blacks more frequently?

Like naughty children who have never been disciplined, these revolutionaries intend to keep up the violence until the politicians and the scared people, quivering with fear in their homes and businesses, capitulate and give into the revolutionary’s demands.

One of those demands was that Police Officer Chauvin must be found guilty on three counts for the murder of George Floyd.  If it wasn’t a guilty clean sweep the mob was going to take to the streets again in violent protest.  These nut cases resorted to open threats, witness tampering and jury intimidation to get their way.  Even the President, Vice President and Representative Maxine Waters got into the act during the trial, trying to influence the jury.  The issues for appeal are numerous.  The story of this police officer is hardly over and he could still get off with a mistrial.  Is he guilty?  Maybe but due to other evidence, not absolutely!

The upshot of all this is that the political violence will continue until someone crushes the rioters.  Without the National Guard, the local police can’t seem to control the violence.  Thrusting the National Guard into the mix will bring about order but won’t solve the national problem or the false issues causing the violence.  Since the mob revolutionaries don’t suffer any major consequences for their actions, they are free to do whatever they like while the rest of us must endure the aftermath of looted stores, burned out buildings, lost jobs and lost business revenue.

When law enforcement cannot restore order and stop the violence that only leaves the people to stop it in what could be a massive outbreak of vigilante justice.  But the people are cowed in the corner like wounded rats and won’t lift a finger to save them selves.  And not just save them selves from rioters, looters and arsonists, but won’t lift a finger to restore the freedoms they have lost due to long-term government corruption and tyranny.  Government didn’t become corrupt overnight.  Government is corruption.

Any normal, reasonable and prudent person knows that the only appropriate response to uncontrollable violence is an equal or greater force.  But Americans have grown so civilized they shy away from confrontation and allow Goliath to slew the masses as it were.  Where is David with his magic slingshot?

The solution to the current rioting, looting and burning by those who would destroy us from within is much more simple than most people realize.  Even though we don’t condone or advocate for violence, if every shop owner in the free fire zone owned a pump shotgun and was willing to use it, they could bring the looting and arson to an immediate halt.  If just one or two of these lowlife’s were blown away in the process of committing their crimes of looting and burning, the rest would scatter like flies.  If they believed that all shop and business owners were so armed, they wouldn’t come back.

This would also apply to the southern border as well.  If the border were say patrolled by A-10 Thunderbolts, or an AH 64E Apache Helicopter, or a Lockheed AC-130 gun ship and they were to fire warning shots at the illegal aliens as they attempted to cross the border, the aliens would turn tail and run as fast as possible back to their home countries.

Some of you will instantly say this is inhumane.  It doesn’t comport with America’s values.  But if a show of force produced a huge reduction in human, drug and sex trafficking, that would be even more humane.  It would stop the illegal aliens from making the over 1,000 mile journey to America where they endure all kinds of inhumane treatment along the way, like beatings, theft, rape and sodomy at the hands of the brutal cartels, along with the extortion money they must pay to the cartels.

As we have said many times in our articles, “If you don’t confront the bully with equal or a greater force, the bully owns you.”  The socialist Democrats and the mob now own you.  Their power over you grows by the day under the Biden Administration.  If you have the courage, you can fight back peacefully with “The Mandate” before revolution or civil war become the only remaining alternative.