Home/May 2022, Opinions/To the Ends of the Earth: Lost White Migrations and Civilizations, Part 1

To the Ends of the Earth: Lost White Migrations and Civilizations, Part 1

In addition to the great Caucasian* or Aryan Indo-European migrations [*hereinafter called Whites], there were many waves of migration of various groups of Whites over the millennia in pre-history continuing until recently. These Whites were generally more advanced technologically than other contemporary groups they encountered, but that term does not necessarily mean “materialistic” as it is used in the current sense. In many instances, these Whites established impressive cities containing unique structures like pyramids and obelisks and were the product of massive architecture employing stones weighing upwards of 100 tons despite there not being any heavy machinery as we know it today. Often such buildings had special religious significance and were the product of the development of advanced sciences employing techniques and knowledge much of which has been lost to history.

Actually, and in many cases, the farther back one goes, the more advanced are the cultures that are unearthed, contradicting the continuous advancement paradigm that undergirds the Darwinian and other establishment concepts of continuous human progress over hundreds of thousands of years. Today, these “gaps” are often explained through the claim of alien assistance to our primitive forbears. Those involved in such speculation are routinely described as “Ancient Astronaut Theorists” and it would seem that much of which we cannot make sense today within the limitations imposed by the “Darwinian concept” of history is routinely “explained away” by theories that are more “far-fetched” than the possibility that maybe Darwin was wrong after all!

Many of these discoveries have been unearthed in the last 50 years or so. As we have seen time and again ad nauseum, the Whites responsible for the advanced cultures that have been recently discovered exterminated themselves through miscegenation, being overcome by alliances of hostile neighbors, or by revolts of those non-whites who comprised the lower classes or castes of their societies. Whites were blamed for the conditions leading to the revolts although such conditions were seldom their fault and often remained after White rulers were deposed. However, historically speaking, “blame whitey” continues to be the name of the game when it comes to our present view of “history,” and something now analogous to the current claim of “white privilege” is blamed for the lack of advancement of non-whites who are themselves primarily responsible for their condition.

As noted above, those conditions leading to the overthrow of established (White) governments were often natural in origin. Disasters such as droughts and other climactic changes or geological conditions such as volcanic activity were frequently the catalyst that instigated the overthrow of human societies while wars and revolts caused migrations of peoples all over the landscape. These major upsets in the status quo caused the loss of many of the advancements these societies had previously attained. The aforesaid recent discoveries made in the Americas, China, the Canary islands, and other scattered geographical locations have testified to this causality.

One of the most famous eastern migrations of the Celtic peoples, a branch of the White race, resulted in their arrival at the Takla Makan desert in Western China before 1,500 BC. This migration was unknown until the discovery in 1977 of the graves of these “European” people dating back 3,500 years. As a result of the extreme dryness of the area – a necessity for the preservation of the dead – many of the corpses are almost perfectly preserved and exhibited undeniable White racial traits including reddish-blond hair, long noses, round eyes, and finely woven tartan clothing associated with Celts, both the Irish and the Scots. These lost Whites are called “Tocharians.” The Chinese have preserved stories of blue-eyed, blond-haired leaders who were the originators of Buddhism and the organizers of Chinese society. Ruins of great Tocharian cities lined the famous Silk Road that they, and not the Chinese built to facilitate trade. The Tocharians had their own special language, and their cities had temples as well as centers of learning and great art. These impressive ruins lie undisturbed.

Indeed, there are many archeological sites around the world that similarly lie unstudied because it is feared that these would uncover the massive white accomplishments of times past and as that is not in keeping with our present New World Order agenda, their excavations are not funded by leftist foundations and governments. The limited excavations accomplished in “Tocharia” (my term as their empire hasn’t even been given a name!) have “uncovered” fully clothed bodies wearing finely woven woolen textiles with Celtic patterns, leather shoes, and jewelry. The desert conditions are so exceptional that even pieces of bread have been preserved alongside what is acknowledged to be the world’s oldest saddle. By the 1990s, over 1,000 such corpses had been uncovered. Then the Chinese Government halted further archeological digs in the area, for fear of giving the ancient Whites too much credit for developing Chinese civilization. However, by then some of the uncovered mummies had been placed on display in local museums where they remain today while others lie decaying in storerooms. An extensive literature already exists on the relatively unknown, but highly civilized Tocharians.

The perfectly preserved mummy known as the Sleeping Beauty of Loulan, one of 200 mummies found in the Western Deserts of Xinjiang, China. Though they eternally sleep, their startling looks are a source of mystery and controversy. These mummies show the diversity of ethnicity in the area, where the Uyghur people of the region still dispute ancient ownership with the ruling Chinese. The Loulan Beauty died on the Silk Road, at a time when it was firmly believed no Caucasians had ever ventured that far. But she is clearly Caucasian, with her high cheekbones, high bridged nose and blonde hair. She died sometime in her 40s, and is still dressed in her red robes, her hair crisply braided in what was probably a very fashionable style 3800 years ago. In fact, for 3800 years old, she is remarkably well preserved. She was and is indeed a beauty, tall and stately, with finely carved features.

Ancient White influence was, however, not restricted to western China. A genetic study published in the journal, “Molecular Biology and Evolution” (Vol.17, pages 1396-1400, in the year 2000) found that in the far eastern seaboard Chinese province of Shandong, the

population of former times showed greater genetic similarity to present-day Europeans than to present day Asians. The report conclusively showed that Ancient Europeans had penetrated China right to the Pacific Ocean and that legends that maintain that the first Chinese emperors who brought unity and civilization to China had fair hair and blue eyes may have a basis in fact. With the passage of time, these white people mixed with the Mongolid people (the name of the race that includes the Chinese, Japanese, Eskimos etc.) surrounding them and were eventually absorbed into them. But the physical features of the people living in the Shandong area clearly show White genetic 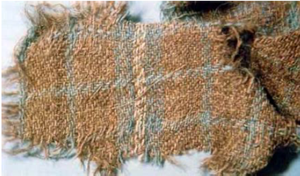 Above is further proof of the White/Celtic origin of the Tocharian people including mummies and fabric showing the well known patterns known as “tartans” so familiar to us in both Scotland and Ireland: