Despite the seriousness and illegality of the entire Hillary Clinton Email Server scandal that endangered the lives of Americans — many of whom are fearful of Russian and Chinese cyber espionage and indiscriminate Internet hacking of classified material — the news media and the Democratic Party’s top officeholders were too busy pushing their anti-Trump agenda to report to the American people the contents of yet another “document dump.”

A well-known, well-respected Inside the Beltway watchdog this week promulgated the transcript of a federal court-ordered interview of Jacob “Jake” Sullivan, who served in the State Department as Hillary Clinton’s senior adviser and deputy chief of staff when she was secretary of state. During the course of the sworn statements of Sullivan, he admitted under oath that he and Clinton used her unsecured, unauthorized non-government email system to conduct official State Department business including material that was classified “top security.”

The Judicial Watch’s court-ordered discovery centered upon whether Clinton intentionally attempted to evade the Freedom of Information Act (FOIA) by using a non-government email system and whether the State Department adequately searched for records responsive to Judicial Watch’s FOIA request.

While still serving as Secretary of State, Hillary Rodham Clinton’s staff were involved in “hanky panky” as part of damage control for their boss prior to her appearance before lawmakers investigating the Benghazi terrorist attack that occurred on Sept. 11, 2012. They were instructed to set aside any documents that would hurt Clinton politically and not turn them over to the Accountability Review Board (ARB) that was investigating the alleged missteps by the Obama administration especially those by the State Department, according a report on Monday by former CBS News correspondent Sharyl Attkisson. 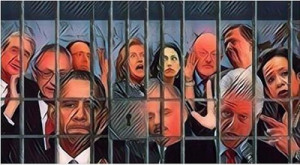 At the same time that Hillary Clinton and her husband Bill were hobnobbing with Democrats in Iowa on Sunday, a former Clinton assistant, Ray Maxwell revealed to reporters that State Department cronies beholding to Secretary Clinton were instructed to sift through documents in a “secret” operation conducted in the headquarters’ basement.

The goal was to exclude anything that might point to Clinton’s mismanagement of embassy security especially in nations that were involved in conflicts with radical Muslims such as Egypt, Iraq and Libya.

During Clinton’s tenure, Maxwell was a high-ranking deputy in the State Department’s Bureau of Near Eastern Affairs (NEA), which was ordered to collect any and all documents regarding the shocking Benghazi terrorist attack.

According to Maxwell, Hillary Clinton’s top assistant was  present during the after-hours document review. But Maxwell wasn’t assigned to help in the hanky panky occurring in the Sunday document caper, he said. Maxwell’s description of what he saw — boxes full of government documents — reminds many observers of Hillary Clinton’s days as a First Lady during the Whitewater investigation. That incident in 1996 created a controversy that was quickly dismissed by the news media that all but covered up the story of how the longtime missing documents were discovered in Hillary Clinton’s White House bedroom.

A video of the Sullivan deposition exists but is under seal after the Justice Department and State Department, which opposed any discovery, objected to their public release. The court denied release of the video depositions for now and left the door open for reconsideration.

“A federal court wants answers on the Clinton email scandal and Mr. Sullivan is one of many witnesses Judicial Watch will question under oath,” said Judicial Watch President Tom Fitton. “It is shameful that the Justice and State Departments continue to try to protect Hillary Clinton and the Obama administration on the email scandal.” 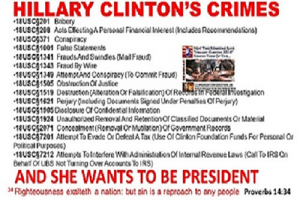 U.S District Court Judge Royce Lamberth ordered Obama administration senior State Department officials, lawyers, and Clinton aides, as well as E.W. Priestap, to be deposed or answer written questions under oath. The court ruled that the Clinton email system was “one of the gravest modern offenses to government transparency.”

Judicial Watch previously released interrogatory responses given under oath by E.W. (Bill) Priestap, assistant director of the FBI Counterintelligence Division, in which he stated that agency found Clinton email records in the Obama White House, specifically, the Executive Office of the President.

“She told me, ‘Ray, we are to go through these stacks and pull out anything that might put anybody in the [Near Eastern Affairs] front office or the seventh floor in a bad light,’” says Maxwell. He says “seventh floor” was State Department shorthand for then-Secretary of State Clinton and her principal advisers.

“I asked her, ‘But isn’t that unethical?’ She responded, ‘Ray, those are our orders.’ ”

In an interview Monday morning on Fox News, Rep. Jason Chaffetz, R-Utah, named the two Hillary Clinton confidants who allegedly were present: One was Cheryl Mills, Clinton’s chief of staff and a former White House counsel who defended President Bill Clinton during his impeachment trial. The other, Chaffetz said, was Deputy Chief of Staff Jake Sullivan, who previously worked on Hillary Clinton’s and then Barack Obama’s presidential campaigns.

“When Cheryl saw me, she snapped, ‘Who are you?’” Maxwell says. “Jake explained, ‘That’s Ray Maxwell, an NEA deputy assistant secretary.’ She conceded, ‘Well, OK.’”

A full transcript of the deposition is available here.