I also protect myself by being flexible, I never get too attached to one deal or one approach… I keep a lot of balls in the air, because most deals fall out, no matter how promising they seem at first.  –Donald J. Trump, The Art of the Deal

You have to be very rough and very tough with most contractors or they’ll take the shirt right off your back, –Trump wrote in the 1987 business classic, Art of the Deal

And maybe it’s just fine with Trump, because he is the master at the “Art of the Deal.”  But it is even finer with all of his supporters because there were far too many caveats in this Obamacare lite that none of his supporters liked.

The Art of the Deal

In Art of the Deal, Trump recalled a 1981 meeting with the attorney general and the head of gaming enforcement for New Jersey in which he threatened to walk away from Atlantic City, despite already making huge investments on the Boardwalk there, if he didn’t get certain concessions.  (The book is worth the read to understand our 45th President).

He described the situation, “Much as I wanted to build a great casino on the great site I’d assembled, I said, I have a very successful real estate business in New York, and I was more than willing to walk away from Atlantic City if the regulatory process proved to be too difficult or too time-consuming. The bottom line, I concluded, was that I didn’t intend to invest any more money, or to begin any construction, until I got a decision one way or the other on my licensing.”

Trump enjoyed telling us that this ploy worked. A process that normally dragged on for more than 18 months was completed within six.

He clearly hasn’t forgotten the lesson, and he needs to realize that the Conservative Caucus represents the grassroots folks who put him in our White House.

The Problem with Obamacare 2.0

Congressman Mo Brooks said he voted against Obamacare 2.0 “because it has more bad policy than any bill I have ever faced.  I simply cannot, and will not, vote for bad legislation that hurts so many Americans solely because Washington friends and colleagues ask me to.  While this bill has many major flaws, I emphasize just two.”

Read what Brooks said about this bill and the problems with it, and watch his Fox New interview.

As one of the globalist insiders, Reince Priebus isn’t portraying Speaker Paul Ryan as the problem or as being at fault.  Instead, Priebus is embracing Ryan, the most disloyal anti-Trump neo-con Trotskyite in the House.  Remember Ryan gave us the rotten ObamaCare 2.0 as the only option.  Priebus apparently was successful in convincing our President that conservatives who were committed to the American people should be vilified for not going along with this monstrosity. 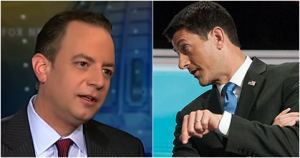 RyanCare 2.0 was not worth passing, and would have been political suicide for the Republicans.  We don’t want overtures to the Democrats.  We want Obamacare repealed completely, without any fixes.  Just get rid of the damned thing!

I find it worrisome that the President has tweeted that he will consider courting Democrats in order to pass his legislation.  It seems that the quality of the legislation, which would have hurt middle class Americans, is less of an issue than having another win.  The President had better be careful not to lose the support of the grassroots Americans who put him in office.

What is shocking is that Paul Ryan is being lauded for bringing forth a rotten piece of legislation that would have been a total disaster, while conservatives are disrespected.  Our President is a supposedly a savvy businessman, but I believe he needs someone close to him who he can fully trust to read these bills before he listens to globalist insiders who want to sell him a bill of goods that will destroy him.  Trump needs to stick with his base, and he needs to hire some grassroots researchers who know the truth.

Socialist Democrat, Bernie Sanders, couldn’t wait for the first repeal and replacement of Obamacare to go down in flames.  He was right there proposing his single provider plan, and surely the looney liberal commie leftists in the Democrat party, along with several of the left leaning fools in the Republican party, will go right along with this.

The democrats will all stick together, and when Obamacare collapses, when the middle class is denied healthcare because of skyrocketing premiums, and outrageous deductions, the Socialists once again move in to take over.  Where are the Republicans?  Divided, again, with the leftist likes of Paul Ryan, who should be ousted from the House.  Wealth redistribution reigns, and to hell with the American people!

Saul Alinsky died in 1972, but his writings influenced those behind the scenes in political control of our nation today.  He said, “Control healthcare and you control the people.”  He was right, and so were Democratic Socialists, Cloward and Piven, who said the same thing.

Look, healthcare is not a right, it is a need.  How you fulfill that need is your personal responsibility.  If someone willingly donates money or services to meet that need, that is their choice.  However, if the government forcibly takes your money, or property, to provide for another citizen or illegal alien’s health care, that is a high crime; a total violation of our Constitutional rights.  It is wealth REDISTRIBUTION! 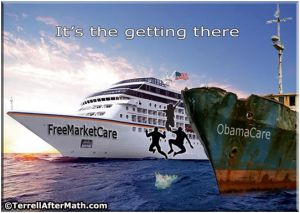 The Constitution IS A LIMITATION ON GOVERNMENT, not individual rights.  Capitalism and free market, free enterprise is our forefathers’ charter for protecting us against excessive government, which is also well known as Socialism/Communism!

J.D. Pendry’s latest article, Always Follow the Money, spelled out some important facts about who BC/BS wanted to win.  Ahem.  It’s a short article, but through the website Open Secrets, Pendry highlights just where millions in donations went during the 2016 election cycle.  Talk about spreading the wealth around!

Pendry opines, “I certainly do not have a problem with legal campaign contributions, but I get concerned when an insurance carrier as large as Blue Cross/Blue Shield spreads around this much cash and even more concerned when these many politicians elected and sworn to fix our looming health care disaster are recipients of it.  When that happens, what real chance does average Middle Class America have at getting legislation that favors them?”

J.D. is absolutely right, and that’s why it is up to the American people to let our president know that we want Obamacare totally repealed, with no replacement!  Let the free market rule and reign! 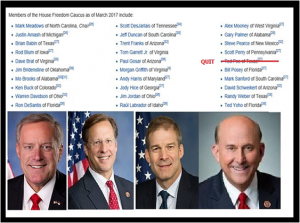 Representative Jim Jordan, Chairman of the House Freedom Caucus, along with 30 of the most conservative members of Congress, said this bill didn’t go far enough, and they were right.  It didn’t, and that’s why they were against it!  The members are very pro-life and against Planned Parenthood, but RyanCare simply did not defeat enough of Obamacare.

Jordan was interviewed by Chris Wallace who attacked him for not passing the RyanCare bill and repeated what Speaker Ryan had said, “We’re now stuck with Obamacare for the foreseeable future.” Jordan stated that only 17% of Americans were actually for the “American Health Care Act.”

It is of interest that Ted Poe of Texas dropped out of the Freedom Caucus over their unwillingness to support this horrific bill.

On January 3, 2017, Steve King put forth H.R. 175 to abolish the ACA, or Obamacare.  It has been languishing in committees since then.  However, it is a house resolution, and as such carries no force of law even if passed.

Mo Brooks, representative from Huntsville, AL, submitted a one sentence act to eliminate Obamacare. “Effective as of Dec. 31, 2017, the Patient Protection and Affordable Care Act is repealed, and the provisions of law amended or repealed by such Act are restored or revived as if such Act had not been enacted,” the bill states.

Interesting that it has absolutely no sponsors…

In my article, Repeal, But Don’t Replace ObamaCare, I revealed how Congress created this crisis, and how it goes all the way back to the early 1900s.

I believe the only way to fix all this mess is to repeal Obamacare in its entirety. Mandate that all insurance must go back to where it was, Mo Brooks bill is superb! I know my insurance costs would drop exponentially.  Then, anyone who cannot get coverage goes to Medicaid. Obama converted healthcare to a tax…it was a tax; plain and simple. Any attempt to keep Obamacare and tinker with it will fail, because the people want it gone, the middle class hates it, and it’s destroying us.

There was absolutely NOBODY on Capitol Hill who was fully aware of everything in Obamacare.  Remember Pelosi said we had to pass it to know what was in it!

The “Affordable Care Act” did not make health insurance affordable for anyone other than those who could not get it and belonged on government systems, and who were illegal aliens. The rest of us paid more, not less. Healthcare is a total mess and it has risen to such a high consumption level within the entire GDP, it reduces disposable income of the average household and that acts simply as an economic depressant.

President Trump, keep your promise to the people who elected you.  We don’t want Obamacare fixes, we want it totally REPEALED!