On Thursday morning, President Donald Trump didn’t beat around the bush when he bluntly alleged that his predecessor President Barack Obama’s minions were electronically eavesdropping on American civilians. His tweet comes after the issuance on Wednesday of Congressional subpoenas for 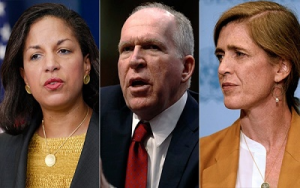 The subpoenas, which were processed and signed by the House Intelligence Committee chairman Rep. Devin Nunes, R-California, directly referred to the suspicious “unmasking” of U.S. citizens.

In his Twitter posting on Thursday, President Trump stated: “The big story is the ‘unmasking and surveillance’ of people that took place during the Obama

Many news reporters were a bit surprised that Amb. Powers is included on Nunes’ list, but according to one Washington insider, Steven Kaufman a former criminal investigations commander, “People will be surprised at the extent Obama’s close associate Susan Powers was involved in unauthorized activities that had the feds involved in questionable activities. She may even have run this surveillance operation.”

Meanwhile, according to the Democrat-friendly MSNBC, Rice continues to claim she did nothing wrong in her use of unmasking. “The allegation is somehow Obama administration officials utilized intelligence for political purposes, that’s absolutely false,” Rice told MSNBC in an interview in April.

President Trump said in April that Susan Rice — who has gained the reputation of being dishonest — had indeed committed a serious criminal act.

Fox News Channel’s James Rosen reported Thursday that Congressman Nunes stated: “I went and looked at what I knew existed on the unmaskings, but what I found was a treasure trove of stuff that’s really bad in terms of surveillance on Americans and that is critical to the job that I have as chairman of the House Intelligence Committee. It’s really horrible because it endangers America, because the work that our intelligence professionals do is so critical to our safety, to have an administration, a past administration, abuse these powers and put our country in jeopardy, there’s nothing, there’s no words that can explain the damage they’ve done and the damage that they’ve created.”

This isn’t the first time the Obama administration played loose and fancy free with the confidential information of American citizens. The Internal Revenue Service under Obama may have actually broken the law by “unmasking” taxpayers.

Obama’s and Staff’s History of Unmasking

During the probe of the Internal Revenue Service, it was discovered that emails sent between the Internal Revenue Service’s Lois Lerner and attorneys at the Federal Election Commission revealed that the IRS gave the FEC confidential information regarding conservative groups, especially those calling themselves Tea Party organizations were released on Halloween by a Washington, D.C., public-interest group that investigates government corruption.

According to officials at the nonpartisan government watchdog Judicial Watch, included with the Lois Lerner-FEC emails were the IRS questionnaires submitted to a conservative organization, which legally sought tax-exempt status, that contained “questions of a hostile nature.”

The emails were turned over to Judicial Watch by the FEC as a result of an Aug. 9, 2013, Freedom of Information Act (FOIA) application that sought access to the following documents and records for the timeframe Jan. 1, 2009, to the present:

According to Judicial Watch, before her becoming the IRS’s Director of Exempt Organizations, Lois Lerner worked at the FEC where she developed a reputation for wielding her power against a conservative candidate and Christian-based political groups. 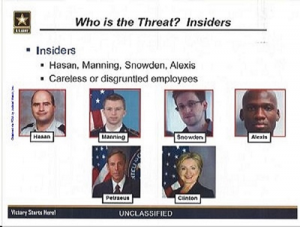 In her response email sent to the FEC, Lerner stated that she would make it mandatory for her underlings to cooperate fully, something that smacks of an anti-conservative conspiracy, according to political strategist Mike Baker.

Lerner stated in her responding email: “I have sent your email out to some of my staff. Will get back to you as soon as I have heard from them.”

The majority of documents obtained by Judicial Watch analysts consists of extensive materials from IRS files sent from Lerner to the FEC containing detailed, confidential information about the conservative or vilified Tea Party organizations.

The items include annual tax returns and request for exempt recognition forms, Articles of Organization and other corporate documents, as well as correspondence between the conservative organizations and the IRS.

Initial news reports, such as a story in the Washington Post, when word of some of these IRS-FEC emails first surfaced, raised a variety of legal issues. One legal issue was the fact that Lerner was supplying confidential information concerning the tax exempt application status of conservative organizations to an agency that had no right to receive such information.

Another was the fact that the inquiries regarding AFF made by the FEC attorneys in February 2009 to Lerner occurred before the FEC commissioners had voted on whether to investigate AFF (the FEC later voted not to investigate AFF). A third legal issue was the appearance of political collusion between government agencies with a seemingly anti-conservative bias.

Lerner resigned her position at the IRS in early October. In May, she invoked her Fifth Amendment right against self-incrimination in her, some say, arrogant appearance before Chairman Darrell Issa’s House Committee on Oversight and Government Reform, according to Caroline May, political reporter for the Daily Caller.