Venezuela at one time was considered a tourist attraction and one of the most successful nations in South America. However, in 1999, Hugo Chavez won the election as President of the oil rich and industrious country and began his reign as predicted: a hardcore socialist country. Under Chavez, Venezuela went from being a prosperous capitalist nation with many nations – including the U.S. – opening businesses with the blessings of centrist politicians.

When Chavez died in 2013, Nicolas Maduro Moros took over the quasi-dictatorship that in 14 years went from a relatively prosperous nation and became an impoverished Latin American country that resembled Fidel Castro’s Cuban economic basket case. Under President Maduro, Venezuela continued on its neo-Marxist path but added one more ingredient: Cocaine trafficking with a Colombian terrorist group.

According to a report from President Donald Trump, U.S. Attorney General William Barr and the Department of Justice, Maduro and other high ranking Venezuelan officials allegedly partnered with Colombia’s Drug-Trafficking/Marxist terrorist organization known as FARC in the hopes of effectively using cocaine as a weapon to “flood” the United States and either kill or destroy the lives of Americans especially young school children. 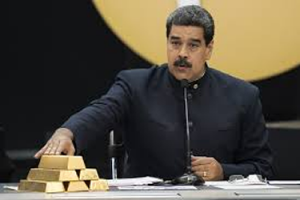 The President of Venezuela, who lost the last election, has refused to recognize the results of the political contest and therefore he’s refused to relinquish power.

Besides Maduro, Venezuela’s vice president for the economy, Venezuela’s Minister of Defense, and Venezuela’s Chief Supreme Court Justice are among those charged in New York City; Washington, DC; and Miami.

Along with current and former Venezuelan government officials, two Fuerzas Armadas Revolucionarias de Colombia (FARC) leaders were indicted in the same case, according to a statement from U.S. Attorney General William P. Barr sent to the National Association of Chiefs of Police.

“The Venezuelan regime, once led by Nicolás Maduro Moros, remains plagued by criminality and corruption,” said Attorney General Barr.  “For more than 20 years, Maduro and a number of high-ranking colleagues allegedly conspired with the FARC, causing tons of cocaine to enter and devastate American communities.  Today’s announcement is focused on rooting out the extensive corruption within the Venezuelan government – a system constructed and controlled to enrich those at the highest levels of the government.  The United States will not allow these corrupt Venezuelan officials to use the U.S. banking system to move their illicit proceeds from South America nor further their criminal schemes.”

“Today we announce criminal charges against Nicolás Maduro Moros for running, together with his top lieutenants, a narco-terrorism partnership with the FARC for the past 20 years,” said U.S. Attorney Geoffrey S. Berman.  “The scope and magnitude of the drug trafficking alleged was made possible only because Maduro and others corrupted the institutions of Venezuela and provided political and military protection for the rampant narco-terrorism crimes described in our charges.  As alleged, Maduro and the other defendants expressly intended to flood the United States with cocaine in order to undermine the health and well being of our nation. Maduro very deliberately deployed cocaine as a weapon. While Maduro and other cartel members held lofty titles in Venezuela’s political and military leadership, the conduct described in the Indictment wasn’t statecraft or service to the Venezuelan people.  As alleged, the defendants betrayed the Venezuelan people and corrupted Venezuelan institutions to line their pockets with drug money.”

“Over the last decade, corrupt Venezuelan government officials have systematically looted Venezuela of billions of dollars,” said U.S. Attorney Ariana Fajardo Orshan.  “Far too often, these corrupt officials and their co-conspirators have used South Florida banks and real estate to conceal and perpetuate their illegal activity.  As the recent charges show, Venezuelan corruption and money laundering in South Florida extends to even the highest levels of Venezuela’s judicial system.  In the last couple of years, the US Attorney’s Office in South Florida and its federal law enforcement partners have united to bring dozens of criminal charges against high-level regime officials and co-conspirators resulting in seizures of approximately $450 million dollars.”

“These indictments expose the devastating systemic corruption at the highest levels of Nicolas Maduro’s regime,” said DEA Acting Administrator Uttam Dhillon.  “These officials repeatedly and knowingly betrayed the people of Venezuela, conspiring, for personal gain, with drug traffickers and designated foreign terrorist organizations like the FARC.  Today’s actions send a clear message to corrupt officials everywhere that no one is above the law or beyond the reach of U.S. law enforcement.  The Department of Justice and the Drug Enforcement Administration will continue to protect the American people from ruthless drug traffickers – no matter who they are or where they live.”

“The collaborative nature of this investigation is representative of the ongoing work HSI and international law enforcement agencies perform each day, often behind the scenes and unknown to the public, to make our communities safer and free from corruption,” said HSI’s Acting Executive Associate Director Alysa D. Erichs.  “Today’s announcement highlights HSI’s global reach and commitment to aggressively identify, target and investigate individuals who violate U.S. laws, exploit financial systems, and hide behind cryptocurrency to further their illicit criminal activity.  Let this indictment be a reminder that no one is above the law – not even powerful political officials.”

(1) participating in a narco-terrorism conspiracy, which carries a 20-year mandatory minimum sentence and a maximum of life in prison.

(2) conspiring to import cocaine into the United States, which carries a 10-year mandatory minimum sentence and a maximum of life in prison.

(4) conspiring to use and carry machine guns and destructive devices during and in relation to, and to possess machine guns and destructive devices in furtherance of, the narco-terrorism and cocaine-importation conspiracies, which carries a maximum sentence of life in prison.  The potential mandatory minimum and maximum sentences in this case are prescribed by Congress and provided here for informational purposes only, as any sentencing of the defendants will be determined by the judge.

According to the allegations contained in the superseding indictment, other court filings, and statements made during court proceedings:

Since at least 1999, Maduro Moros, Cabello Rondón, Carvajal Barrios and Alcalá Cordones, acted as leaders and managers of the Cártel de Los Soles, or “Cartel of the Suns.”  The Cartel’s name refers to the sun insignias affixed to the uniforms of high-ranking Venezuelan military officials.  Maduro Moros and the other charged Cartel members abused the Venezuelan people and corrupted the legitimate institutions of Venezuela—including parts of the military, intelligence apparatus, legislature, and the judiciary—to facilitate the importation of tons of cocaine into the United States. The Cártel de Los Soles sought to not only enrich its members and enhance their power, but also to “flood” the United States with cocaine and inflict the drug’s harmful and addictive effects on users in the United States.

Marín Arango and Hernández Solarte are leaders of the FARC.  Beginning in approximately 1999, while the FARC was purporting to negotiate toward peace with the Colombian government, FARC leaders agreed with leaders of the Cártel de Los Soles to relocate some of the FARC’s operations to Venezuela under the protection of the Cartel. Thereafter, the FARC and the Cártel de Los Soles dispatched processed cocaine from Venezuela to the United States via transshipment points in the Caribbean and Central America, such as Honduras.

By approximately 2004, the U.S. Department of State estimated that 250 or more tons of cocaine were transiting Venezuela per year.  The maritime shipments were shipped north from Venezuela’s coastline using go-fast vessels, fishing boats, and container ships.  Air shipments were often dispatched from clandestine airstrips, typically made of dirt or grass, concentrated in the Apure State. According to the U.S. Department of State, approximately 75 unauthorized flights suspected of drug-trafficking activities entered Honduran airspace in 2010 alone, using what is known as the “air bridge” cocaine route between Venezuela and Honduras.

In his role as a leader of the Cártel de Los Soles, Maduro Moros negotiated multi-ton shipments of FARC-produced cocaine; directed that the Cártel de Los Soles provide military-grade weapons to the FARC; coordinated foreign affairs with Honduras and other countries to facilitate large-scale drug trafficking; and solicited assistance from FARC leadership in training an unsanctioned militia group that functioned, in essence, as an armed forces unit for the Cártel de Los Soles.

An indictment unsealed today in the District of Columbia charges Vladimir Padrino Lopez, 56, Minister of Defense of Venezuela. The indictment alleges that from March 2014 until May 2019, Padrino Lopez conspired with others to distribute cocaine on board an aircraft registered in the United States.

Padrino Lopez, who holds the rank of General in the Venezuelan armed forces, held the authority for interdicting aircraft, many of which are registered in the United States, suspected of being used to traffic drugs from Venezuela to countries in Central America.  On numerous occasions, Padrino Lopez ordered or authorized the Venezuelan military to force suspected trafficking aircraft to land or to shoot down the aircraft.  However, Padrino Lopez allowed for other aircraft whose drug trafficking coordinators paid bribes to him to safely transit Venezuelan airspace.

On Sept. 25, 2018, the U.S. Department of the Treasury’s Office of Foreign Assets Control (OFAC) included Padrino Lopez on its Specially Designated Nationals List.  Pursuant to the Foreign Narcotics Kingpin Designation Act, this means that his assets are blocked and U.S. persons are generally prohibited from having financial transactions with him.