History’s third impeachment trial began Tuesday with an angry Rep. Adam Schiff accusing President Donald Trump of engaging in a ‘corrupt’ effort to get Ukraine to help him ‘cheat’ to win his reelection.

Schiff, a California Democrat, is heading a team of impeachment managers made up of the most of Trump hating Democrats serving in the House of Representatives. He kicked off the trial by making his case before 100 senators seated at their desks with the Chief Justice John Roberts of the U.S Supreme Court officiating.

“What I found laughable was Shifty Schiff, a proven liar, telling the Senators they must provide for an honest and fair trial that lets both sides make their case. Schiff and [Rep. Jerry] Nadler ran the process in the House and did everything they could to prove their case. But they failed miserably and sent the Senate a fraudulent case for indictment,” said former New York police detective and law professor Jacob Skolbey.

“Despite facing rabid Deep State lackeys, the Republicans won the initial legal battle in impeachment trial when the Senate voted down an attempt by New York’s Sen. Chuck Schumer to subpoena a number of documents from the Trump White House regarding the Ukrainian government,” Prof. Skolbey told Conservative Base. Skolbey added that the lawmakers’s voted against Schumer’s amendment (53-47).

Well-known attorney Jay Sekulow, who is one of the most prolific and victorious lawyers in America, is leading President Donald Trump’s defense in the Senate impeachment trial. He quickly has exposed the Democrat ‘trifecta’ that makes impeachment unconstitutional.

He accused the Democrats of denying President Trump’s right to cross-examine witnesses in the House “fishing expedition, Trump’s right to have complete access to the Democrats’ so-called evidence, and have legal counsel present at all hearings whether they be public, televised hearings or closed door secret interviews/interrogations. 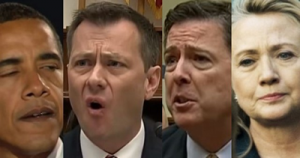 Rep. Schiff angrily criticized the proposed rules package and said Trump sought to ‘coerce’ Ukraine into helping him ‘cheat’ in the election.

However, former military intelligence operative and law enforcement official Sid Franes said, “Schiff makes these outlandish statements because he’s confident the mob in the media won’t complain about his lack of honesty and his disrespect for the nation’s Commander in Chief. These Democrats are disgusting politicians who remind American patriots of the leaders in China, Russia, Venezuela, Cuba, Iran and other countries run by dictators and oligarchs.”

According to the impeachment document handed over to the U.S. Senate Majority Leader Mitch McConnell, Trump is allegedly guilty of abusing his power and for obstruction of Congress for holding back military aid for Ukraine in order to get them to probe former Vice President Joe Biden and his wayward son, Hunter Biden, whose list of transgressions includes being tossed out of the U.S. Navy, drug abuse charges including crack-cocaine, and other misdemeanor crimes.

At 1:17 p.m. (eastern) on Tuesday, the Supreme Court’s Chief Justice started the first debate of his trial: how it will be run.

Senate Majority Leader Mitch McConnell released his list of trial rules the night before, and as expected Senate Minority Leader Chuck Schumer called the rules ‘a cover-up not a trial’, he said the rules were ‘completely partisan’ and said they appear to have written by President Trump.

McConnell then modified his initial package to allow 24 hours of debate for each side over three days. “What I hope and pray for is that the Republicans begin playing ‘hardball’ with the Democrats, who are dishonest manipulators who stand smack dab on the thin line between patriotism and treason.

McConnell plans to have Democrats start prosecuting Trump on Wednesday with 24 hours over two days to make their case.

Hearings could go long into the night, and Trump will be absent on Tuesday and Wednesday at the World Economic Forum in Davos, Switzerland.

Trump attorney Jay Sekulow slammed House managers, who are acting as “prosecutors” during President Donald Trump’s impeachment trial, for the way they have handled the impeachment process. “Since the president was sworn into office, there was a desire to see him removed,” Sekulow said as he defended a resolution that would govern the trial.