There has been a nonstop discussion about President Trump’s temporary proposed ban of the entry of persons from six Muslim majority nations. While I applaud President Trump for his courageous stand on this important issue, I am disappointed that he did not go far enough.

There are 57 Muslim nations and they all share the same mantra about Islam. They have a common Islamic psychological milieu, and called an Islamic “diet.” 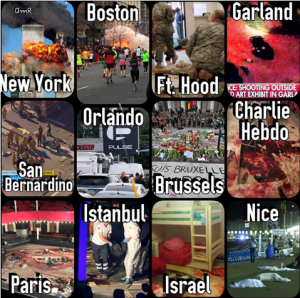 People as a group or as individuals are different and none is perfectly healthy psychologically. We all have a loose wheel or two as we travel the bumpy road of life. Yet, most people manage to stay on course most of the time, with perhaps a stop or two at a repair shop of a mental health professional.

Most psychological disorders are exaggerations, deficits or surfeits of the generally accepted norm—whatever the norm may be. When caution, for instance, is practiced past suspicion, then we have paranoia; when reasonable fear is exercised beyond any justification, then there is phobia. The degree and severity of a condition frequently determine the presence or absence of psychopathology.

As mentioned above, Muslims share a particular common Islamic psychological milieu, whether they live in Islamic lands or in societies predominantly non-Islamic. The psychological condition of any Muslim group or individual is directly dependent on the kind and amount of Islamic diet they consume. The Islamic diet has numerous ingredients—some of which are wholesale, some are dangerously toxic, and some are between the two extremes, but they all share exactly the same Islamic fatalism. That’s the will of “Allah.”

Allah’s hand is above all other hands, adorns every imaginable space in Islamic lands—a telling point about the Muslim’s fatalism and submission to the omnipotent omnipresent hand. If something happens, it is Allah’s will. If it doesn’t, it is Allah’s will. The rank and file Muslim has little will of his own. It absolves him of any and all responsibility. This mentality is in stark contrast with the “take charge” and “can do” mentality characteristic of Americans and other Western societies.

Islamic ideology is a creed of an ignorant people in a primitive and barbaric age. It is fixated in time and place; it harbors the ambition of taking the 21st century world back 14 centuries and ruling it by its dogma of violence, intolerance, injustice and death. And all 57 Muslim nations share this view, not just six countries on Trump’s list.

Well, the Muslims’ allies, America’s left keep asserting that America was built by immigrants from all nations. Here are the facts: the vast majority of those voluntary immigrants were White Christians with a heady leavening of Jews. These groups shared a developed and developing drive in support of “equal justice under the law” and strong traditions against such crimes as murder, genocide, rape, unjust war, robbery, theft and other crimes easily understood by most sane persons.

For the most part, these European immigrants also developed a nation which individuals and private organizations provide help to the unfortunate without regard to race, color, nationality, etc.

Let’s look at history: the number of Muslims who came to the United States (before 1918, when our nation was well established) was too little to be statistically meaningful. Besides, Muslims don’t come here to live and work peacefully; they come here to make Islam the law of the land.

By now, many ordinary Americans are beginning to comprehend that Islam commands a “Perpetual War” (Jihad) against “unbelievers” and allows, encourages and commands those waging Jihad to use murder, rape, genocide, torture and other horrors to forward the world conquest goal of Islam.

The claim that the immigration of Muslims is another face of that incoming as built our nation is another example of “Tell a lie often enough and it becomes the truth” as has been attributed to such lovers of liberty as V. Lenin and A. Hitler.

What should Americans do?

Islam in its fourteen hundred years of existence has never been the religion of peace. It has always been at war with infidels. A never-ending war. What should Americans do? They should demand that politicians, Islamic apologists, and paid-for media sycophants do not abuse freedom by lying about Islam. When these people portray Islam as a religion of peace, they are lying through their teeth. Just take a quick look at Islam’s history as well as what is happening today in Islamic lands. Islam is not a religion of peace and it has never been. Islam is violent, oppressive, racist, and irrational at best.
Islam and Women

It is also a fact that Islam teaches that it is proper to sexually use girls as young as nine-years-of-age, that women must have inferior status to males as witnesses in courts and in shares of inheritances and that husbands may beat their wife or wives when those males deem it necessary.

Women are relegated in Islam to a second-class status, depriving them of many rights enjoyed by men. Thus, life goes on for Muslim women with all the trappings of Islamic misogyny. Such is the plight of women under Islam. There is hardly the need to provide an exhaustive list of Islamic misogynies to qualify it as a shameful, discriminatory and oppressive religious apartheid.

Perhaps one of the most important outcomes of the HLFT was that the FBI reevaluated its relationship with the Council on American-Islamic Relations (CAIR), after significant evidence emerged during the trial about CAIR’s links to the U.S. – Hamas infrastructure. Again, like some other religious minorities, Muslims are not well-known for extending “charity” to others. However, and in the USA, Muslims have been found guilty of sending “charitable contributions” to terrorist groups.

Over the years, Islamic leaders have found it expedient to feed the masses mainly the toxic ingredients to further their own interests. Individuals and groups, for instance, have used the immense energizing power of hatred to rally the faithful; the cohesive force of polarization to create in-group solidarity; and, the great utility value of blaming others for their real and perceived misfortunes. Jews have been their favorite and handy scapegoats from day one. To this day, as true fascists, like the Nazis, Muslims blame just about everything on Jews.

It is for this present and imminent danger that the free people of the world must rise and do all they can to preserve their birthright of liberty. Muslims in non-Islamic lands may seem harmless, and many of them indeed are. Yet, Islam compels its leaders to uphold and promote its tenets at any and all costs to anyone. It is for this reason that on the one hand the Islamic governments sign the U.N. Charter that condemns apartheid, and on the other hand, they violate every provision of it when they are in power.

Small Victory for the Trump Administration

On June 26. 2017, The Supreme Court asserted it will decide the fate of President Trump’s revised travel ban, agreeing to hear arguments over immigration cases that were filed in federal courts in Hawaii and Maryland and allowing parts of the ban that has been on hold since March to take effect.

President Donald Trump is on the right track.  It is a matter of national security, not just politics. But I believe he should vet every Muslim majority country attempting to enter the US, not just these six.