The American people during the last two presidential-terms under the Democrats witnessed a marked deterioration in the enforcement of immigration laws, the treatment of U.S. border and enforcement agents by the Obama administration and Democratic Party politicians — who called immigration and border patrol agents “the Gestapo” and “unamerican” — and the low-morale and increased corruption within the system and its ranks.

On Monday, May 22, 2017, the FBI’s Phoenix Field Office public information officer (PIO) announced the agency’s collaboration with other law enforcement departments, including the U.S. Customs and Border Protection (CBP), are increasing activities that lead to transparency as opposed to “sugar-coating” reports.

The FBI, as a result of President Donald Trump’s mission to drain the swamp that permeates federal agencies, seeks the raising of awareness with regards to the dangers of border corruption. The effort is part of a larger FBI campaign to address corruption at America’s borders.

Law enforcement officials will be encouraging U.S. citizens and federal, state and local government employees who witness — or suspect — border corruption to report it to their local FBI field office.

One of FBI’s priorities is to combat public corruption, which includes border corruption. “Border corruption poses a significant risk because of the number of people who cross the border every day. Drug and human trafficking, and terrorism are all potential threats facing the U.S. and its citizens,” said Jill McCabe, an FBI public affairs specialist in Phoenix, Arizona.

The Phoenix FBI Field Office is one of about a dozen FBI offices whose area of responsibility include U.S. ports of entry, such as land border crossings, airports, and seaports. The other U.S. cities are Albuquerque, New Mexico; Buffalo, New York; Detroit, Michigan; El Paso and San Antonio, Texas; Fargo, North Dakota; Los Angeles and San Diego, California; Miami, Florida; and Seattle, Washington.

Michael DeLeon, Special Agent in Charge of the FBI’s Phoenix Field Office, which covers all of Arizona said in a statement: “We are committed to investigating and prosecuting public officials guilty of corruption, as evidenced by the FBI’s Yuma Border Corruption Task Force.”

San Luis Port of Entry Director John Schwamm added, “Corruption, at any level, whether it involves our community, state or federal law enforcement officers, and even our elected officials, can potentially impact our national security. It affects the men and women we trust to keep our communities and families safe from today’s dangerous world.”

“Every year, thousands of local, state, and federal law enforcement officers recite the oath of office to defend and protect the Constitution of the United States and to enforce our nation’s laws. Each of us takes this oath freely and with no obligation but to keep you safe. We trust and encourage you to report all acts of corruption,” Schwamm urged citizens. 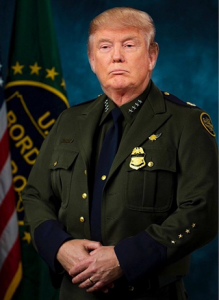 According to the FBI PIO Jill McCabe, “The Department of Homeland Security [DHS] investigators are assigned to the FBI’s Yuma Border Corruption Task Force and are actively engaged in investigating insider threats, as well as detecting bad actors who attempt to use our ports and airports as points of entry for corruption.”