A constitution is not the act of a government, but of a people constituting a government; and government without a constitution is power without a right. All power exercised over a nation, must have some beginning. It must be either delegated, or assumed. There are no other sources. All delegated power is trust, and all assumed power is usurpation. Time does not alter the nature and quality of either. Thomas Paine

Ah yes, far leftist, Fauxcahontas Elizabeth Warren was the creator and promoter of the Consumer Financial Protection Bureau (CFPB). It was rammed through by a Democrat-dominated Congress in 2010. Under the statute that created the Consumer Financial Protection Bureau, the director is appointed by the president with the advice and consent of the Senate, and the deputy is appointed by the director.  Yes, the democrats set up this unconstitutional CFPB to launder money for their liberal causes. 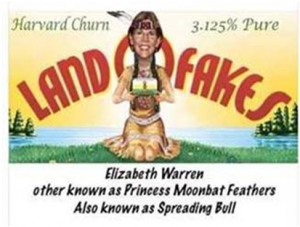 Warren’s CPFB is the most partisan agency in the federal government in terms of donations to candidates, according to campaign finance data.

Elizabeth Warren, who lied about her heritage to get a Harvard professorship, claimed she was part native American.  She is not. She is a hardcore leftist communist who is hellbent on funding socialist Democrats through a government agency accountable to no one.  Fauxcahontas Warren is a total fraud.

Employees at the CFPB, which was created by the Dodd-Frank Wall Street Reform and Consumer Protection Act, contributed nearly $50,000 during the 2016 campaign with all of that money going to aid Hillary Clinton or her rival, socialist Bernie Sanders.  Agency employees made more than 300 donations during the campaign. Not one went to a Republican candidate.

So, what is the Dodd-Frank Act?  It’s the result of the sub-prime mortgage thought up by Democrat President Jimmy Carter and implemented by Democrat President Clinton.  The federal government threatened lending institutions, banks and otherwise, to loan money to people who would never be able to pay it back so they could buy homes.

Another two democrats, Chris Dodd and Barney Frank were the authors of the act which was bludgeoned through by Obama to supposedly punish Wall Street and expand lending to average Americans. The real truth was this horrid law is actually one of the biggest expansions of the federal regulatory state. As a result of the new standards, Dodd-Frank’s regulatory structure slashed the percentage of individual Americans who could qualify for a mortgage from 52 percent before President Obama to 26 percent afterwards. Lovely, right?  Typical of the Dems to screw the middle class.

Five years after the law’s passage, the National Association of Realtors said the percentage of first time home buyers had plunged to the lowest point in three decades and was preventing a healthier housing market from reaching its full potential.  Thanks again to the socialist Democrats.

The CFPB is another coverup allegedly to protect consumers who were being victimized and set upon and ruined by these greedy, horrible lenders who wanted their loans paid.  What a house of cards, all created to cover up and again to mask the incompetence of the left, but they created it to regulate the financial industry! 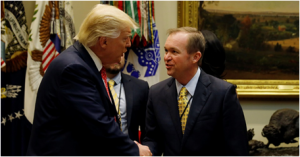 Our President decided to throw a wrench in this democrat controlled pile of dung, and he appointed Mick Mulvaney for the temporary position of Director of the Consumer Financial Protection Bureau after current director Richard Cordray stepped down. However, Cordray said he was taping a Deputy to run the agency.  This was a move to attempt to prevent the White House from naming a successor, and to keep their dirty democrat money laundering outfit being run by their own people.

The White House saw Cordray’s CFPB step up its work in the months since Trump’s election, going farther into what Weekly Standard journalist, Shannen Coffin, calls the agency’s “regulatory overreach.”

Mulvaney is a conservative budget-cutter who once called the agency a “sick, sad” joke.  “It’s a wonderful example of how a bureaucracy will function if it has no accountability to anybody,” Mulvaney, a former South Carolina representative, said in a 2014 interview with the Credit Union Times. “It turns up being a joke, and that’s what the CFPB really has been, in a sick, sad kind of way, because you’ve got an institution that has tremendous authority over what you all do for a living.”

When asked by Sen. Jeff Merkley (D-OR) about the comments during one of his confirmation hearings to become Office of Management and Budget (OMB) director in January, Mulvaney stood by them.

During Barack Hussein Obama’s reign, nary a challenge came against any of his Executive Orders (EO), his biased new programs, his appointees, his costly vacations, or his actions with our allies and foreign governments.  The Republicans were silent.

Now however, we constantly see every Trump EO challenged by the left and slowed by the right, along with every appointment and every firing, especially that of dirty cop James Comey.  This CFPB mess is a new twist that is so unconstitutional that it boggles the mind.

Leandra English was tapped as acting director by outgoing Director Cordray, and she filed a complaint in the U.S. District Court for the District of Columbia against Trump and Mulvaney, the nominee for CFPB’s interim leader.  She claims she is the rightful acting director of the CFPB because she was appointed by the acting director, and the court should therefore bar Mick Mulvaney from taking the job, claiming a provision in Dodd-Frank Act lays out the line of succession which supersedes the Federal Vacancies Act. All unconstitutional rubbish.

When Mulvaney showed up on Monday 27 November 17 at the CFPB, he brought a bag of donuts, and told everyone to ignore anything that came from Leandra English.  Watch this minute long Mulvaney speech, it’s fabulous.

Director Mulvaney explained that the CFPB will be totally different than it was under Obama, that we have a new chief, and elections have consequences.  He also explained that there will be a 30-day regulatory and hiring freeze, that everything stops until he has an opportunity to familiarize himself with the agency.  Mulvaney said he plans to protect people without trampling on capitalism.

Mick Mulvaney certainly seems to be an exceedingly wise choice by President Trump.  And with what this director knows about this agency, I would not be surprised if he didn’t recommend that the agency be totally dismantled in the future.