Home/February 2018, Opinions/Trumpocalypse, FBI And The Globalist Coup Against Donald Trump

Trumpocalypse, FBI And The Globalist Coup Against Donald Trump

The clear majority of the mainstream media in true Orwellian form is attempting to change the consciousness of the American people regarding the truth of the FBI memo by using the Alice in Wonderland logic of the Mad Hatter.

The simple truth appears to be that high-level members of the Department of Justice like special counsel Robert Mueller, ousted FBI Director James Comey, FBI Deputy Director Andrew McCabe, and Deputy Attorney General Rod Rosenstein misled the FISA court by failing to state a conflict of interest, and that the primary source of the Trump-Russia collusion dossier was created by former British Intelligence officer Christopher Steele who hated President Donald Trump and was hired in part by the DNC to destroy and even impeach Trump.

According to The Washington Post, it was the FBI itself that authorized payments to Steele for work on the dossier. Both top FBI and DOJ officials knew the political origins of the dossier. The FBI like the CIA is just one part of what is known as the Deep State.

According to the four-page GOP House Intelligence Committee Chairman Devin Nunes memo accusing the FBI of abusing surveillance authority, the FBI began a campaign to keep information from the committee and the American public by claiming it contained classified information that could bring danger to our nation.

One could conclude from reading Massachusetts Institute of Technology Professor Emeritus Noam Chomsky’s book, Manufacturing Consent: The Political Economy of the Mass Media, that the mainstream media in the United States and around the world is totally controlled by powerful globalists and their multinational corporations that use social engineering, or scientific mind control, to “manufacture consent,” or a belief in fictional narratives that benefit the globalist elite at the expense of the working and middle class.

The mainstream media, controlled by just six globalist corporations, has been attempting to brainwash the American people into hating Trump and his policies. Yet, no other president in U.S. history, or prime ministers and presidents from nations around the world, have ever withstood, and in many respects, conquered the globalist- and Deep State-controlled mass media. 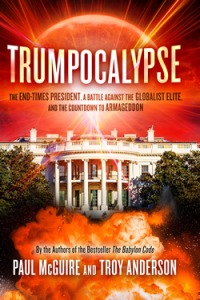 Trump possesses very unique qualities that cause the mass media to underestimate him which we discuss in our new, best-selling book Trumpocalypse: The End-Times President, a Battle Against the Globalist Elite, and the Countdown to Armageddon (FaithWords/Hachette Book Group).

But the first question that must be asked is why do the globalist elite, many of the highest-level leaders at the FBI and in the intelligence community, along with the mass media and the DNC and RNC establishments, hate Trump. The answer is never mentioned in the media, but the reality is that many members of the globalist elite consider Trump the greatest threat to globalism, and as such also to themselves, many people high up in the intelligence communities, the mass media, and elite Republicans and Democrats.

After all, Trump is anti-globalist and believes in nationalism, patriotism, Christian values, making America great again, Jerusalem, and many of things the globalists hate. The elite globalists believe in a one-world government secretly ruled by what Brave New World author Aldous Huxley called “the scientific elite.”

For decades, Democratic and Republican presidents have been carrying out the will of their globalist controllers by passing numerous trade treaties, including the Trans-Pacific Partnership. These globalist trade treaties destroyed the American working and middle class by causing over 80,000 manufacturing plants to leave America. As a result, hundreds of thousands of good-paying jobs were outsourced to Third World nations.

Naturally, the globalist elite got richer than in any time in human history. Today, just 1 percent of the population owns and controls 99 percent of the world’s wealth. Their goal is to destroy an economically-sustainable working and middle class and create just two classes—the globalist elite who will be the ruling class and the rest of the population who will be their slave class. None of these facts are ever revealed by the mass media.

In our book, Trumpocalypse, written by myself and Pulitzer Prize-nominated investigative journalist and former Los Angeles Daily News reporter Troy Anderson, we trace the origins of the Deep State to the Fabian socialists and super-globalists such as the late David Rockefeller, former chairman of Chase Manhattan Bank, who created the CIA after WWII by installing his man, Allen Dulles, as the first director of the CIA.

As we reveal in Trumpocalypse, many of the highest-level officers of the intelligence agencies do not truly work for the American people; they work for the globalist elite and the Deep State. This is what Aldous Huxley called the “scientific dictatorship,” where the masses can be programmed by scientific mind control. Fabian socialists such as prolific science fiction writer H. G. Wells who was the head of British intelligence during World War I, personally mentored Aldous and Julian Huxley who became directors in British intelligence too.

Rockefeller and CIA Director Dulles secretly brought in over 10,000 mind control scientists, rocket scientists and genetic scientists as part of Operation Paperclip after World War II. The CIA began conducting mind-control experiments using LSD as part of Project MKUltra. Aldous Huxley began directing mass LSD mind-control experiments with the help of the CIA during the counterculture revolution of the 1970’s.

As we detail in Trumpocalypse, both the Deep State and intelligence agencies began controlling the minds of the media and the public through various mind control programs and CIA funding of many large mainstream media outlets. The CIA also secretly funded many of the largest social media companies.

As Trump began to rise in popularity they used various technologies and social media weapons to bring him down. The FBI memo is just the tip of the iceberg hinting at a far larger operation.

The intelligence agencies and Deep State have used state-of-the-art propaganda tools against Americans for decades. According to journalist Alex Newman, “One stunning but proven example revealed in declassified documents was the CIA’s Project Mockingbird (also known as Operation Mockingbird). According to official documents, the scheme, launched in the early 1950s, aimed to hijack the U.S. media to parrot CIA propaganda. While many of the documents are heavily redacted, it’s clear that this CIA program was wildly successful in recruiting globalist pseudo-journalists to do the Deep State’s bidding. Among the names mentioned in the documents are Joseph Harsch of the Christian Science Monitor; Henry Luce, founder of Time and Life magazines; Walter Lippman of the Los Angeles Times Syndicate; CBS’ William S. Paley; Time magazine’s John Scott; Harry Schwartz of the New York Times; Chalmers Roberts of the Washington Post; Newsweek’s Malcolm Muir; and more. William F. Buckley, founder of neocon journal National Review, was also a CIA lackey. Each of those was also a member of the globalist Council on Foreign Relations, part of the Deep State behind the Deep State. Over 400 American “journalists” carried out assignments for the CIA, according to documents cited by Carl Bernstein of the Washington Post.”

As we document in Trumpocalypse, there is a growing awakening about the threat of the Deep State by major Christian leaders such as Franklin Graham, president of the Billy Graham Evangelistic Association.

In an interview with Todd Starnes of Fox News titled, “Franklin Graham warns of deep state coup against President Trump,” Franklin Graham, the son of world-renowned evangelist Billy Graham, stated that he feared Trump is facing a grave domestic threat by forces who want to take over the White House.

“I believe we are in a coup d’état,” Franklin Graham said on the Todd Starnes Radio Show. “There are people in this country who are wanting to destroy the president and take over the government by force.”

Franklin Graham has been increasingly speaking out because of all the information coming out about members of the Deep State, FBI and intelligence agencies whose texts reveal that they have been plotting against the president.

Troy Anderson and I uncovered all kinds of explosive information in our book Trumpocalypse about the Deep State, Shadow Government, the infiltration of the FBI and CIA, and the direct connection to powerful globalist secret societies who originated an ancient Babylon at the Tower of Babel and are now ruling America and the world secretly from behind the scenes.

Trump represents everything the elite globalists and their Orwellian thought-police media despise with their groupthink. However, due to an all-pervasive philosophical bias the Deep State does not understand the invisible power source behind Trump.

The reason they cannot understand it is because in their pride they falsely believe that what they consider the scientific view of reality is the only one that is based on scientific, empirical evidence.

The problem is that their view is not based on empirical evidence, but irrational humanism and occultism. Therefore, they are blind to the reality of a multi-dimensional power that empowers and surrounds Trump, and that is why they will ultimately lose.

About the Author: Paul McGuire

Paul McGuire is the author of 22 books, such as the best-selling, The Day the Dollar Died and Are You Ready for the Microchip? Paul is the host of the syndicated television show, The Paul McGuire Report. Paul McGuire hosted the nationally syndicated talk radio show, "The Paul McGuire Show" for 10 years. Paul McGuire is a television commentator and has been a frequent guest on the Fox News Network and CNN. Paul is the producer of two science fiction films in Hollywood. The History Channel did a 2-hour special with Paul McGuire entitled Seven Signs of the Apocalypse. Paul has interviewed numerous world leaders, Presidents and Prime Ministers. Paul lives in Los Angeles, California. At fifteen years old, Paul was demonstrating with radical activist Abbie Hoffman and made an honorary member of the Black Panther Party. However, while studying Altered States of Consciousness at the University of Missouri, Paul had a miraculous experience hitchhiking in a remote area similar to the movie Field of Dreams. Paul re-thought his socialist and humanist world view and rejected it as completely false. Paul has devoted his life to communicating truth to people. Email: newmediavoice@aol.com