Anybody see anything problem with Americans being displaced from their own country both ethnically, linguistically and culturally?

In the past month, Congress carved up a Supreme Court justice’s life like a butcher might carve up a beef carcass.  U.S. Senators Diane Feinstein, Dick Durbin, Charles Schumer, Cory Booker and others lacerated Brett Cavanaugh’s impeccable life of integrity with cruelty of Jack the Ripper.  They trashed him on speculation.  They demeaned him via accusation.  They quartered him without “due process.”

At the same time, 535 members of Congress don’t mind hacking up America’ culture, tearing the underpinnings of America’s English language and ripping its ethos into millions of shards of foreign human imports.

Not a word from any of our leaders! Not a word from American citizens! Not a peep from top media people watching the invasion of America by millions of foreigners!

At the current rates of Mexican-Latino-Hispanic immigration into the United States and their extraordinary birth rates, Mexicans will become the new 51 percent majority ethnic group in America by 2042 according to www.PewResearchCenter.org.

While Brett Kavanaugh, along with his wife and kids, watched his life torn to shreds by an accusation, Congress failed to lift a finger to stop 22 to 25 million illegal alien border jumpers racing across our borders for the past 30 years.

In fact, the Mayor of Minneapolis, MN promotes illegal aliens:

The signs will be in both English and Spanish, and will be displayed in all of the city’s squad cars.

“Right now, cities have to step up and do what our federal administration and Congress won’t,” Frey said at a press conference Wednesday. “We will not let this lack of compassion at the highest levels of our government prevent us from doing what is right for our immigrant communities here in Minneapolis.”

“They will make it clear that you don’t have to answer questions about where you were born, your immigration status, whether you are a citizen and that you have the right to remain silent,” he explained.

In other words, Frey breaks federal laws. If you promote illegality and crime, you receive more of it.  When you harbor criminals, you produce more of them.  Given enough time, you too, become a failed state.

Within 24 years by 2042, European-Americans and African-Americans expect to become major minorities in their own country.  Has anyone seen the likes of a complete devolvement of one country’s culture, language and ethnic makeup degenerated into hundreds of competing cultures?

How can so successful a country be disenfranchised into everybody else’s country?  All within less than 70 years?  Are you, as an American ready for this future?  What actions do you plan to take to stop it or do you approve it—so you just let it continue?

Has any country in history survived such a peaceful invasion-takeover?

Definition of slogan: ”Immigration Shutdown Now means the American people want a total shutdown on all legal and illegal immigration. That means we want all illegal immigration stopped by arresting, prosecuting and jailing employers of illegal aliens. We deport all illegal aliens by taking their jobs away and as we catch them.  We want English mandated as our national language. We demand a cessation of Muslim immigration in order to protect our culture, language and way of life. We can’t save the world but we can save or destroy our civilization.  We demand a stable population that allows everyone to live, work and thrive into the 21st century. Especially our children.” FHW

(Permission to republish this population graph by Roy Beck, www.NumbersUSA.org )

Muslims cannot in any way become Americans. The Koran forbids it.  Their entire context of religious-political Sharia Law demands subjugation to their religion with no allegiance to the U.S. Constitution. The Koran forbids women’s rights, marital choice, free speech, gay rights and religious rights.  Our way of life remains completely out of bounds to Islam. This 15-minute video explains our plight:

Katie Hopkins Has A Message For America, applies to whole world… – YouTube

That’s why you need to take action. Send this series to everyone in your network. Educate them.  Urge them to take action by joining these websites to become faxers of prewritten letters and phone callers.  We must force Congress into an “Immigration Shutdown Now!”

In a five minute, astoundingly simple yet brilliant video, “Immigration, Poverty, and Gum Balls”, Roy Beck, director of www.numbersusa.ORG, graphically illustrates the impact of overpopulation.  Take five minutes to see for yourself: 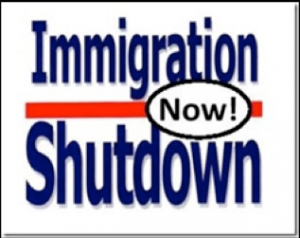 Take action by joining for free: