Our great democracies still tend to think that a stupid man is more likely to be honest than a clever man, and our politicians take advantage of this prejudice by pretending to be even more stupid than nature made them. —Bertrand Russell

It’s not an endlessly expanding list of rights — the ‘right’ to education, the ‘right’ to health care, the ‘right’ to food and housing. That’s not freedom, that’s dependency. Those aren’t rights, those are the rations of slavery — hay and a barn for human cattle. —Alexis de Tocqueville, French aristocrat, diplomat, political scientist, political philosopher and historian.

The following 13-minute video was recorded in Shelby County, Tennessee which includes the incorporated cities and towns of Memphis, Arlington, Bartlett, Collierville, Germantown, Lakeland and Millington.

The recording shows people being restricted from entering a school board meeting by police, many because they are not masked.  It so reminds me of the East German Stasi who were ordered to kill those who tried to climb the wall, tunnel under or balloon ride to freedom to West Germany.  No, it’s not that bad, but this is how it starts.

The Rumble Video can be seen here.

There are a number of folks gathered outside the building and one officer speaks to them several times.  Throughout the video, he touches and adjusts his face diaper time and again.  Every time he touches that mask, he infects it with more bacteria and then breathes it into his lungs.  Dr. Richard Urso who spoke at America’s Frontline Doctors White Coat Summit commented that he wished masks worked, but there are zero randomized control trials in the last four decades that masks stopped the spread of respiratory illness.

This officer stated that school security is in charge of who comes in and who comes out.  What?!  Every parent who wants to attend the school board meeting should be allowed to.  Folks with medical exemptions for masks were not even allowed to enter.

The section for public comment at this public meeting has been disallowed to the people who will not follow and obey the orders of the hierarchy of Shelby County.  Many of the officers actually turned their badges around so you could not read their names or their badge numbers.  When asked for their names and badges, they walked away.  When police were inside the building, they were told to adjust their cameras and turn off the audio so the parents outside could not hear what was being said. 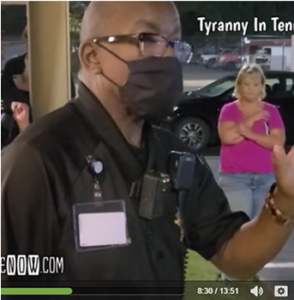 These parents were denied entrance to a public meeting that affects their own children.  And just who created the mask mandate?

Police Officer Thornton told the people he was going by the executive order of the Health Department of Shelby County.  Therein lies the truth.  This officer is just taking and following orders to keep his job, despite the order being constitutionally false.  We are seeing clearly throughout the country and even in Red States, control by those who were never elected.

In Charlotte Iserbyt’s 1999 book, The Deliberate Dumbing Down of America, on page 134, she exposes the truth of communism and the unelected powers who rule.  (NewsWithViews.com has only 10 copies of this valuable book left.)

Her book states the following:

The Daily World of November 8, 1975 carried a very interesting article entitled “Planning is Socialism’s Trademark” by Morris Zeitlin.  The Daily World(newspaper of the Communist Party USA) was formerly known as The Daily Worker and was founded in 1924.  The importance of this article lies in its blatant admission that regionalism, which is gradually becoming the accepted method of unelected governance in the United States (unelected councils and task forces, participatory democracy, public-private partnerships, etc.) is the form of government used in democratic socialist and communist countries.

I beg of my fellow Americans to wake up and smell the decay of our Republic…we are dying.  The only thing that will save us is if more people like the folks in this video stand up and demand the freedoms God gave us and our founders recorded in both the Declaration of Independence and our Constitution and especially our unalienable Bill of Rights.

Stand for freedom, or ultimately, we’ll be on our knees in slavery.