U.S. Voters Flee From The Democratic Party, Re-Register With GOP

On the night of Nov. 8, 2016, a number of news reporters and anchors working for the likes of ABC, NBC and CBS News, as well as CNN, CNBC, MSNBC, and other cable news networks were visibly shocked when they saw on their fancy election tally boards that a once Democratic stronghold voted in droves for Donald Trump thereby abandoning the favored Hillary Clinton.

Some of the men and women who populate American newsrooms found themselves — with tears in their eyes – having to declare Trump the winner of Pennsylvania’s 20 electoral votes, with Pennsylvanian voters carrying the multi-billionaire beyond the 270 electoral votes he needed to win the presidency.

“There were scattered reports of voting machine glitches in Pennsylvania, where some voters said they tried to vote the Republican ticket only to see the Democratic boxes checked on their touchscreen,” said CNBC’s Antonio Jose Vielma..

The Democratic Party elite, their voters and their media cheer leaders expected the dark Blue State of Pennsylvania as a key state in the election night battle with Hillary Clinton winning Pennsylvania while Trump counted his electoral victories in other battleground states.

Trump was also the winner in Florida, Ohio, North Carolina and other key battleground states, increasing his number of electoral votes over Hillary Clinton, who believed – along with the vast majority of news business editors, anchors, reporters and news writers — she was a shoe-in for the Presidency. The bombastic former First Lady also abandoned her husband Bill’s policies and ideas while displaying her radical left history especially during her university and law school years.

Get-out-the-vote efforts have been intense in the battleground state of Pennsylvania. But most of the state’s African-American residents said they were contacted about voting by only one candidate during the campaign: Democrat Hillary Clinton. 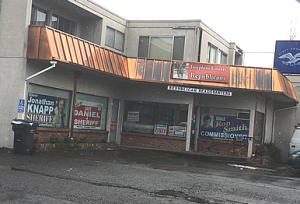 Paul Walter is holding down the Josephine County Republicans Office in Grants Pass, Oregon every Friday from 10 AM to 3 PM. Walter says that people are coming in asking him if he can re-register them as Republicans.  “Why do you want to become Republicans” asks Walter. They replied, “My wife and I have been Democrats for over 40 years and what the Democrats are doing to Mr. Trump is disgraceful and we can no longer be part of that.” Walter replied “that is wonderful news but, be careful there are lot of Democrats in the Republican Party, we call them RINOs.” Citing John McCain, Paul Ryan or Jeff Flake as example. It’s easy to recognize them because they believe in big government, big taxes and they also hate Trump.

Nearly 100,000 Pennsylvania Democrats have switched to Republican since the beginning of the year. What’s more: The Pennsylvania Republican party says more than 240-thousand new voters have joined the party since last November.

The state Republican party says that the surge in Republican registrations is nearly twice the number of newly registered Republicans compared to both the 2008 and 2012 numbers combined. 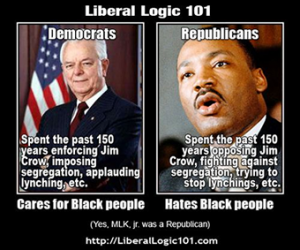 During the 1860s, Republicans, who dominated northern states, orchestrated an ambitious expansion of federal power, helping to fund the transcontinental railroad, the state university system and the settlement of the West by homesteaders, and instating a national currency and protective tariff. Democrats, who dominated the South, opposed these measures. After the Civil War, Republicans passed laws that granted protections for African Americans and advanced social justice; again, Democrats largely opposed these expansions of power.

Sound like an alternate universe? Fast forward to 1936. Democratic president Franklin Roosevelt won reelection that year on the strength of the New Deal, a set of anti-Depression reforms including regulation of financial institutions, founding of welfare and pension programs, infrastructure development and more. Roosevelt won in a landslide against Republican Alf Landon, who opposed these exercises of federal power.

Eric Rauchway, professor of American history at the University of California, Davis, pins the transition to the turn of the 20th century, when a highly influential Democrat named William Jennings Bryan – a die hard liberal famous for fighting a law regarding Charles Darwin’s Evolution blurred party lines by emphasizing the government’s role in ensuring social justice through expansion of federal power — traditionally, a Republican stance.

Republicans didn’t immediately adopt the opposite position of favoring limited government. “Instead, for a couple of decades, both parties are promising an augmented federal government devoted in various ways to the cause of social justice,” Rauchway wrote in a 2010 blog post for the Chronicles of Higher Education. The party’s small-government platform cemented in the 1930s with its heated opposition to the New Deal.

But why did Bryan and other turn-of-the-century Democrats start advocating for big government? According to Rauchway, they, like Republicans, were trying to win the West. The admission of new western states to the union in the post-Civil War era created a new voting bloc, and both parties were vying for its attention.

In the early 20th Century, Democrats sold themselves and their party to western voters. Republican Party leaders 1860s and 1870s had visibly favored businesses and business leaders based in America’s northeast. Republican politicians gained support  from the banks, railroads and manufacturers, while small-time farmers like those who had gone west received very little attention and gravitated to the Democratic Party.

Both parties tried to exploit the discontent this generated, by promising the little guy some of the federal largesse that had hitherto gone to the business sector. From this point on, Democrats stuck with this stance — favoring federally funded social programs and benefits — while Republicans were gradually driven to the counterposition of hands-off government.

“At one point, the Republican leaders throughout the nation began to embrace libertarianism, a political philosophy that espouses ultra-limited government,” said political strategist Mike Baker.

“While most libertarians support gun ownership, oppose abortion, and have shown they share some of the conservatives’ GOP agenda, they are almost religious about their opposition to ‘foreign entanglements,’ government drug enforcemenf, and other big-government agencies,” Baker said on Thursday.

“The Democrats, at least for a while, appeared to splinter – i.e. Dixiecrats – and today, once again find their party in a shambles complete with loudmouthed politicians who attacked those they would have endorsed and political action committees and non-profit groups who were and are radical to the point of being accused of treason by their more conservative rivals in the Republican Party,” noted

From a business perspective, Rauchway pointed out, the loyalties of the parties did not really switch. “Although the rhetoric and to a degree the policies of the parties do switch places,” he wrote, “their core supporters don’t — which is to say, the Republicans remain, throughout, the party of bigger businesses; it’s just that in the earlier era bigger businesses wanted bigger government and in the later era they don’t.”

In other words, earlier on, businesses needed things that only a bigger government could provide, such as infrastructure development, a currency and tariffs. Once these things were in place, a small, hands-off government became better for business,” claimed Rauchway.