Hello everyone.  I have been looking into worldwide corruption for 45 years.  Why do we keep choosing corruption over liberty?  Especially with all the evil going on today. As it gets worse and worse, I was brought to remember something I read years ago in “Occult Theocrasy” by Lady Queen borough. Yes, we are in a battle of Truth vs Opinion but more important this is a spiritual war, a battle to the death,for the flesh and blood of humanity.  The lie starts out with a gang of Nimrods caring and offering help to make life easier as a mighty provider in the face of God.

Come all ye that are tired and hungry enjoy our abundance, and our (second to none) protection, Enjoy the shade of easy living. We will keep you safe from all harm just make US rulers over you.  So went the temptation of men ruling over men and away from God’s rules for Liberty.  The base of the Umbrella Tree feed the false world empires.  It starts with the “something for nothing” fraudulent (money system) that feeds all their delusions. Below that is evil that directs which gang is needed in their destructive scheme. 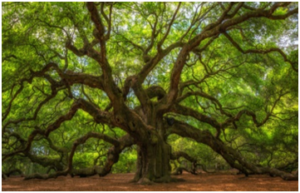 There are many governments, gangs, perverts, and thieves of all kinds among the branches some seeming very good. Enjoy the vice of your choice all will be fine.  This Marvelous scheme to control and live off of man is to offer their Occult tree of life for your fealty and ever-increasing cost of the labor of your life. All that they promise is what they take from us and it never stops.Everything under the Umbrella Tree is designed to keep you an un-aware slave of the theocracy. Along with real wolves there are very many wolves wearing sheep’s clothing none of which care about you or liberty.One of their goals is to grow this Umbrella tree to cover the earth concealing truth of another way, the way of truth.  The Way of truth is the only way where men do not rule over other men.

Well, it’s time to get to the meat of the matter.  The definitions given are here to make things clearer for all involved.

OCCULT: Hidden from the eye or understanding; being concealed.  (If you knew what was going on they would be brought before the people’s bar.)

THEOCRACY:  Government by direction of God or by the assumed direction of a supposititious divinity, or the state thus governed.(They tell you it’s we the people but each day proves the people have NO say.)

OCCULT THEOCRACY: By concealment claiming or bearing authority over men from God or some god or from men as in WE THE PEOPLE. The power of theocracy or exercise of government rule over the masses by a hierarchy of priests or adepts with rules from the leaders of the particular secret society.

Part of their concealment is to have their branches set in degrees. Like the pagans of old they have temple virgins and temple whores.  Some people join one or more of these secret cults to network, do good as a group and for better lives.  Others join to get into the upper workings of the group.  If you or anybody you know is in such a group beg them to get out.

Wars are a way to keep people in line and keep other cults from growing larger to heights of power beyond their scope. All cults are part of the team of deceptions and will work together to control and feed off the masses, which sometimes for the elite its pronounced with a silent m.  Most financial aid is directed to the occult branches to keep their people in line.From below, deep in the roots they will build up the sect needed to implement the next wicked goal.  See Georgia Guild Stones erected in 1990 but being carried out now right before our eyes.

LICEN´TIOUSLY, adv. With excess of liberty; in contempt of law and morality.

Now here are the words from the book mentioned earlier.

“Miss Mayo, in her book Mother India, published in 1927, gives an interesting description of a temple of Kali. “Kali Ghat” — place of Kali — is the root-word of the name Calcutta.” Kali is a Hindu goddess, Heckethorn, Secret Societies of all Ages and Countries, vol. II, p. 307. 62 OCCULT THEOCRACY wife of the great god Siva, whose attribute is destruction and whose thirst is for blood and death-sacrifice.”  (Doesn’t that reminds you of Hillary,) Kali has thousands of temples in India, great and small. Heckethorn further explains that ” the association of Thugs, after having existed in India for centuries, was only discovered in 1810. The names by which the members were known to each other, and also to others, was Funsiegeer, that is, ‘ men of the noose‘. The name Thug is said to be derived from thaga, to deceive, because the Thugs get hold of their victims by luring them into false security. One common mode of decoying young men having valuables upon them is to place a young and handsome woman by the wayside, and apparently in great grief, who, by some pretended tale of misfortune, draws him into the jungle, where the gang are lying in ambush, and on his appearance strangle him. The gang consists of from ten to fifty members; and they will follow or accompany the marked-out victim for days, nor attempt his murder until an opportunity, offering every chance of success, presents itself. After every murder they perform a religious ceremony, called Jagmi; and the division of the spoil is regulated by old-established laws — the man that threw the handkerchief gets the largest share, the man that held the hands the next largest proportion, and so on. In some gangs their property is held in common. Their crimes are committed in honor of Kali who hates our race, and to whom the death of man is a pleasing sacrifice. 24 “Kali, or Bhowany, for she is equally well known by both names, was, according to the Indian legend, born of the burning eye which Shiva has on his forehead, 24. Heckethorn, op. cit., p. 318, vol. II. BRAHMINISM 63 •whence she issued, like the Greek Minerva, out of the skull of Jupiter, a perfect and full-grown being. She represents the Evil Spirit, delights in human blood, presides over plague and pestilence, and directs the storm and hurricane, and ever aims at destruction. She is represented under the most frightful effigy the Indian mind could conceive; her face is azure, streaked with yellow; her glance is ferocious; she wears her disheveled and bristly hair displayed like the peacock’s tail and braided with green serpents. Her purple lips seem streaming with blood; her tusk-like teeth descend over her lower lip; she has eight or ten arms,sometimes a human head dripping with gore. (Does that not remind you of sweet Cathy holding Trump’s head,)With one foot she stands on a human corpse. She has her each hand holding some murderous weapon, and temples, in which the people sacrifice cocks and bullocks to her, but her priests are the Thugs, the ‘ Sons of Death ‘, who quench the never-ending thirst of this divine vampyre.” 25 As regards the sect of Kali’s worshippers, Hecke-thorn gives the following details: “A newly admitted member takes the appellation of Sahib-Zada. He commences his infamous career as lughah, or gravedigger, or as belhal, or explorer of the spots most convenient for executing a projected assassination, or bhil. In this condition he remains for several years, until he has given abundant proof of his ability and good will. He is then raised to the degree of Bhuttotah, or strangler, which advancement, however, is preceded by new formalities and ceremonies. On the day appointed for the ceremony, the candidate is conducted by his guru into a circle, formed in the 25. Heckethorn, op. cit, vol. II, p. 318 and, for recent corroboration, see Katherine Mayo, Mother India. 64 OCCULT THEOCRASY sands and surrounded by mysterious hieroglyphics, where prayers are offered up to their deity. The ceremony lasts four days, during which the candidate is allowed no other food but milk. He occupies himself in practicing the immolation of victims fastened to a cross erected in the ground. On the fifth day the priest gives him the fatal noose, washed in holy water and anointed with oil, and after more religious ceremonies, he is pronounced a perfect bhuttotah. He binds himself by fearful oaths to maintain the most perfect silence on all that concerns the society, and to labor without ceasing towards the destruction of the human race. He is the rex sacrificulus, and the person he encounters, and Bhowany places in his way, the victim. Certain persons, however, are excepted from the attacks of the Thugs. ” 26 The political significance of such a sect in any Theoc-rasy can be easily understood when one realizes what it means to the rulers of a land to have at their disposal a staff of fanatics trained to kill anyone on the order of a priest! The utility of such organizations is obvious in a hierarchy where the rulers are also priests reigning by “Divine Right”.

All this and there’s so much more, is not intended to frighten, but so that you realize you’re under the wrong tree or covering.  We are fallen beings, and if you seek peace and liberty, you must repent and get out from under the accursed umbrella tree. Don’t expect the Lord to pull you off of your perches, you must repent and turn to Him.  We have been living under the biggest satanic con of all time.Please be aware that the republicans, although look good, are just another branch of the tree, a fallback position, they can’t and won’t save you!All the false leaders need you more than you need them.  Come out from among them and be ye separate, as for me and mine we will follow the Lord.  Here are three pastors that explains just how the Kingdom of God works with-in this sinful world.

If you would like a part two,(this could be a book), or if you have any questions, please let me know.

[BIO: Paul Cappadona is the Author of Taking Back America the Party’s over.]