Diffusing the present dangerous confrontation between Islam and the West demands rational, impartial, and cool heads to untangle facts from myth, and understand the Muslim mindset. We need to focus on the general mindset of Muslims which bears heavily on the hostility toward the West — a serious hostility that may bring about the dreaded Armageddon. 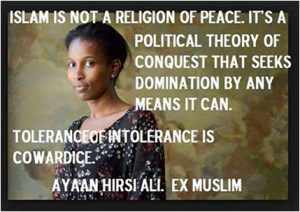 The Muslim’s mind is imprinted with authoritarianism which starts with the supreme authority, Allah, through his one and only prophet, Muhammad, his Caliphs or Imams, and the high-ranking religious divines all the way down to the village clergy. This authoritarian mentality encompasses all aspects of life for the Muslim: the king and his dominion as the viceroy of God, the Amir and his despotic ways, the Khan and his unchallenged rule over the tribe, the village headsman and his extensive power, and finally the father and his iron grip at home over the women and children. All these authority figures are male.

The authoritarian type possesses numerous problems and presents many ramifications — ramifications much too important and complex to be comprehensively treated here. For now, it is important to understand that a person with the authoritarian personality is an extremist. He can be docility itself under certain circumstances and a maniacal murdering brute under others. He is the type who would just as happily kill, or die, when he is directed to do so. He would, for instance, gladly strap on an explosive vest, in obedience to a superior’s order, and detonate it in a crowd of innocent civilians without the slightest hesitation.

A dangerous feature of the authoritarian personality is the relative lack of independent thinking. This deficiency makes the person highly amenable to manipulation. Islam, by its rigidly authoritarian makeup, robs a Muslim of independent thinking to the extent that the believer blindly adopts it as his infallible system of belief. Hence, the “religion” of Islam is guilty of conditioning masses of people as easily manipulated instruments in the hands of authority figures.

Studies have shown that the authoritarian personality type can be found among all people, including Americans. And most religions rely on divine authority. The important difference is in the degree and prevalence of the condition. Islam breeds vast numbers of extremists, while in America, for instance, the prevalence is significantly lower and less severe. 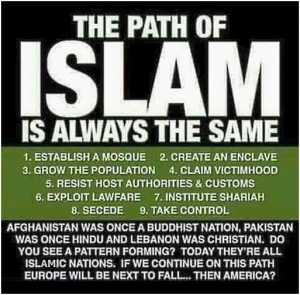 Focus on the goal

To Muslims, the goal is everything. Islam condones any and all means to achieve its goals. The ultimate objective of Islam is the rule of the entire world under the Islamic Umma — never mind that these life-in-hand soldiers of Allah disagree with one another regarding the Umma itself and who is going to reign over it. That’s a “family dispute” that they will resolve by their usual favorite method — brute force.

Each Islamic sect believes that it has the Prophet and Allah on its side and that it will prevail over the others. For now, they have to work diligently to achieve the intermediary goal of defeating all non-believers. There are countless instances that substantiate Muslims’ “end justifies the means” guiding principle. This policy dates back to Muhammad himself. Muhammad repeatedly made peace covenants with his adversaries, only to violate them as soon as he was in advantageous position to do so. Betrayal, deception, and outright lies are fully condoned in furthering the work of Islam. In the present-day world, the work of Islam is defined by a deeply entrenched and influential clergy who issue fatwas — rulings — that become directives and laws to the faithful.

Khomeini, the founder of the Iranian Islamic state, for one, made extensive use of the fatwa. Widely-known in the west is Khomeini’s fatwa condemning Salman Rushdie to death for his book. A less-known fatwa of Khomeini during the last Iran-Iraq war led to the slaughter of thousands of Iranian children. Children, nearly all under fifteen years of age, were given plastic keys to paradise as they were commanded by the fatwa of the imam to rush forward to clear minefields for the tanks to follow. The Islamic murderers, in obedience to the fatwa of a bloodthirsty man of Allah, had no problem in deceiving the clueless lads clutching made-in-China plastic keys to paradise.

Such is the existentialistic threat of Islam. It is a rigid stone-age authoritarian system with a stranglehold over many of the nearly one and a half billion people under its command.

One of the great subtle, yet important differences between the Muslim’s mindset and that of the people in the West is the extent to which Muslims are fatalistic. There is hardly a statement that a Muslim makes without being conditional — conditional on the will of Allah. “I shall see you tomorrow, Allah willing,” “You will make it home, Allah willing,” “Things will work out, Allah willing,” and on and on and on. To the Muslim, Allah is on the job — on every job. Allah, with his invisible mighty hand, literally does and runs everything. “Allah’s hand is above all other hands” adorns every imaginable space in Islamic lands — a telling point about the Muslim’s fatalism and submission to the omnipotent, omnipresent hand. If something happens, it is Allah’s will. If it doesn’t, it is Allah’s will. The rank-and-file Muslim has little will of his own. It absolves him of any and all responsibility. This mentality is in stark contrast with the “take charge” and “can do” mental characteristics of Americans and others.

People as a group or as individuals are different, and no one is perfectly healthy psychologically. We all have a loose wheel or two as we travel the bumpy road of life. Yet most people manage to stay on course most of the time, with perhaps a stop or two at the repair shop of a mental health professional.

Most psychological disorders are exaggerations, deficits or surfeits of the generally accepted norm — whatever the norm may be. When caution, for instance, is practiced past suspicion, then we have paranoia; when reasonable fear is exercised beyond any justification, then there is phobia. The degree and severity of a condition frequently determine the presence or absence of psychopathology.

Muslims share a common Islamic psychological milieu: They are on an Islamic “diet,” whether they live in Islamic lands or in societies predominantly non-Islamic. The psychological condition of any Muslim group or individual is directly dependent on the kind and amount of Islamic diet they consume. The Islamic diet has numerous ingredients — some of which are wholesome, some toxic, and some between the two extremes. 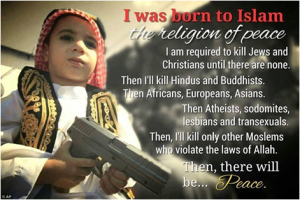 Over the years, Islamic leaders have found it expedient to feed the masses mainly the toxic ingredients to further their own interests. Individuals and groups, for instance, have used the immense energizing power of hatred to rally the faithful, the cohesive force of polarization to create in-group solidarity, and the great utility value of blaming others for their real and perceived misfortunes. Jews have been their favorite and handy scapegoats from day one. To this day, as true fascists, like the Nazis, Muslims blame just about everything on the Jews.

Providing a comprehensive inventory of the psychological profile of the Muslim is beyond the scope of this essay. Yet there is no question that the psychological makeup of a Muslim, depending on the extent of his Muslim-ness, is different from that of non-Muslims. This difference, often irreconcilable as things stand presently, is at the core of the clash of Islam with the West.

Admittedly, the non-Islamic culture is no panacea. It has, however, one outstanding feature the Islamic culture lacks — it allows for liberty with all its adherents, good, bad, or indifferent. For those who have experienced liberty, no inducement is likely to make them give it up — particularly not the fictional promises of the Islamists that have failed in the past and are doomed to fail even more miserably in the future.

The best, yet most difficult resolution of the conflict is to do what hundreds of thousands of (Iranian) Muslims have already done. They have abandoned the slaveholder Islam: They broke loose from the yoke of the exploitative clergy, renounced Islamofascisim, purged the discriminatory and bizarre teachings in the Quran and the Hadith, and left the suffocating tent of dogmatic Islam for the life-giving expanse of liberty.

Within the emancipating and accommodating haven of liberty, those who wish to still remain Muslim can retain and practice the early Meccan teachings of Islam (Muhammad led the life of a teacher and prophet. In Medina, he used the threat of the sword to compel people to convert to Islam) but renounce intolerance, hatred, and violence.

It takes great effort and courage to ascend from the degrading pit of slavery to the mount of emancipation. Yet it is both possible and exhilarating to do it, since many have done so successfully and happily. As more and more people leave the shackles of Islamic slavery, more and more will follow, and the long-suffering Muslims, victimized by Islam itself for far too long, will be a free people in charge of their own life and destiny. It is a painful process of growing up, of asserting one’s coming of age, and marching in lockstep with the free members of the human race.