Unhinged Maxine Waters Leads The Left In Calling For Anarchy

I want to remind the viewers that people like Nancy Pelosi and Barack Obama endorsed the Occupy Wall Street movement which is actually full of anarchists. —Kati Pavlich

Political language, and with variations this is true of all political parties, from Conservatives to Anarchists, is designed to make lies sound truthful and murder respectable, and to give an appearance of solidity to pure wind.  —George Orwell

The Intolerance of the “Tolerant” Left

Congresswoman Maxine Waters (D-CA) openly called for people to form a mob and physically confront members of Donald Trump’s administration if they see them out in public.  She took this action after the controversy over separated migrant families erupted but she never mentions that the law requires separating illegals from their alleged children and has for decades upon decades through previous administrations.  She only blames Trump.

Waters, who doesn’t live in the district she represents and paid her daughter $75,000 for Democratic 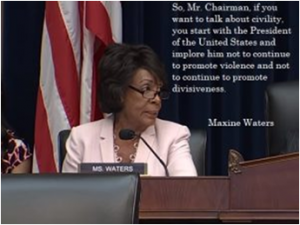 fundraising activities, said to a crowd at a “Keep Families Together” rally in late June, “If you see anybody from that Cabinet in a restaurant, in a department store, at a gasoline station, you get out and you create a crowd and you push back on them, and you tell them they’re not welcome anymore, anywhere.”  Really Maxine?  Talk about intolerance and discrimination, and you’re claiming President Trump is promoting violence and divisiveness?

Congresswoman, it is you, the entire left, including Black Lives Matter, Antifa and other far left organizations who are the ones promoting savagery and hostility.  Churchill said, “The fascists of the future will call themselves anti-fascists.”

Please people, support Omar Navarro against this psychotic and unhinged agent of Saul Alinsky, the community organizer, anarchist and trafficker of anti-American tactics.  Alinsky’s first book, Rules for Radicals was dedicated to the first radical, Lucifer.

The 1828 Noah Webster dictionary has the best definition of anarchy/anarchist.  An anarchist is one who incites revolt and promotes disorder in a state.  Anarchy is a state of society when there is no law or supreme power, or when the laws are not efficient, and individuals do what they please with impunity; political confusion.

“And because iniquity shall abound, the love of many shall wax cold.” Matthew 24:12

Here is a list of attacks against conservatives for just one year, from June of 2016 to June of 2017, but this lack of civility and decency to fellow Americans is now far more common.

In June of 2017, Huffington Post actually published a piece by contributor Jason Fuller calling for the execution of Donald Trump.  Then there’s a former professor who attacked seven conservatives hitting them in the head with a bike lock who received only three years’ probation rather than prison time for felony assault.  One victim had to have five staples to close the wound.

Add the latest, Sarah Jeong who currently works at the Vox Media site The Verge, was hired by the Times editorial board to work on technology issues. Shortly after the hire was announced, conservative publications dug up old tweets of hers containing statements like “white men are bulls**t” and “oh man it’s kind of sick how much joy I get out of being cruel to old white men.”

To some conservatives like National Review’s David French and New York magazine’s Andrew Sullivan Jeong’s tweets are bigger than her: They reveal a rot in the progressive movement, that “social justice warriors” have become totally okay with racism so long as it’s directed at white people.  Of course, there’s a leftist double standard when it comes to social media transgressions…unlike Roseanne Barr, Jeong won’t be fired.  She has however had to apologize and delete her tweets. 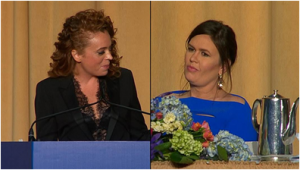 Haven’t we seen this over and over again where the hate spewing left does what they please with impunity?  Where restaurants toss guests because they disagree with their political beliefs, where actors promote pedophile harm to the president’s son, and where now that same washed up actor is promoting democratic voter fraud to destroy Trump…where the White House Correspondence Dinner included so-called comedian Michelle Wolf who attacked Press Secretary Sarah Sanders for the way she looked, and told Trump he wasn’t very rich.  Bet she doesn’t have $10 billion bucks.

Shawn Christy is accused of interstate communication of threats via Facebook, and threats against the President of the United States stating he will shoot the President in the head and kill any law enforcement who try to stop him.  The FBI and the U.S. Marshalls Service are seeking help from the public. [Link] The FBI has “allegedly” intensified their search. 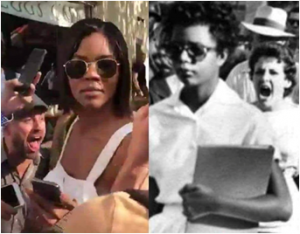 Candace Owens and Charlie Kirk while enjoying breakfast in Philadelphia were accosted by a mob of angry leftists, including Antifa thugs, who cowardly refuse to show their faces, most of whom are white. Protesters screamed phrases like “You’re a soft fascist!” and “F**k white supremacy!” at both Kirk and Owens.  Oh yes, scream white supremacy at a black woman!  Link

Candace tweeted, “Was this picture of a white Democrat using a megaphone to shout violent rhetoric into the ear of a black woman taken in 1965?  Nope!  It was taken today folks.  A picture is worth a thousand words.”

One of the protestors dumped a bottle of water on Charlie Kirk.

“If an angry conservative mob formed while two young liberals, one white guy and a black woman, were eating breakfast, and the mob hurled horrific insults, threw objects and assaulted them, the left would call it a ‘hate crime’ and every major outlet would be demanding condemnation,” Kirk tweeted.  Again, a double standard.

There are five rights in the First Amendment of the Bill of Rights of the U.S. Constitution.

Note the freedom to assemble peaceably.  We have seen unbelievable lawlessness, personal injuries and destruction time and time again and nothing is being done…no massive arrests, no fines, no prison time.

Today’s millennials have no comprehension of our God given rights.  In the following four-minute video, not one youth can name even one of the five rights stated in our First Amendment.

City officials in Portland, OR say they’ll be cleaning up the “disgusting” Occupy ICE camp after police cleared the area of protesters in late July 2018.

The mayor’s office said it would pick up a portion of the tab for the cleanup.  The Portland Police 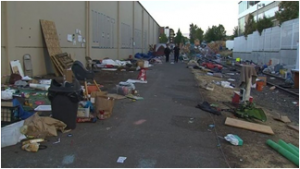 Bureau cordoned off the site calling it a biohazard.  It’s the taxpayers who have to pick up the tab Mayor, when it should have been the protestors who were forced to pay, but did anyone collect names…of course not.

The Occupy ICE activists set up camp near the local office of U.S. Immigration and Customs Enforcement (ICE) after an outcry over the agency’s crackdown on illegal immigrants.  A local resident who lived near the ICE office said he was, “Getting tired of waking up to the bullhorn and the sounds and the cussing.” 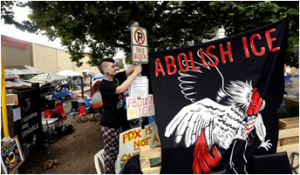 occasions in June to report protesters blocking entrances and exits, only to have their 911 calls go unanswered.  ICE agents claim the Oregon mayor created a zone of terror and lawlessness with the protestors. Link

The unanswered calls came after Mayor Ted Wheeler directed Portland police not to intervene on the first day of the protests.  He has denied claims by the union representing ICE employees that city police officers would not respond to their urgent calls for service during the occupation by protesters.

Through attorney Sean Riddell, the union criticized the mayor for his laissez faire approach to the protest at the local ICE field office, which lasted five weeks. When the protest began, Wheeler announced that he would not allow Portland police officers to be “sucked into a conflict” over the protest and said federal police would be responsible for protecting their own building and property.

Riddell’s complaint was that Wheeler was “forbidding” officers from responding to ICE employees’ calls and had “created a zone of terror” for workers at the field office.

The Washington Times reported that the National ICE Council, which represents around 7,600 ICE agents and staff members, said in a letter to the city on Monday that Mayor Ted Wheeler (D) had “turned the lives of our employees over to an angry mob.” 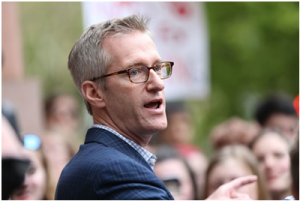 “The mayor stated publicly that he supported the protests, which were supposed to be about protecting immigrant families. But what about the moms and dads that we had working in that building? What about their kids?” Chris Crane, the union’s president, told the Times. “These are questions that we’ll be expecting the mayor and city of Portland to be answering in the days to come.”

The situation quickly spiraled out of hand, growing from a small group of protestors into a massive “occupy” encampment that shut down ICE’s rented building from June 20 to June 28, when federal police gathered enough manpower to retake control. The encampment continued for weeks afterward.

Mayor Wheeler finally turned on the protesters and ordered them to disband.

While the protesters’ story has been well-documented, the ICE employees who were first trapped inside their building, then later were blockaded from entering it for a week, have not gotten as much attention.  Now they are beginning to talk about the harassment they faced even when outside the office.

Michelle Wolf is No Comedian

Leftists like Democrat Michelle Wolf have no clue of what ICE does to protect the American people.  Abolishing ICE would mean open borders because it would eliminate the agency responsible for removing people who enter or remain in our country illegally, including drug dealers; gang members; and child molesters, rapists, and other sex offenders.

The left has spun out of control, their rage has consumed them, their logic is gone.  The likes of Maxine Waters, Sen. Liz Warren, Sen. Kirsten Gillebrand and Sen. Kamala Harris along with their Democratic brothers and sisters show the desire to destroy the representative republic. Their goal is to make us a third world country beholden to none but the enemies of life, liberty and the pursuit of happiness, the latter of which was originally John Locke’s “the pursuit of property.”

We are inundated with communists on the left who wish to destroy this Republic and they are moving as they’ve never moved before because they hate our outsider President who wishes to truly Make America Great Again.  Their goals and beliefs have become all too obvious to anyone in the electorate who actually pays attention.  We are in a battle for the God given rights of the people…those rights our founders understood…but the communist infiltrators wish to totally destroy.

One has to wonder if FBI Agent Peter Strzok’s “insurance policy” will work to destroy our president.  Obviously, none of these godless people have a clue of “Do unto others…”

If we lose, our descendants will pay a debilitating price for our failures.

P.S. Dear readers of NewsWithViews.com, our writers long for our long-lost American freedoms.  Our CEO escaped a communist country and he well knows the difference between freedom and chains.  This is why he fights to save the last bastion of freedom in the world, the United States of America.  Please help us to keep NewsWithViews coming into your mailbox every day.  Please support us monthly with your donations and help to save our beloved country.  Tell your friends to sign up on the website for daily emails from NWVs and remember us in your prayers.