The Black Panthers small mob, armed with AR 15 Rifles, stood menacingly near the voting area, where Georgia black democrat woman, Stacy Abrams, placed her bid to be the Governor of Georgia.

She was backed by famous New Age practitioner Oprah Winfrey, a billionaire, who was pushing her for that office, which would make her the first black governor ever.

To power that point, Oprah invoked racism, hatred and lynchings, things that took place a hundred years ago in her monologue supporting Abrams. Isn’t it time to update the monologues? People are sick of the same ole-same ole.

Readers will remember how a few elections ago, the armed uniformed Black Panthers intimidated Republican voters, meaning that only democrats, should be elected…or else. This is the United States of America! This is the voting style in 3rd World countries, but not here. Get a grip! 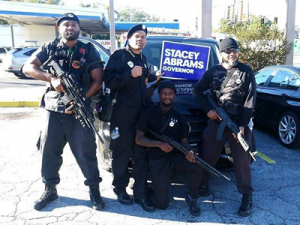 In this case as well, the police did not come, arrest them and charge them with interference of voting. This is nuts!  Plus Dereliction of Duty by the police, meaning,  failure, through negligence or obstinacy, to perform a legal or moral duty to a reasonable expectation.
Even though reports were made, the police did nothing, did not even respond by coming to the area to break up that threatening mob. Yet the Black Panthers posed confidently in front of the voting place with their guns, making eye contact with all they could, as voters entered the voting area. The Panthers’ faces were stern with a touch of mean, posture erect, with their rifles in hand.
Particularly interesting, Stacy Abrams was a staunch backer of confiscating all AR 15 Rifles from citizens, making those weapons illegal to own, but what a different attitude when those guns are being used to help her get voted into the office of governor. Typical Democrat hypocrisy.
However, voters walked past the Panthers and into the voting area and voted for Brian Kemp, who is now the governor elect. Even so, Stacy Abrams refuses to concede that she lost the election. She is throwing a hissy fit and demanding a recount of the ballots. This has the fingerprints of a typical George Soros event.
Since Soros owns the so-called Main Stream Media, it was expected that they would not print one thing about the Panther’s voter intimidation. The only truthful news one can get is from the internet Citizen Journalists.
For example, NewsWithViews.com, RenewAmerica.com, AmericanProphet.org, iPatriot.org, OliveBranchReport.com, Exposing Modern Mugwumps.com www.revaustinmiles.com, and CapitolHillOusider.com, just to name a few.
Through these citizen sites, you will learn exactly what is taking place all over the world. And take TV news with a grain of salt. This will give you an idea of what is happening but don’t take any of that as gospel, but check the internet news sites to find out the real story and what and who is behind it.
Stacy Abrams indeed has earned her status. She is now the only black woman to be a candidate for that office. So she did earn one recognition which should boost her ego.
Photo Caption: Black Panthers Intimidating Voters in Georgia
ANALYZING TODAY’S NEWS FOR TOMORROW’S HISTORY