United States Attorney for Connecticut John Durham, who was chosen by U.S. Attorney General William Barr to investigate the origins of the FBI’s investigation against President Donald Trump in 2016, is reportedly increasing his probe of former CIA Director John Brennan for his alleged corrupt politicization of intelligence gathering and analysis.

The Coronavirus emergency that’s caused enormous distress throughout the nation has led Durham to leave his offices in Connecticut and set up shop in Washington D.C. to continue his investigation, especially the actions of intelligence officials such as Brennan. 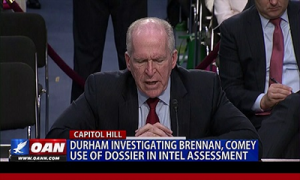 Trump selected Durham to be Connecticut’s top federal prosecutor in 2017. He was chosen many say because he isn’t political but is considered a tough prosecuting attorney.

The nation’s Top Cop, Barr, and the top Connecticut federal prosecutor, Durham, are looking into highly classified issues to ascertain whether or not Brennan — who is also accused of leaking intelligence to his future employers in TV news — took politicized actions to pressure the rest of the intelligence community to match his conclusions about Russian President Vladimir Putin’s motivations to help Trump beat Hillary Clinton for the presidency.

According to a federal law enforcement official, Durham and his staff of prosecutors and investigators questioned CIA agents and analysts, 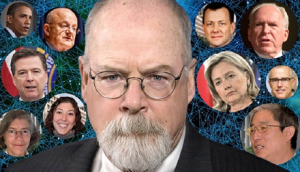 zeroing in on those at the National Intelligence Council, a center within the Office of then Director of National Intelligence James Clapper. “The NSC oversaw the collaboration between the CIA, FBI, and National Security Agency in putting together the 2017 assessment, and looking at how the results were muddled by Democrats in both houses of Congress,” said former Special Agent-In-Charge (SAIC) William “Billy” Collier of the now defunct Justice Department’s Immigration & Naturalization Agency. .

While Brennan’s CIA agents were allegedly “playing loose and fancy-free” with the evidence of “collusion” between Trump and Putin, the House Chairman of the Intelligence Committee, Rep. Adam Schiff, continuously claimed he had overwhelming evidence of Trump’s guilt,

but none of it materialized. If anything, said

After the CIA was hesitant to provide details to the NSA on the credibility of a source said to be close the Kremlin, the attorney began looking for evidence on whether or not John Brennan withheld critical information to intelligence agencies in order to create a negative preconceived notion about Trump and Russia relating to election interference in 2016.

According to One America News Network (OAN), Durham and his team have interviewed aa steady stream of individuals within the intelligence community. OAN’s Pearson Sharpe said the Durham team has also collected and read emails from the CIA, FBI, and the NSA.

A former CIA special agent claims that Durham plans to question John Brennan soon especially since Brennan has been “shooting his mouth off on the far-left news network MSNBC as its intelligence and national security analyst.”

The 69-year-old prosecuting attorney started his probe last year to review early actions of individuals in the intelligence community, but the Trump Justice Department has since expanded the probe into a full-blown criminal investigation. 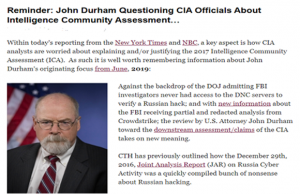