Using The 25th Amendment To Destroy Trump Won’t Work Either

The Establishment is in an uproar. Dirty trick after dirty trick has failed them. They were so sure Hillary would win! They were so sure they could control the narrative! They were absolutely positive that they would pull the levers of the Deep State and unseat Donald Trump with a relentless campaign of lawfare (warfare by lawyers).

President Trump has been a step ahead of them every time, so their Plan A – a recount followed by an attempted hijacking of the Electoral College failed, and their Plan B – “Deep State Soft Coup” is failing spectacularly. The failure to find any evidence whatsoever of Russian collusion means that Plan B has been a major dud. While special counsel Robert Mueller is still on course to bring some process-oriented charge against the President such as perjury or obstruction of justice, the exposure of his entire inquiry as a partisan witch-hunt makes his success in reversing the results of the last presidential election unlikely. As Pat Buchanan has pointed out, unlike Richard Nixon, Donald Trump will not go quietly.

That leaves them only a couple of plans left and each is more desperate and futile than the prior attempt. 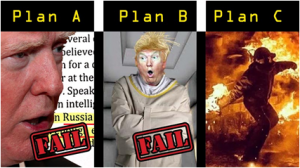 Plan C is clearly an attempt to unseat President Trump with histrionics of the POTUS being mentally unsound. A year ago, we warned you, gentle reader, that the Left would never accept Donald J. Trump as their President, and that they would do literally anything within their power to overthrow his 2016 election win. We coined the term, Leftist Spasm, to denote the involuntary and knee-jerk appearance of their dismay.

The Left is resilient and persistent, so their next plan, Plan C – “25th Amendment Solution” is now under full swing, but it won’t work either because Trump is in excellent health. Harpies in the media are jumping on every tweet, slip of the tongue, and unorthodox method as proof positive that the President has become unhinged.

The mainstream media chorus that began with CNN’s Don Lemon, MSNBC’s Joe Scarborough, certified nut- job Keith Olbermann, and first promulgated by Senators Robert Corker and Jeff Flake that Trump is mentally unbalanced picked up speed with the publication Author Michael Wolfe’s fictional book, “Fire and Fury”. Incredibly we now know that it was quisling Steve Bannon who let this hyena Wolfe into the Trump White House. It is essential to understand that this is the necessary backdrop for the Washington elite’s plan to take a Trump down under the 25th amendment. Their plan cannot succeed until they have whipped up a national hysteria that insists that the president is out of his mind.

The president’s recent crude but accurate depiction of certain third- world countries who would like to import their refugees to the United States as shitholes has given the Democrats and their handmaidens in the mainstream media a new talking point to use in their insistence that the president is nuts,

For those unfamiliar with the 25th Amendment: The Twenty-Fifth Amendment to the United States Constitution deals with succession to the Presidency and establishes procedures both for filling a vacancy in the office of the Vice President as well as responding to Presidential disabilities. It has four sections, the first three deal with the Vice President becoming Acting President. The fourth section allows the Vice President and a simple majority of the principle officers of the executive departments to decide by vote that the President is unfit for office, even against the wishes of a physically and mentally sound President.

The specifics of this mechanism are as follows:

Who gets to decide if the President is fit? It starts with the Vice President, Mike Pence. None of it can move forward unless he gives the say-so. The other cabinet members who get a vote are:

While a detailed analysis of exactly who would vote which way isn’t the point of this article, it is important to note that many of the people on this list would vote against Trump if it was the politically expedient thing to do. There are, sadly few Trump loyalists on this list.

Would Vice President Mike Pence sign-on to such a coup d’état? The desire to be president does strange things to men. We know that Pence demurred in the wake of the NBC /Billy Bush revelations, refusing to take candidate Trump’s call at the same time party leaders were privately offering to convene the Republican National Committee and dump Trump as the party’s nominee, replacing him with Pence. The Vice President’s political majordomo Nick Ayres got caught red handed leaking information detrimental to the President only to have the Vice President’s highly regarded Communications Director Jeff Lotter take the fall.

My sources also tell me that Pence has chafed over the President’s unwillingness to reverse US law when it comes to same -sex marriage and to push to overturn Roe v. Wade. At the same time the Vice President is gung ho for US attorney general Jeff Session’s push to crack down on State legalized marijuana in direct contravention of an important campaign pledge made by the President, As Julius Caesar might say the Vice President has “that lean and hungry look”.

Even if a majority of the cabinet in the vice Pres. Work to sign on to a 25th amendment removal of Trump the chief executive would have the right to appeal this decision to the US House of Representatives. At least one high-level White House aide has told me that they believe House Speaker Paul Ryan has already agreed to be Pence’s vice president in order to block such a move.

On December 6th, 2017, Donald Trump made the historic announcement that Jerusalem was to be the recognized capital of Israel. The Establishment Press almost ignored this great achievement on December 7th, 2017 and instead ran story after story about how President Trump was mentally unfit because he a couple of cough drops in his mouth. That he gave a perfect and well received speech that same day, on the 7th, honoring the fallen of Pearl Harbor was totally lost on the media that is ‘Never Trump, All the Time’.

Recently the pundits wee parsing discredited Trump hanger-on Cory Lewandowski’s recent book “Let Trump Be Trump” and selecting choice anecdotes about then Candidate Trump, while on the campaign trail. Desperate for absolutely anything with which they can use to paint the President in a negative light, Main Stream Media talking heads point to President Trump’s blunt tell-it-like-it-is nature and his proclivity for Filet-O-Fish sandwiches as a sign that the President is unstable and unfit to lead the nation.

Donald J. Trump is a fighter. He’s been down, but he’s always gotten back up and pummeled the ones who knocked him down. He’s a lion, and his true supporters know this and will back him 100%. His supporters, the heart of America, are beyond incensed at the brazen attempts to unseat their duly elected President. Many of them are no longer dreading a confrontation, but rather are itching for it, wanting to settle the score once and for all.